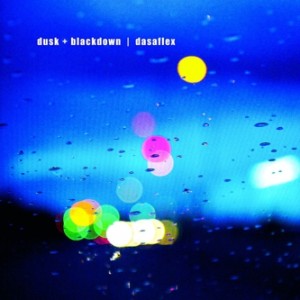 Dusk and Blackdown stepped coolly back into the limelight recently with the High Road EP – a four-tracker that featured not only an (alleged) Burial collaboration, but a handful of the duo’s own typically dark, spartan productions which would have more than merited release on their own. Compared to many producers of their generation, the pair have kept a relatively low profile over the years, their most significant statement being their debut LP, released back in 2008. Margins Music was that rare thing in dance music: an ideological statement of sorts, paying homage to London’s unique patchwork of cultures and the mutant sounds that are generated through their collision. As albums go, it was striking more for its concept than for its musical content: best enjoyed in its entirety, perhaps with Blackdown’s blog open in a spare tab for reference.

By contrast, the material found on Dasaflex seems to have been accrued in a more organic manner. It outlines the duo’s musical language as being distinctive but nonetheless familiar to observers of London’s dancefloors, drawing on a pool of sonic signifiers that resonate back through the past two decades of the capital’s musical history. As the most recent pretender to the throne, it’s only right that UK funky’s raucous bump animates the majority of these tracks – but at points you’ll also hear the dead-eyed flex of garage at its darkest; the razor-edged basslines and MIDI-string bombast of grime; and soured, radioactive synthetics harking back to the gauzy days of 2009. Throughout, sub-weight is the binding agent: crisp, smooth, finely sculpted basslines that speak with an articulacy clearly birthed in the dubstep movement that Blackdown, in his writerly mode, has so adeptly chronicled.

But, more often than not, these twelve tracks have a tendency to stray into the realms of the forgettable. ‘Wicked Vibez’, with its audacious rave horn-led breakdown, is an entirely adequate, DJ-friendly UK funky banger; elsewhere (‘Apoptosis’, ‘Next Generation’) the spark is far dimmer. There’s also, often, a feeling of dysfunction to the duo’s beats, a sense that rhythmic and textural complexity – endless adornments, subtle edits, minute percussive interjections – supplants or conceals the basic meat of the groove: as in ‘We Ain’t Beggin’’, whose rough and tumble beat doesn’t quite get the hips swaying, or ‘Hypergrime’, whose layers-upon-layers of melody seem to obscure the seed of whatever idea birthed it.

Perhaps that’s an uncharitable assessment – but if so, it’s brought on by listener’s fatigue. Clocking in at some 58 minutes, and lacking the conceptual cohesion of Margins Music, it seems inevitable that this album would have its weaker moments. What’s striking, though, is that almost every track feels as if it outstays its welcome to some degree – as if 64 bars here or there could be shaved off without any tears being shed. As a result, even the album’s moments of excellence – and there are a fair few – tend to be easily lost in the crowd, or else presented at a ponderous pace that doesn’t do them justice. There’s no doubt that Dusk and Blackdown have a worthy contribution to make to London’s dancefloors – particularly given the rudderlessness currently afflicting the scene. But Dasaflex doesn’t feel like the best platform on which to make it.