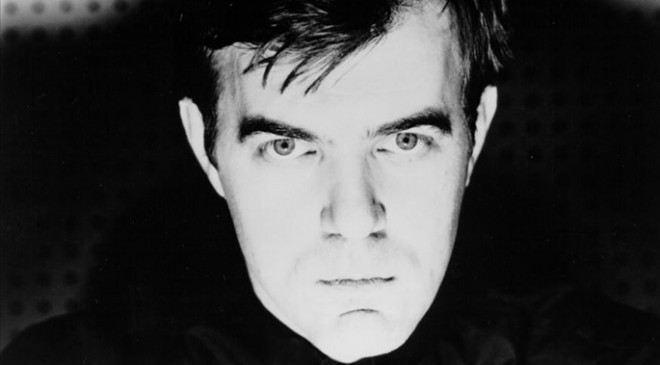 Mute have announced the release of Back To Mono, a new album by NON.

NON is the solo project of Boyd Rice, a man whose colourful career is difficult to adequately summarise. He was a priest and later Magister of the Church Of Satan, has written numerous articles and books (on subjects ranging from bubblegum pop to the occult, B-movies to Social Darwinism), exhibited visual art and photography, established a tiki bar (Tiki Boyd’s in Denver, Colorado) and collaborated with the likes of Death In June, Rose McDowall and Z’ev, and been persistently accused of Nazism. Last year he published his first novel, Twilight Man, through Heartworm Press.

Heartworm Press founder and Cold Cave frontman Wes Eisold features prominently on the new NON album: he produced the title track at Cold Cave’s Philadelphia studio, and also recorded a new version of Rice’s 1978 track ‘Watusi’. Z’ev and New York producer Bryin Dall (Thee Majesty, Hirsute Pursuit) also contribute. The album is billed as a return to Rice’s noise roots, and as well as new material there are a clutch of unreleased studio and live recordings from the late ’70s included, not to mention a cover of The Normal‘s ‘Warm Leatherette’ – “The best electronic pop song – bar none,” according to Rice. “I bought that single fifteen minutes before meeting Daniel. And that meeting changed my life.”

Daniel is of course Mute founder Daniel Miller, who launched his label with the legendary ‘Warm Leatherette’/’T.V.O.D.’ 7”. Rice’s association with Mute is long-standing: his 1977 self-titled debut, also known as The Black Album, was reissued by the Miller in 1981, and there have been seven NON albums released on the label since. Back To Mono is the first NON full-length since 2002’s Children Of The Black Sun.

Says Rice of the new record and its pre-history: “I was doing sample-based music about a decade before the advent of samplers, when everyone else was using bass, guitars, keyboards and drums. It has been said that I invented the first sampler. Perhaps I did. At the time I called it the N.M.U. (or noise manipulation unit). It allowed me to essentially sample numerous tracks of noise and mould them into rudimentary rhythms. This was my principle instrument for a good many years and can be heard on Back to Mono, in the late ’70s archival recordings.

“Back to Mono was my attempt to demonstrate that the genre I created still had room to grow; that it could still be re-imagined.”

NON will play a series of European dates in support of the album; details to follow.