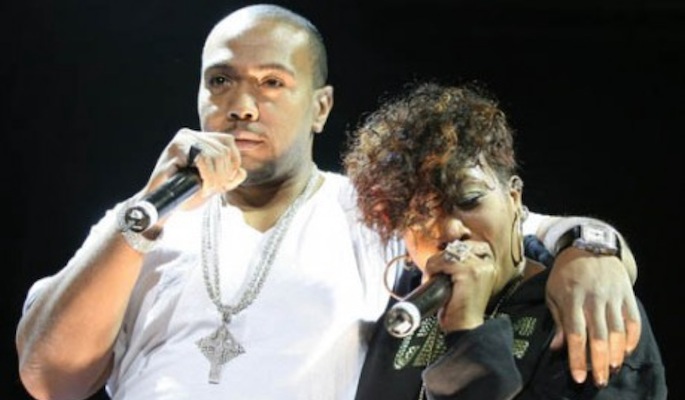 This week, longtime collaborators Missy Elliott and Timbaland premiered ‘9th Inning’ and ‘Triple Threat’. Since they last worked together, Timbaland has stayed busy as a producer and solo artist; Missy has not been as prolific, due in part to suffering from Graves’ disease. Thankfully, with her health in better shape, the duo has gotten back to work on Elliott’s Block Party, set for release before the year is out.

The Virginia Beach natives got their start in the early 90s as part of Jodeci-founder DeVante Swing’s Swing Mob, a collective that included fellow R&B/hip-hop acts Ginuwine, Magoo, Playa, Darryl Pearson, and Tweet. While the pair had some minor songwriting successes with Swing Mob, they didn’t become hitmakers until joining up with Aaliyah. Missy and Timbo produced nine tracks on her second album One in a Million, including ‘Hot Like Fire,’ ‘If Your Girl Only Knew’, and the title track.

Still, the duo was always at their finest when collaborating on songs for Missy’s solo career. The iconoclastic phenomenon is the most decorated woman in hip-hop, with six platinum albums and a five year run of hit singles that defined urban radio. And while Missy shifted the paradigm for female rappers, Timbaland’s groundbreaking production was equally — if not more — crucial to the sound of hip-hop and R&B. To celebrate the new songs from this legendary duo, here are their seven finest collaborations (where either is the featured performer).

This is where it all started. The shifty breakbeat, a suggestive baseline, and a classic soul sample (from Ann Peebles’ 1974 single ‘I Can’t Stand the Rain’) set the stage for Elliott’s versatile lyrical work: playful or fierce, whatever the line called for (like on the iconic yet simple “beep beep, whose got the keys to my jeep?”). The song even contains a statement that would define the pair’s conjoined careers: “Me and Timberland, ohh, we tango dango / We so tight that you get our styles tangled.”

The lead single off Timbaland & Magoo’s Welcome To Our World would be the highest charting track from the collaboration (while promo single ‘Luv 2 Luv U’ is probably better remembered). The song’s double time breakbeat is matched by Missy’s double time flow on her second verse. As a posse cut, ‘Up Jumps Da Boogie’ highlights each of its players equally: Tim’s beat, Magoo’s nasal flow, Missy’s many talents, and Aaliyah’s beautiful voice, as she pours out the hook like honey.

Timbaland expands his sonic palette to include everything from percussive gasps to elastic synths. This mid-tempo breakup song showcases Elliott’s smooth singing voice, a skill that is often underrated. Even if the title was destined to be dated, the song-craft stands the test of time.

The fourth single off Supa Dupa Fly features Missy as she swiftly moves between singing a chorus and rapping a verse, an ease that defines her finest songs. The video edit surpasses the original: the guitar riff is replaced by string samples from Björk’s ‘Jóga’, and Lil’ Kim is replaced by Keli Nicole Price, Mocha and Timbaland.

The pinnacle of their collaborations, ‘Get Ur Freak On’ is still as unmatched as it was over a decade ago. The galloping beat and that distinct Eastern loop are glossy, but the song is unnervingly sparse: those synths get more sinister with each iteration. Missy is otherworldly, contorting her flow and voice while re-writing the script of sexual empowerment. The loogie-hock that punctuates “Spit it out / in yo face / Open yo mouth / give you a taste” is the sound of a generation of female rappers being born.

While not as groundbreaking as ‘Get Ur Freak On,’ its squeaky loop is almost as recognizable as that song’s signature. Elliott uses her sultry voice in service of a sexual message that is just as dominant — if not as violent — as her “spit it out” charge. For his part, Timbaland massages his trademark backmasked percussion and adds some subtle arpeggios to the soundcscape. Always able to pick spot-on features and guests, Ludacris and Trina are the perfect complements.

The party-starting cousin to ‘Get Ur Freak On’ is a tribute to the old school with a futurism that only Missy-Timbaland can achieve. Bookended by classic hip hop samples, Timbo reaches for warped synths and oscillating sirens. Missy’s flow is so elastic it makes it seem as if she’s spitting that hook backwards without the aid of recording equipment. ‘Work It’ spent ten weeks at #2, never reaching #1, but it did help add “badonk-a-donk-donk” to the hip-hop lexicon.