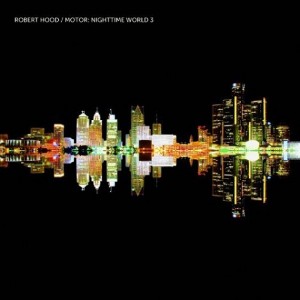 As second generation Detroit techno heroes go, Robert Hood’s profile is comparatively low. But recent full-length releases – not least 2010’s Omega, a soundtrack to 1971 sci-fi movie Omega Man – have shown the producer continuing to find depth and originality in the template he helped establish almost two decades ago. Omega was the perfect platform for Hood’s trademark brand of minimal futurism, drawing on a palette not dissimilar from mid-’90s landmarks Minimal Nation and Internal Empire: crisp, concise percussive frameworks over which synthetic micro-patterns could unfold with rare precision and ease. It’s a combination which ought to be unwelcoming, but in fact amounts to an embracing, soulful kind of hypnotism – and one whose mark you’ll still find on much of today’s techno underground.

Hood’s output is far from monolithic, though, and the Nighttime World series is perhaps the finest showcase of the breadth of his range.Volume 1, released on Cheap in 1995, and Volume 2, which found a home on Hood’s own M-Plant imprint in 2000, explore a range of tempos and styles – including jazz-indebted downtempo workouts and more intricate IDM experiments – alongside familiar techno fare. Hood now returns to the series with Motor: Nighttime World Volume 3, an album which explores similar stylistic terrain but, like Omega before it, is unified by an overarching theme. In this case, Hood tackles the rise, fall and hoped-for rejuvenation of his native Detroit, as inspired by Julien Temple’s 2010 documentary Requiem For Detroit?

The producer draws on a familiar set of stylistic touchstones to tackle his subject material: unusual broken beat constructions (the striking ‘Assembly’, and ‘The Wheel’, whose production-line percussion is overlaid with a mournful synth melody); skeletal, icy electro (the dread-laden ‘Learning’); and, of course, more straight-up techno fare. With these tools to hand, the album’s track titles suggest a linear journey through the city’s history: the likes of ‘Motor City’ and ‘Black Technician’ in the first half evoke the booming automobile industry of the post-war years; latterly, ‘Slow Motion Katrina’ points to the disastrous fate that has since befallen the rapidly shrinking city. And one can easily imagine the concept becoming clumsy and two-dimensional pretty quickly – twinkling, optimistic techno at the opening, descending into gloomy desolation at the close. But in fact, the mood is surprisingly consistent, Hood choosing to colour everything with a patina of sorrow, as if the city’s fate is a depressing, cosmic inevitability.

That is, perhaps, the failing of Motor. As the album wears on, and the tone and mood remain largely unchanged, it’s difficult to shake the sense that Hood’s chosen concept – while undeniably a righteous one – is something of an afterthought. There are points where the themes shine through (as in closer ‘A Time To Rebuild’, whose intricate, methodical percussive patterns offer up the tiniest glimmer of hope), but elsewhere they feel like a bolt-on to what is essentially another record in the Hood vein; an updating of the Nighttime Worldseries that smoothly and efficiently ticks all the requisite boxes. And while this needn’t be a negative point, it becomes one when you consider the slightly lacklustre quality of much of this material: ‘Drive (The Age Of Automation)’ pairs a razor-edged bassline with glossy melodics to turgid effect; ‘Slow Motion Katrina’ is largely formless, its noodly melodic lines an offputting distraction as much as anything; and the methodical acid techno of ‘Hate Transmissions’ gives you the sense that Hood is working well within his comfort zone. There are some fine moments here, but the album as a whole is unlikely to be much of an eye-opener for any but the most dedicated Hood fans.