“Egyptrixx could never be my only outlet.” David Psutka pursues the psychedelic sublime with new project Hiawatha

Toronto’s David Psutka is better known as Egyptrixx, a producer whose songs warp, morph, and bend electronic influences with the same creative intensity of his Night Slugs compatriots. In our review of Egyptrixx’s Bible Eyes, we noted that ending the album in a “psychedelic alternate really emphasises the fact that Psutka could go anywhere from here.”

A prescient claim, it turns out, as Psutka is taking time off from the Egyptrixx moniker to focus on the decidedly psychedelic Hiawatha, a project which will release its debut album on September 25. Joined by alt rocker Ian McGettigan (Thrush Hermit, Camouflage Nights), it’s a sonic departure that was only hinted at on previous songs, chiefly ‘Recital (B version)’ and a reworking of Earth’s ‘Old Black’ (a song that appears on the album). FACT chatted with Psutka about the evolution of Hiawatha, the recording of the album, and the challenges of adapting Bible Eyes on the road.

I’ve read a little about your musical background; what were your influences growing up?

“I’ve been involved with music in some way since I was pretty young, so the influences have been varied. As a teenager I listened to a lot of music; I was really into black and death metal. I had a riff band with my twin brother in grade 6; we played in assembly at school. Just riffs — pre-adolescent Sunn O))). For a while, about from 13 to 25, I was playing in noise-y bands and then I grew fed up with the ‘band experience’. That was when I started making electronic music, as Egyptrixx.”

How did this collaboration come about? It’s a bit of a departure for you guys.

“I started working on new Egyptrixx material last fall and realised it was something else – I needed another outlet. It wasn’t Egyptrixx music. I have known Ian for a while, and he’s done a few gigs with me for the Egyptrixx project; I had done a handful of ambient sets and Ian was a part of that live set-up. It wasn’t until halfway through writing the record that I fully realised what the project was and how it was different from what I was doing with Egyptrixx. It was a gradual understanding, and in fact it wasn’t until we got in the studio to record and produce the album that the concept became clear to us.”

“I started working on new Egyptrixx material last fall and realised it was something else. It wasn’t Egyptrixx music.”

“It was an interesting hybrid: Ian is an old school analog guy and his background is with live bands and live sound, while mine is more digital and ‘in the box’. Essentially, we found a middle ground between these two positions. Some of the record was tracked with MIDI, some was recorded live. Gear-wise, we used mostly old synths and guitars — nearly nothing built after 1980, now that I think about it. But, we were using ‘modern’ recording and production techniques: DAWs, MIDI, Pro Tools etc.”

I’ve seen a quote about this as a dichotomous record – so I guess you could add those dualities to the list. 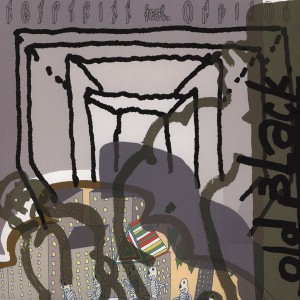 It sounds like this was a natural progression away from more “danceable” music. Was any part of it a conscious decision? Something you were trying to do different this time around?

“I toured the Bible Eyes record quite a bit — almost non-stop for 18 months — so I was ready for something a bit different. Egyptrixx music is also deliberately abstract, or void of any literal meaning or message; I wanted to write some more ‘literal’ or communicative music. I don’t think — by design — Egyptrixx could ever be my only outlet.”

How did you feel about collaborating? Aside from some vocalists, did you do much collaborating with the Egyptrixx project?

“Not really; aside from a few vocal and live collabs, it was more or less a solo effort. A good collaboration is an amazing thing, especially considering where I was at the time: burnt out from touring and a bit ambivalent about electronic music in general. At risk of sounding melodramatic, good collaborations really can be revelatory. This was a good collaboration. We’re really excited about doing some shows now.”

How would you describe the challenge of translating this to a live show?

“It’s been fine. The live translation was always in our minds during recording, so the live set has come together fairly easily.”

“Good collaborations really can be revelatory.”

When touring as Egyptrixx, was it more live sets or DJing?

“With Egyptrixx, I was doing three sets: a DJ set, a live PA, and an ambient set. I was getting gig offers that ranged quite a bit, from DJ gigs at night clubs, to techno festivals, to experimental/indie shows. It was a bit of a challenge trying to make it work in all of these different settings. Not sure how I fared, ha.”

“Touring Bible Eyes was difficult: it’s a shifty record that doesn’t fit neatly into any one genre. It was also an incredibly rewarding and life changing period of time. It just can’t go on forever obviously.” 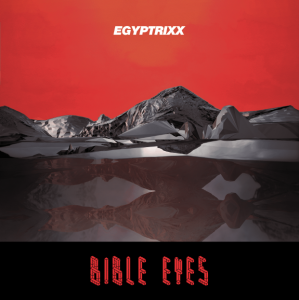 Did that cause some of the ambivalence about electronic music, or was that more from a songwriting perspective?

“[laughs] The ‘electronic music’ thing is a different story altogether.”

“Well, it was a bit jarring to – for example – be playing an experimental music festival in a museum in Madrid, and then jetting across the sea to play Hard Fest in LA. That was one weekend of the tour last summer.”

I can imagine which was a better experience.

“I’m not trying to be negative, it’s just challenging, you know? It got to the point where I was bending and twisting the songs in so many ways, I had to catch myself.”

I guess when you release an album on Night Slugs, there are expectations of what kind of musician you are, even if your album doesn’t really fit.

“How so? That it’s going to be dance music, or club songs?”

I guess more from the perspective of ‘club songs’, but like you said, the album is a shifty one. It’s still dance music, whatever that means in 2012. There’s a through-line to the Night Slugs releases, but obviously everyone is doing their own thing.

“True. Keep in mind, it’s September 2012 now, and Bible Eyes was written in July 2010. I’m not sure this concrete notion of Night Slugs as a label existed yet.”

“It got to the point where I was bending and twisting the songs in so many ways, I had to catch myself.”

Fair point. There’s great underground music coming out of Toronto, but I’ve seen you say that there isn’t a Toronto ‘scene’. Is that changing? Would that affect your creative process?

“I feel like a city that ‘produces’ good musicians and a ‘scene’ are different things. A scene doesn’t exist without some sort of apparatus. That could be a night, a venue, a label, etc. Toronto has lots of great acts and artists, but compared to a London, Berlin, or LA, there doesn’t seem to be an apparatus to qualify a scene. That said, I haven’t been here much in the last while, so I don’t want to sound declarative, but Toronto has always felt kinda isolationist to me. Everyone off on their own, doing their own thing.”

What are your favorite albums of the last year?

“I really like the last King Dude LP, KTL V is great too. Bestial Mouths have been a favorite as well. I was working with them a lot this summer and I produced their next album, great band. Tommy Four Seven as well, his new EP is awesome.”

What’s next for you?

“We’re debuting the Hiawatha live set at Brooklyn Electronic Music Fest in a few weeks, and then doing a string of canadian and US dates. I’ll be doing a handful of Egyptrixx gigs here and there, and debuting some material from the next Egyptrixx LP at MUTEK Mexico City in October. It’s a busy fall.”