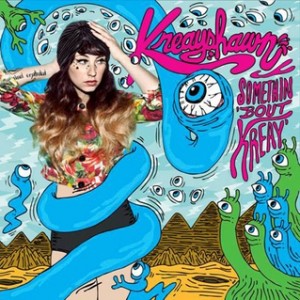 The career to date of Oakland rapper and leader of the dubiously-monikered White Girl Mob crew Kreayshawn could be seen as a cautionary tale about the velocity with which hype cycles move in the 2010s: fêted as the future and gifted magazine covers just a year ago off the back of one single, the muted response to her much-delayed debut album (read: it was a huge commercial flop) has been met by pure schadenfreude by the rap internet and the kind of people who would never usually equate commercial performance with artistic quality. Or, it could be seen as a cautionary tale about spending the year subsequent to your breakthrough hit acting like a div in too many ways for even those positively disposed towards you to ignore in lieu of making any notable new music (although let it be said that Kreayshawn was correct to call out Rick Ross – and it’s not even as if she was going after her artistic superior there).

But the big surprise of Somethin’ ‘Bout Kreay isn’t that career mismanagement has led to commercial underperformance: it’s that it isn’t the disaster that even fans of the still-irresistible ‘Gucci Gucci’ could have legitimately expected, based on all those warning signs. The bulk of the album is given over to fast-talking, shit-chatting party music – but Kreayshawn flits from style to style, much like a typical pop magpie. Much of the time, she pulls it off: ‘Blasé Blasé’ filters a retro block party beat through skittery Baltimore club rhythms and all manner of percussive pops and clicks; ‘K234ys0nixz’, despite the KMT-provoking title, is a creditable Cybotron-esque ’80s electro workout that Kreayshawn rides with the requisite nimble aplomb; the reverberating 808s of ‘Breakfast (Syrup)’ brings her up to speed with rap’s present day. Elsewhere, she dabbles in Nola bounce, Lex Luger-style elephantine synths and chunky electro courtesy of Boys Noize, with varying degrees of success. Generally, it’s rather refreshing to hear hip-hop with a bit of pace in 2012, which has seen an increasing and unwelcome paucity in rap and R&B specifically made for dancing to, a time in which a song as dreary and slow as Chief Keef’s ‘I Don’t Like’ can masquerade as the rap banger of the year.

Even with an array of often-brilliant beats at her disposal, Kreayshawn’s strategy is to foreground her personality (in line with pop’s current landscape, driven far more by all-caps CHARACTER than by technical ability per se). To an extent, one has to meet her halfway: whether Somethin’ ‘Bout Kreay holds any worth for you is dependent on how tolerable you find Kreayshawn’s deliberately bratty, obnoxious vocal style, midway between a cartoon character and a street urchin. Even if it appeals to you, her delivery – nasal, slightly nagging – inevitably begins to grate long before the album’s running time is up. But there are points of interest that take Kreayshawn beyond empty attempts at swag: note the way in which she sidesteps gender boundaries, for example. It’s long been a trope among female rappers that they can be as good (or better) than the guys, but Kreayshawn is one of the few who actually acts like a male rapper. She doesn’t present herself sexually at any point – which is itself a radical position to take; while female artists from Lil’ Kim to Trina to Nicki Minaj to Azealia Banks have all tackled sexuality in a variety of bracing ways, often simultaneously problematic and revolutionary. Kreayshawn simply doesn’t acknowledge the expectation that a woman in rap needs to talk about her body. Instead, she merely hangs with her friends, finds her hedonism in casual drug use and occasionally leers over girls. (Her own sexuality is presented as no big deal, too – though her collaboration with Sissy Nobby on ‘Twerkin’!!!’ to further queer the album up at least shows that, when it comes to gay rap scenes, Kreayshawn’s actions are louder than her words.)

Kreayshawn is by no means a fully developed artist yet – or, indeed, she may indeed be a flash in the pan; you wouldn’t count out the possibility of her shooting herself in the foot several more times before she gets a chance to show us what else she’s capable of. The irritant level of her vocals is at its highest on ‘Summertime’ – she’s fundamentally too annoying to pull off any kind of laid-back, vibed-out summer joint, though she suddenly seems like a veritable Snoop Dogg when the shrill, nails-down-blackboard chirp of V-Nasty makes its unwelcome entrance. Elsewhere, ‘Like It Or Love It’ stomps around fruitlessly in search of hook or point; Kid Cudi’s arrival euthanises the track mercifully. ‘Left Eye’ is Kreayshawn at her most witless, rewriting her underrated ‘Rich Whores’ but instead invoking several of this generation’s heroines – Amy Winehouse, Lisa Lopes, Courtney Love, Britney Spears – in a vague attempt to cast herself in their lineage. With tone-deaf tastelessness, Kreayshawn manages to take the exact angle that their worst enemies would on each.

But Kreayshawn is far from the only talented rapper to have made a patchy mish-mash major label offering of late – Waka Flocka Flame, Yelawolf and Gucci Mane are just the tip of the iceberg in that regard. She is, however, very distinctly herself all the way through. It’s natural that this should be divisive – but perhaps she isn’t quite the figure of fun certain quarters would like to paint her as.