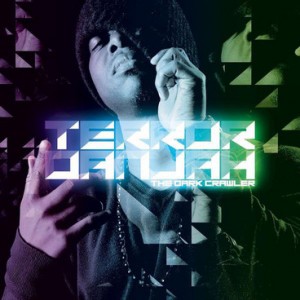 Despite its ludicrously portentous title, Terror Danjah’s second full-length album isn’t exactly heavy on surprises: it mostly picks up where 2010’s Undeniable left off, all spidery grime rhythms and video game noises. This is apt, as it can often feel like being stuck at a certain, tail-chasing level in a game. You know there are higher levels, you can even imagine what they’re like, but you can only grab at the odd glimpse of them.

Those glimpses on The Dark Crawler come, largely, in the form of vocal collaborations. One gets the distinct impression that Terror Danjah is proud of the ‘Dark Crawler’ riddim itself – rightly so; its explosions, sirens and fanfares could have come straight out of his ‘Cock Back’ days, but this doesn’t make them any less effective. It’s reprised five times here – as an intro, an outro and three interludes showcasing various MCs. It’s a neat idea in theory; in practice Riko Dan, the first MC to take the mic, slays the track so thoroughly with his fire-and-brimstone apocalyptic preaching that every other iteration seems slightly redundant. Mayhem attempts to recreate ‘Next Hype’, and is adequate if unambitious, though Kozzie’s exclamatory verse at least matches the riddim in energy.

But the most tantalising moments are The Dark Crawler‘s two R&G tracks. R&G was, of course, the genre that never took off – despite its alluring combination of sweetness and roughness, its potential to expand grime’s audience and the glorious few highlights it did manage to provide. Terror Danjah, one feels, was always the producer most likely to catalyse any putative R&G boom. From the delicate beauty of early singles such as Katie Pearl and Kano’s ‘Love Is Here To Stay’ and Sadie Ama’s ‘So Sure’ (both 2004) through to the thoughtful soulfulness of Ny’s ‘In The Crowd’ (2007) right up to the imperious physicality of last year’s ‘Full Attention’ (with Ruby Lee Ryder), his work with vocalists has been among the genre’s best: Terror Danjah seems to have an innate understanding of how to set off a singer’s individuality in the most effective light. And so it proves on The Dark Crawler: Meleka is dreamy and tactile on ‘You Make Me Feel’, a record that reaches doubly into the past – record scratches, but also the stuttering, raindrop-pulse rhythms of early R&B – to produce intimacy and beauty. On ‘Delicately’, Lee Ryder demonstrates why her voice is one of the most beguiling around: part porcelain swoop, part wispy sigh, she proves as effective on a track that’s more vibe (bhangra touches, drum’n’bass hints) than song as on the monster that was ‘Full Attention’.

But elsewhere, despite Terror Danjah’s attempts to keep things fresh by collaborating with different producers – Champion on the percussive, blocky ‘Air Max 90’; up-and-comer Lex Envy on the intricate ‘Mirror’s Edge’ – the rest of The Dark Crawler never feels like an essential release. Why, when Terror Danjah is capable of tracks as life-changing as ‘Full Attention’, does nothing on this album come near it in quality? Who needs to hear him utilising the same old sonic palette yet again on the thoroughly pointless ‘Rum Punch’ or ‘Moschino’? Even when new ideas poke their way through, the knowledge in the back of your mind of how great a Terror Danjah album in 2012 could and should be sours the tight-lipped lack of fun on display here.