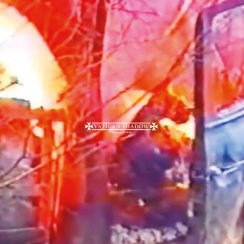 Dominick Fernow has cited Modern Love signings Demdike Stare as a chief influence on his Vatican Shadow project, alongside fist-pumping industrial techno of the Regis variety, so his signing to the Manchester label for Ornamented Walls seems apt; particularly given that the project’s finest releases have tended to draw more heavily on the former. Coupling pared back synthscapes with titles and imagery referencing the war on terror, Vatican Shadow is a deeply ambiguous beast: it’s rarely clear whether we’re being presented with an impassioned critique of modern conflict or are simply privy to one man’s lurid obsession with the grotesquerie of asymmetric warfare.

But it’s the ambiguity that makes this project so fascinating, the oblique yin to the confrontational yang of Bermuda Drain, released last year under Fernow’s Prurient alias. It’s fitting, for music that addresses a conflict in which a drone pilot in Arizona can kill dozens in Pakistan at the touch of a button, that VS releases can be so faceless, dissociated, unforthcoming. Still, at points a subtle pathos creeps into proceedings, a bittersweetness which is rare in Fernow’s lengthy discography (see ‘Gunmen With Silencer’, released on Blackest Ever Black, for a prime example).

Ornamented Walls, however, pushes violently in the other direction, making it perhaps the most aggressive thing yet to be graced with the Vatican Shadow name. Consisting of a series of recordings made using Fernow’s live setup – half of which were originally released as Operation Neptune Spear, a super-limited cassette sold at the inaugural Vatican Shadow live show earlier this year – this release stands apart sonically from the broader VS oeuvre. Gone is the dead-eyed sonic delicacy, to be replaced with a tape distortion-drenched onslaught of squat, primitive motifs; it ain’t pretty, but it gets the job done. The nature of the live setup – banks of tape loops triggered in sequence and processed digitally – lends itself to linear structures, and that’s something Fernow embraces: each track is a sequence of blocks of sound, varying in pace and intensity, dovetailed together with varying levels of smoothness. The results tend to undermine a sense of larger coherence, leaving you feeling disorientated – assaulted even.

Clearly, though, that’s no bad thing. The three sections that make up Operation Neptune Spear kick off the release in unfailingly abrasive style. ‘Part 1’ opens with slabs of crunchy, rhythmic noise and barely lets up for the duration; ‘2’ and ‘3’, meanwhile, are more brooding, alternating between cavernous percussive loops, scorched synth tones and occasional snatches of what sounds like Middle Eastern singing. The contrast is effective, but given the compellingly oblique way in which Fernow usually addresses his subject matter, the use of such identifiable source material here feels a bit overly literal; the lazy invocation of an exotic “other”, perhaps. Still, the latter half of ‘Part 3’ redeems things with a succession of industrial techno loops that climb to a gurning peak of intensity.

The remainder of the release explores a broader dynamic range. A new version of the majestic ‘Cairo is A Haunted City’ is radically different: Fernow slows the whole thing down to a crawl and overlays it with an interminable metallic drone, so that when familiar sweeping pads appear towards the end, crumbling under the weight of distortion, the glimmer of recognition is only fleeting. ‘Church Of All Images (Church Of The NSA)’ follows a similar template, replacing the original’s comparatively vigorous sense of purpose with an oppressive, greyscale gloom.

The remaining four tracks range from monochrome miniatures (the minute long distortion-loop ‘Yemeni Telephone Number’) to deliciously unsettling beatscapes (‘Boxes Were Wired To Batteries Then Loaded Into A Brown Toyota Cargo Truck’), at points overlapping and sharing swatches of material with one another. Individually these tracks feel embryonic, even slightly flat – particularly compared to the considered minimalism of studio-recorded VS releases. But this record’s intention is clearly different; when taken as a whole, the visceral potential of Fernow’s live show becomes all too apparent.