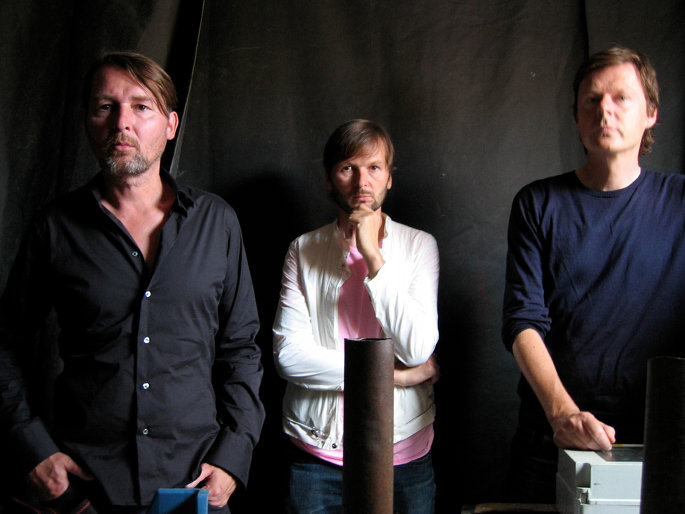 Berlin outfit To Rococo Rot are getting some much-deserved reissue love.

The trio, made up of brothers Robert and Ronald Lippok and Stefan Schenider, specialise in prim instrumental post-rock with plenty of digital inflections. Although their work tilts from electro to folk to glitch, a particular sensibility inheres across their charming canon; like affiliated (and similarly excellent) spin-off Tarwater, there’s a whimsical, brittle quality at play.

City Slang are about to reissue three of the band’s more elusive LPs as a box set. Rocket Road will collect 1997’s Veiculo, 1999’s The Amateur View and 2001’s Music Is A Hungry Ghost (with turntablist I-Sound), all of which have been out of print for some time. The set comes bundled with twenty bonus tracks, a Mira Calix remix and dense liner notes. Perhaps most enticing of all is the promise of two new remixes from Four Tet and Mute’s Daniel Miller, both of which are to see release on a special promotional 12″.

Kieran Hebden takes on Veiculo‘s ‘He Loves Me’, adding sparkle and shine to the spartan original. Miller, meanwhile, has clubbed up with producer Gareth Jones to take on The Amateur View‘s delicate ‘Cars’, which was also included on Rough Trade’s great 2002 compilation Electronic 01. The result is being touted as a “Krautrock Disco Truck”.

The remix disc is due on November 5. Rocket Road, meanwhile, is due on November 19 as a CD box set. Each of the albums in question will also be reissued on 180g vinyl, complete with a CD copy and bonus tracks. The video for The Amateur View cut ‘Telema’ is included below.