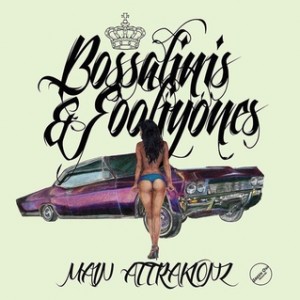 Available on: Young One LP

Getting signed can do funny things to rappers. Take for example, Tyler, The Creator. Here we had a bonafide wonderkid on a two year run of unfailing brilliance, but who after signing to XL seemed spooked by the significance of a ‘label debut’. On the tired Goblin, as if preoccupied with justifying his new status, Tyler largely jettisoned the synth-gothica that had made up much of his debut, Bastard – an genuinely original, distinctive hip-hop style (see also Danny Brown’s ‘Die Like a Rockstar’). And original ideas are rare in this day and age, though especially ones conceived by the outsider, for the outsider.

Which brings us to ‘cloud rap’ – the style associated with Main Attrakionz, Clams Casino and more. The sound combines narcotised textures and melodic sweetness with glassy piano loops, tinkling effects and glamourous female vocals. More a case of ambient sound-scaping than beat’n’fx, it’s a vaguely abstract production style in that it’s non-representational of ‘the streets’, as has been hip-hop production’s traditional remit. On the other hand, complementing or even surpassing the need for lyrics the production is also expressionist – in Main Attrakionz’ case, an external environment made in the image of their interiors. It’s their watercolour dreams turned inside out; hyper-tactile songs that progress with a blissful lack of purpose, suggestive of the ennuied inertia of street loitering and compounded by the duo’s dissolving flow. On the fringes of that great breeding ground for disaffection, the Pacific North West, what has emerged is the voice of the outsider, marginal both in sentiment and sonics.

There really is little like it in the genre, and at its most delicate the sound is able to readjust the way hip-hop has traditionally processed hardship. Coming to full fruition on past album 808s and Dark Grapes II, the sound channels ’80s decadence, even going full yacht-rock on the sax-sampling ‘Mondre Mo Murdre’. A form of ‘black acquisitive fantasy’ more intoxicating than even the most materialistic coke-rap, when this degree of luxury is juxtaposed with the tragedy-filled lyrics and melancholic beats, a sad disconnect opens right up between the young duo and the lifestyle they eternally yearn for; a life that for underclass America is nothing more than, yeah, a cloud dream. Like many black music forms, from disco to Belleville techno to ambient jungle, cloud-rap responds to adversity by using art to build an alternate reality of opulence and improbable space.

Fortunately, on their label debut proper not only have Main Attrakionz protected their singular creation, they’ve also reaffirmed their style as something entirely new. Although, three tracks in and you’d swear they’d blown it. Swapping indie producers for Gucci Mane and the likes of Soulja Boy producer Zaytoven, there’s a strategy at work here to relieve the boys of their ‘net-wave’ tag, and attract mainstream fans. Or rather “position [the duo] in a more urban way’ as Young One boss Nevona Friendman put it – in short, ‘more gangster, less feminine ‘. Thankfully, in practice the refurb is contained to an opening trio of g-funk tracks (two of which come produced by bullish Bay Area duo The Mekanix) and two clunky club tracks from rising star Harry Fraud. Predictably, the style normalises the duo, while the punchy dynamics are either ill-matched to the languid flow or elicit a forced swagger in the duo’s demeanour. The Zaytoven track, meanwhile, is unromantically minimalist next to 808s’ sound, while ‘LFK’, with its boastful lyrics, errs on the side of peacock-ing alonside, as opposed to subverting, the Tokyo-decadent backdrop. Fortunately, of the 17 tracks here the rest are pure cloud, and if the album never quite reaches the tune-packed heights of 808s, the overall listen is utterly melting.

Produced by Supreme Cuts, the appropriately titled ‘Take You There’ offers a transporting mix of washed-out piano and vinyl-fuzz bass; depicting a lost Sunday back in Oakland where, after touring America last year, the duo wait for their lives to start again, with time away from ‘the hustle’ to contemplate the future. ‘You know I hope for the better, pray this shit come together’ confides Mondre Man, ‘when I get this money I’m coming right back to Oakland.’ Produced by J-Pop fixated local boy Uptown Greg, ‘On Tour’ is similarly daydream-y, lyrical blues guitar and starry synth-bells recalling The Weeknd’s ‘The Morning’ or Frank Ocean’s ‘Forrest Gump’. ‘Wings’, meanwhile, is a headily melancholic affair featuring fellow Green Ova member Shady Blaze. Packing a classic soul feel, trilling piano and high flute buttress the refrain of ‘If I had wings I would fly, and never leave the sky / if I had a lifetime of dollars I’d give my family power, makin sure we all could live right.’ This is rap before the bling arrives, the duo too sincere to feign otherwise.

‘Bury Me A Millionaire’ is trap with art gallery strings and ‘Cloud Life’ blends cloud-style with overcast shades of Warren G’s ‘Regulate’, while highlight ‘Love Is Life’ is another Supreme Cuts production and the duo at their most humble and beatific. With the first words you hear ‘Took a lot sacrifices to do this shit’, Bossalinis & Fooliyones’ most ‘cloud’ track drifts on swallowing bass, draft-y finger-clicks, spare 808 snare and the album’s most angelic sound – a three note chime under which Squadda whispers ‘I think I made it, but then why do I feel so degraded?’ as if it’s a shameful secret. With their voices vanishing in the Blue Nile-via-PM Dawn drank-rap and under a cluster of vocal confusion, thanks is given to the paternal Shady Blaze, who seems a spiritual rock for them as much as, undoubtedly, making music is. As Mondre puts it, on choral-synths closer ‘Cloud Body’: ‘Cloud rap / it’s that shit you could trust’.