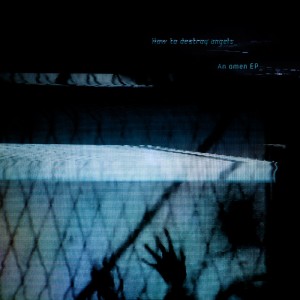 How to destroy angels_ premiered in 2010, emerging from the still-warm ashes of Nine Inch Nails, the career-defining project Trent Reznor had decided to make “disappear for a while” in 2009. HTDA joined Reznor with his new wife, Mariqueen Maandig (a vocalist for the psychedelic rock group West Indian Girl) and frequent collaborators Atticus Ross and Rob Sheridan. They even tipped their hats to their forefathers, taking the band’s name from a Coil single. If fans expected a departure from the industrial meditations on which Reznor had made his name, the band’s self-titled debut quickly put those thoughts to rest. Apart from the inclusion of Maandig’s vocals, How To Destroy Angels easily fit in the Nine Inch Nails oeuvre.

For the most part, the band’s An Omen_ EP continues on that path: its six songs are infused with the staccato percussion, tortured guitar and synth mutations, razor-sharp, sawtooth bass lines, and oblique, hopeless lyrics that have defined Reznor’s twenty-odd year long career. Even the melodic themes and modes that have dominated Reznor’s work since his 1999 opus The Fragile remain.

Even if How to destroy angels_ are simply tweaking a long-established formula, rather than clearing the chalkboard, An Omen_ still presents a band that has mastered the task at hand. Lead single ‘Keep It Together’, with its gurgling bass and ruptured industrial drums, finds Reznor and Maandig locked into an otherworldly duet. The same can be said of ‘On The Wing,’ a similar composition with a surprisingly sunny vocal melody (am I the only one who hears a phrasing that is oddly reminiscent of “I can see clearly now the rain is gone”?).

After the submerged, instrumental interlude of ‘The sleep of reason produces monsters’, the EP closes with a pair of songs that recall the supersaturated marches to the gallows of The Fragile (namely ‘Into the Void’ and ‘The Mark Has Been Made’). Layer after layer of sound, each somewhere between the organic and the synthetic, is added, as Reznor and Maandig trade incantations pulled from the Nine Inch Nails lyric book.

With all that said, the finger picked strings of ‘Ice Age’ is a refreshing change of pace. The song views folk through the prism of Nine Inch Nails, allowing Maandig to explore the more soothing side of her singing voice. At seven minutes in length, ‘Ice Age’ patiently builds to a climax that squeals with feedback; here’s hoping that the band’s forthcoming full length deviates from the script in such surprising ways.

It is impossible to view How to destroy angels_ without Reznor’s work as Nine Inch Nails looming large in frame. As much as HTDA has been billed as a band and a collaboration, as much as Reznor has evolved over his twenty year career, some things have not changed since he proclaimed “nine inch nails is trent reznor” in the liner notes of Pretty Hate Machine. How to destroy angels_ proves that for most artists, even those as accomplished as Reznor, it takes more than a new name or a personnel change for reinvention. And with more music and touring due from Nine Inch Nails in the near future, it looks like Reznor is learning what his 90s alt-rock contemporaries Billy Corgan and Chris Cornell have realized: the first cut is the deepest.

Tags: How to destroy angels_Columbia