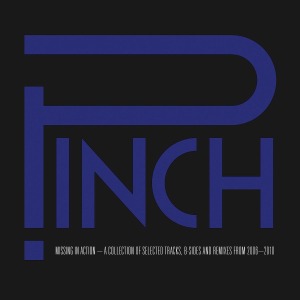 Between Missing In Action 2006-2010 and the recent Purple Legacy, it seems that certain sectors of Bristol’s dubstep community are finally, in 2012, indulging their nostalgic urges. But where Gemmy’s retrospective of the Purple sound was a self-congratulatory exercise that ultimately served to underscore the shortcomings of its protagonists, Pinch’s effort is on much firmer ground.

For one thing, the veteran producer and Tectonic boss already has an excellent album to his name – one of the few dubstep LPs, in fact, to do the format justice – in 2007’s Underwater Dancehall: a collection of instrumentals and vocal collaborations that simultaneously made explicit the music’s roots in the dub tradition and expanded on its formal possibilities. For another, Ellis, unlike the Purple crew, has succeeded in warding off the cold hand of irrelevance in the intervening years: even if he’s undeniably been one of dubstep’s traditionalists, holding on to its sonic signatures long after the majority of his peers left to seek housier climes, his productions and A&R decisions have continued to hold sway over the wider scene.

Recent years have seen Ellis undergo a metamorphosis of sorts. Last year’s ‘Oh No Not Another Dubstep DJ Playing House Music’ mix – a promotion for the half-dubstep half-techno Fabriclive 61 – seems to sum up Ellis’ feelings on the subject: a sense that the shift to slower tempos is irresistible and yet somehow undesirable, a grudging capitulation to forces beyond his control. Still, the Fabric mix, along with last year’s collaborative LP with Shackleton, indicates a willingness to venture into the unknown – even if it’s coupled with an assertion that any new ideas will have their roots planted firmly in the old.

MIA, then, could perhaps be seen as a marking of the watershed between Pinch the dubstep standard-bearer and Pinch the reluctant embracer of the new zeitgeist. It collects a range of productions released on labels other than Tectonic between 2006 and 2010, a period during which Bristol’s creative momentum migrated from dubstep-techno gene-splice experiments to more overtly house and techno forms. What’s immediately striking about the compilation, though, is how unified it sounds. From opener ‘Qawwali VIP’ (the undoubtedly inferior, but still pleasant, B-Side to moody scene anthem ‘Qawwali’) to a 2010 remix of Emika’s ‘Double Edge’, the sound palette is consistently, and distinctively, Pinch: withdrawn, greyscale atmospherics; dead-eyed sub weight; halftime rhythmic patterns with a lithe twitch.

That’s not to say that Ellis doesn’t respond to the shifting sands of taste. ‘136 Trek’ and a remix of 30Hz’s ‘Mutate’ represent the apex of Bristol’s flirtations with Berlin dub-techno, both riding on a measured, throbbing wall of kickdrum and subbass – a sound which was hugely influential at the time. ‘Motion Sickness’ and ‘Attack Of The Giant Killer Robot Spiders’, meanwhile, are built around an uneven, bombastic swagger that is uniquely of their era, a time when dequantization was becoming the dominant aesthetic. Still, Ellis tempers the nascent playfulness of the sound with acres of reverb and distant, icy melodics – a far cry from the Ikonikas of this world.

Other striking moments see Ellis transcend the boundaries he’s set himself: ‘E.Motive’ was a rare moment of melodic expansiveness, and a highlight of Mary Anne Hobbs’ 2008 compilation Evangeline; a remix of Nusrat Fateh Ali Khan & Ghaudi’s ‘Dil Da Rog Muka Ja Mali’ is the only production here that strays from dubstep’s tempo locus, bumping along at a low-slung 115bpm. Beyond the halfway point, though, sameness begins to overtake difference. The inclusion of the distinctly 2007-sounding ‘Elements’ (actually from 2010) is particularly odd, given that its A-side, ‘Croydon House’, was Ellis’ first foray into house tempos and a significant landmark in his embracing of the new.

MIA is a solid compilation, then, but not a mercurial one. But perhaps that is to Ellis’ credit: rather than depicting a producer suffocated by his legacy, it comes across as a shedding of skin, a purification ritual ahead of some fresh creative chapter. There’s no doubt that Pinch still has plenty left to offer.