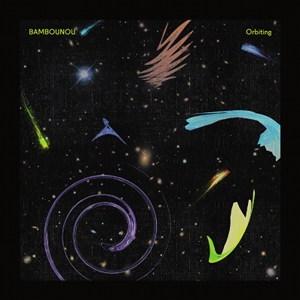 Like some of the artists that find themselves a home on Modeselektor’s 50 Weapons Label, Jeremy Guindo (better known to the likes of us as Parisian producer Bambounou) has a bit of a knack for genre-hopping. Ahead of recording his debut LP, Orbiting, Guindo has toyed with UK Funky and kwaito-esque melodies on YounGunz; Detroit-esque vocal cuts, gliding synths and ghetto 808s on ClekClekBoom; and, most recently, Untold-referencing minimalism in that notoriously murky area that exists between dubstep and techno on his debut effort for 50 Weapons, the Cobe EP. Yes, this sort of sonic-vagabond behaviour isn’t always a good thing — unpredictability often flirts dangerously with inconsistency and identity crises after all — but Bambounou has thus far proven to be subtle in his execution of it, projecting a personality that’s bold yet surprisingly tight in his music. On his first album, Guindo solidifies his reputation as a playful experimental sort with a penchant for the occasional mind-bending riddim.

The Parisian certainly wastes little time in twisting heads. Following a functional intro piece, Bambounou jumps right in with the low-end oddities on ‘Any Other Service’, a track purportedly composed for French Fries’ birthday and, in its initial form at least, loosely based on the ‘happy birthday’ melody. This ain’t no celebratory jam in the traditional sense, mind — more a hollowed-out skeleton, rubbed up the wrong way by a bassline that’s been ferociously beaten with the crazy stick. Remember that face you made when you heard ‘Stop What You’re Doing’, or ‘Cactus’ for the first time? This is one of those tracks, and a notably early peak in the album.

Of course, making mischief and/or melting faces aren’t by any means Bambounou’s primary intentions. Though it has its moments of dancefloor silliness — the French Fries featuring ‘Let Me Get’ boasts an excitable footwork section complete with a vocal cut about as tasteful as your average DJ Assault tune — the album’s focus is mostly on, as the title and artwork heavily implies, space.

As with the Cobe EP and to some extent his ClekClekBoom 12”, there’s a techno pulse throughout Orbiting, culminating in the dank and lengthy ‘Data’, and threatening to explode on ‘Off The Motion’. But, like much music associated with space — consciously or otherwise — it’s the synth-driven material that reigns supreme.’EX06’, a mid-album arpeggio interlude recalls Kuedo’s beatless moments from last year’s Severant and the more sinister moments from Daft Punk’s Tron: Legacy soundtrack, while the second half of ‘Great Escape’ is a lush cruise across a beach-side resort on a faraway planet with several suns blazing. While a large portion of the LP sounds like a continuation of his earlier work this year, these tracks point optimistically towards something a little different once again, while still managing to fit under that increasingly hard-to-define Bambounou umbrella. Very rarely does it sound awkward or contrived.