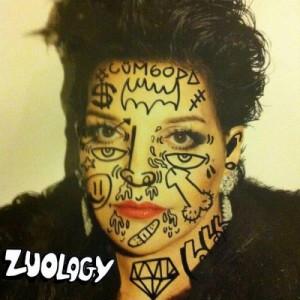 “All I do now is dick around / All I do now is dick around, dick around”. So sang whippet-thin sages Sparks on the centrepiece to 2006’s Hello Young Lovers. The Mael brothers probably aren’t a major presence in the oddball rap community – frenetic baroque pomp and lavender kush aren’t exactly a natural fit – but ‘Dick Around’ might as well be cloud-rap’s theme song. Look at Main Attrakionz’s slumberous / ponderous flow and whatever-lies-to-hand attitude to beat selection. Check serious types like Haleek Maul or Left Leberra, ambling sheepishly over formless instrumentals. And then there’s Lil B, of course, who devotes every hour God sends to the art of sounding as half-assed as possible. For a particular contingent of young bucks, sloppy experimentation is the order of the day.

In the dicking around stakes, Metro Zu are seasoned professionals. The young Miami crew – Lofty 305, Freebase, Ruben Slikk and, er, Mr. B The Poshtronaut – have been turning out a disordered slew of mixtapes, videos and artwork since c. 2007. Some of their earlier works – see 2010’s Spank Rock-indebted Electrozlapp – are fairly slick affairs, but recent years have seen them make a concerted effort to sound stranger, sloppier and stupider. Papes N’ Vapes Vol 1 (with Shuttle Life) was a dreamy collection of starry-eyed shroom-bap. This year’s breakout tape Mink Rug, meanwhile, was an intermittently enjoyable farrago, notable for the title track (subsequently included on SpaceGhostPurrp’s landmark God Of Black tape) and loopy pimp anthem ‘Sell Ma Hoe’.

Zuology follows on from the whopping 77-track Heaven tape. As the title suggests, it’s their definitive record, a neat distillation of the group’s (self-evident) talents and (manifold) flaws. After some years of panning around, Metro Zu have finally found their formula, and it’s pretty distinctive: be as incessantly randy as possible. Ladies and gentlemen, say hello to trillwave’s answer to Luke.

The potty talk is difficult to avoid, but it’s actually something of a red herring; waft aside the pheromones, and it’s clear that the production is the real draw here. For the most part, Zuology is a fine example of the voraciousness that seems to characterise hip-hop’s web-savvy young breed. It’s an insatiable record, and not just in a sexual sense: Metro Zu hoover up electro, ambient, chiptune, drone, demand more sounds, more influences, more data to process.

‘X-Ray’ is a sing-song party jam soundtracked by a Geiger counter, and rattling fusion number ‘Sense’ nods towards Yesterday’s New Quintet. ‘Amsterdam’, ostensibly culled from the same sample source as Actress’ ‘R.I.P’, winks and twinkles. Best of all is the strobing ‘Nekk Up’, a sleek club cut with touches of Steve Reich and an insistent bassline. There are missteps – rawk pastiche ‘Cokeworld, USA’ is the sort of pug-ugly mostrosity you’d expect from a bad DJ Shadow album – but, for the most part, it’s the best sort of patchwork.

Zuology, then, creates a curious dialogue between high and low. The lyrics are in defiantly bad taste; the music showcases surprisingly good taste. Dicking around, though, has its occupation hazards, and Metro Zu are often too juvenile for their own good. For all the yucky fun, Metro Zu’s sexual politics are a problem: sniggering rape references aren’t funny, they’re ugly. Moreover, Metro Zu’s roster of rappers are just too pimply, too spoddy, to really fall for. The mock la-di-da flow on ‘SUPR SECRET MEETING’ is very, very annoying; anything resembling singing proves grating in the extreme; and a line like “your pussy smell like pulled pork” is just about unforgivable. The constant oscillation between goofy and porny – see the ill-advised ‘Ekans’ – is a serious buzz-killer, and points towards a major maturity deficit. There’s a sense that Lofty’s mum could enter at any moment with a plate of flapjacks.

Zuology isn’t going to go down as an important record: the cock-tastic cover art and the constant flubbing suggest an album designed to be enjoyed and swiftly discarded. In its own way, though, it’s a perfect test case for where hip-hop’s psychedelic vanguard find themselves in 2012. Zuology is brazen in its diversity, and frequently probes the sort of interesting sweet spots that would have been thoroughly off-limits a couple of years ago. As with Lil B, the spirit of jeu is infectious (the crew, incidentally, have their own equivalent to the Based creed – the deeply unappealing ‘Po$h’). Yet, for all the invention on display, Zuology is a reminder that kids goofing around on computers sometimes sound like, well, kids goofing around on computers. Not everyone’s a Lil’ Beethoven.