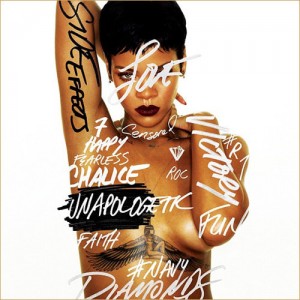 When Rihanna released her sixth album in seven years, Talk That Talk, last year, she revealed that it was mostly recorded in a mobile vocal booth carted around the globe with her on tour. She would habitually come straight off stage and head into it all night, finishing up around 8-9am, and sleep during the day. It’s one of the most extreme examples of the seemingly superhuman stamina that’s been on display once more in the run-up, exactly a year later, to her seventh album: a work promoted mostly by means of the nightmarish-sounding Rihanna Plane press junket-turned-endurance test.

Rihanna’s work ethic is awe-inspiring and faintly horrifying, but the cost to her music has been evident. Talk That Talk was the pop equivalent of churnalism or pink slime, reconstituted sounds ground up and secreted into the world as soon as the songwriters had hit on the most basic of hooks and a lyric to bolster its singer’s relentless, one-note reminders that she didn’t give a fuck what you thought. It was all rather wearying.

Unapologetic, inevitably, also contains several elements of churn: lead single ‘Diamonds’ is an undistinguished midtempo track whose entire composition seems based on stitching together Rihanna buzzwords; ‘Right Now’ is a boilerplate Guetta thudder; ‘Loveeeeeee Song’ is a boilerplate Future space ballad with an unforgivably stupid title; frequently, Rihanna seems as if she can barely be arsed to connect to the songs emotionally, opting instead to blare out ragged, aimless vocal performances. (“Just going through the motions / I can’t even get the emotions to come out,” she intones on ‘What Now’: too bloody right.) But, surprisingly, it also contains some of her most interesting, effective material since 2009’s Rated R, still her finest album.

On opener ‘Phresh Out The Runway’, Rihanna sprays declamations like machine gun fire over what could pass for a lost early ’90s Prodigy rave anthem. At the other end of the scale, she hangs over the thick, beatless synth clouds and clicks of ‘Get It Over With’ in a frustrated stasis: “Won’t you just fucking rain?” she sighs longingly. What she’s longing for remains vague, and in this case it’s a strategy that serves the song – as is her emotionless delivery on the pinch-lipped ostensible paean to strip clubs and dollar signs, ‘Pour It Up’: Rihanna goes through mere scornful contempt and terrifies with her blank, relentless focus.

Even when Unapologetic fails, it often does so in interesting ways: ‘What Now’ veers between an AOR piano ballad and Godzilla-scale electronic explosions, sadly failing to alight on a tune. The clip-clopping beats and brostep drops of ‘Jump’ would make for an album highlight, but merely singing the chorus of ‘Pony’ as the song’s hook is a lazy tactic that turns it instantly into filler. ‘Love Without Tragedy / Mother Mary’ is a seven-minute The-Dream / Los Da Mystro epic: if only the dramatic, gorgeous, Fairlight-propelled opening two minutes were extended to all seven instead of sinking into directionless drift.

When it comes to wrecking serviceable songs, though, nothing else on Unapologetic matches the song whose shadow looms, unignorably, over the entire Rihanna project in 2012. The presence of the words “Nobody’s Business (feat. Chris Brown)” is a neon flashing trollgaze warning sign, and no one emerges from it well. Not Rihanna, who presumably wants to come across as defiant but whose insistent backtracking on the initial leadership she showed on domestic violence is becoming ever more unpalatable. Not anyone at the label who greenlit the track, or who continues to feed the “doomed romance” narrative that informs the way in which Rihanna and her abuser’s relationship is playing out in the media and in her songs. Not the fans or critics who shrug and say “well, it’s a good song” as if it was possible to divorce it from its context, or as if this wasn’t a form of enabling in itself. Not writers The-Dream and Los Da Mystro, and not the Michael Jackson estate for licensing the sample of ‘The Way You Make Me Feel’ that’s entirely responsible for the cut’s not-inconsiderable pop effectiveness. Not Brown, obviously, though in a backwards way we should be thankful that his gurning attempt to ape Jackson sufficiently wrecks ‘Nobody’s Business’ on a sonic level that we don’t have to wrestle with the moral dilemma of ever wanting to listen to this reprehensible thing.

It’s impossible to overlook – and, by dint of the fact that Rihanna and Brown are singing about this on her album, it’s long ceased to be “nobody’s business”. It’s a song that makes you, the listener, complicit in Def Jam, Rihanna, Brown and their collaborators and enablers continuing to flog a narrative that conflates domestic abuse and romantic tragedy. For now, it’s paying off, with the public largely ready to forgive for the sake of a basic pop hook or caught up by grandiose aeroplane-based distraction tactics. So sadly, it’s unlikely to be the last.