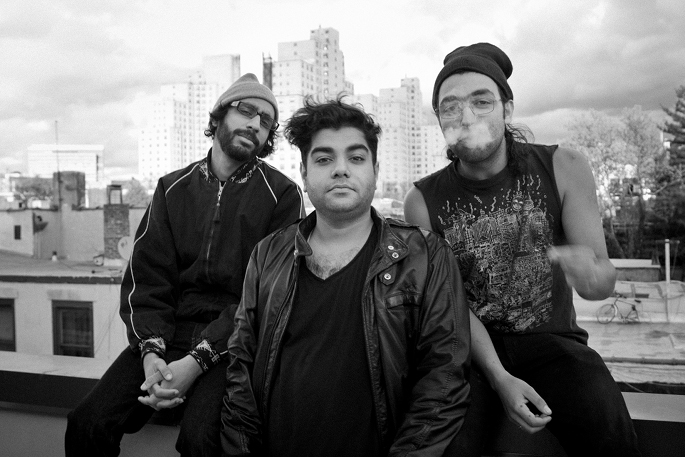 Consisting of MCs Heems and Kool A.D. (plus peripheral member Dapwell), the crew have spent the last few years establishing themselves as one of the more bookish, mischevious forces in New York rap. Following on from sort-of-novelty breakthrough ‘Combination Pizza Hut And Taco Bell’ in 2008, the pair released a pair of acclaimed mixtapes, Shut Up, Dude and Sit Down, Man, in 2010 – both characterised by rapidfire deadpan rapping and a cataract of pop culture references. Debut LP Relax, released the following year, proved a more contentious release, and the band have reportedly spent 2012 working on a new LP for Sony.

As Pitchfork report, news that the band had split was broken during a show at Munich’s On3 Festival on Saturday evening. Although the bill promised a Das Racist show, only Heems turned up for the set. Speaking to the crowd, he said: “You guys wanna know the secret? Alright, so I’m going to do some Das Racist songs, but Das Racist is breaking up and we’re not a band anymore.” Video of the grand confession is available here.

Kool A.D. subsequently took to Twitter to say: “for the record i quit das racist 2 months ago and was asked by our manager not to announce it yet. apparently @himanshu [Heems’ Twitter handle] wanted to do it tho”. The message led to some (presumably playful) back and forth between him and his former bandmate, with Heems replying “@veeveeveeveevee hah dag, my bad dont even remember saying that shit”. “u a fool for that 1” was Kool A.D.’s reply.

We can’t imagine either rapper will have too much trouble making the transition to the solo game: Kool A.D. dropped the The Palm Wine Drinkard and 51 mixtapes this year, whereas Heems has busied himself with the Nehru Jackets and Wild Water Kingdom tapes. Sit Down, Man highlight ‘hahahaha jk?’ is below.

Update: Speaking to Spin, Dapwell has offered some more insight on what’s been going at camp Racist. “I was bummed when we actually broke up, when it was done, mostly because it was a way to make money really easily. Now, I probably won’t be able to make money that easily ever again. But we had a plan to break up around May. We had just signed this record deal and we were going to put out one proper album and then go on a farewell tour, release a proper breaking up statement that could have been really funny, maybe a weird, stupid video. Now, all of that has gone to shit.”