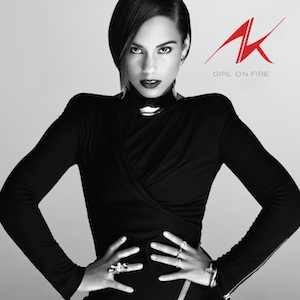 Since the release of 2009’s Element of Freedom, Alicia Keys has married super-producer Swizz Beatz and gave birth to a son, Egypt. So when Keys promised an album that represented “new beginnings, new perspectives and fresh starts” in Girl On Fire, she was describing her life and not necessarily her music.

While Keys’ voice is as smooth as her piano playing is sharp, Girl On Fire is not a “fresh start” by any means. Like Element of Freedom, Girl On Fire is full of mid-tempo ballads, rather than the piano-driven, neo-soul jams that dominated her early catalog. Lyrically, Keys relies on the same tropes she always has: the heartbreak-regret-redemption cycle, with heaps of Girl Power at the end of the rainbow. For better or worse, there are no changes on those fronts.

Perhaps lost in the midst of other major life changes was her split from longtime collaborator (and assumed love interest) Kerry “Krucial” Brothers, who had helped define the sound of her first albums. There’s an ugly trend in critiquing female singer-songwriters that places undue emphasis on their male colleagues, so it’s important to note that Keys continues to co-write and co-produce all of her music. Still, the opening of the studio to more collaborators than ever before is apparent on the album.

At times, the songwriters and producers leave indelible marks on the songs. ‘That’s When I Knew’ is a gentle R&B ballad with fingerstyle guitar and a descending/ascending chorus that just screams ’90s hitmaker Babyface. Similarly, Frank Ocean and creative partner James “Malay” Ho assisted on ‘One Thing’, resulting in a song reminiscent of the simpler moments on Ocean’s Channel Orange. The shifty ‘When It’s All Over’ moves from jazzy verses to a chorus that features a submerged house beat — tipping co-producer Jamie xx’s hand.

However, one collaboration results in the album’s finest moments: Keys’ work with Scottish artist Emeli Sandé. Their three songs are tributes to simplicity, and are strong enough to be built around Keys’ bread and butter: her piano and her voice.

‘Not Even The King’ is the most subtle of the three, as Keys’ breathy vocalizations allow the album’s most emotional song to shine through. It’s the type of songwriting popularized by Carole King and Elton John that is so absent from pop music right now, while ‘Brand New Me’ is a widescreen ballad favored by the R&B divas of a generation prior. Album closer ‘101’ combines the strengths of both: for most of the song, Keys is vulnerable — almost weeping — yet undeniably powerful. The outro, however, is a sweeping, orchestral movement whose impact would be muted if not juxtaposed against the brutal honesty of the song’s first two-thirds. Krucial Keys might be over, but Sandé Keys is just beginning.

What Girl On Fire is missing is the singles — either lovelorn or self-empowered — that helped carry Keys’ early albums. ‘New Day’ is a drumline-driven, ready-made anthem: it just feels ready-made for someone else. The title track rehashes the ‘Take My Breath Away’ melodrama that was more convincing on ‘No One’, a better song that neither utilized the well-worn beat from Billy Squier’s ‘The Big Beat’ nor opened with a middling Nicki Minaj verse. ‘Fire We Make’ isn’t bad, per se, but it apes the sensuality of songs like ‘Diary’ and ‘Dragon Days’.

With the lack of strong singles, Girl On Fire is Alicia Keys’ version of Beyoncé’s 4: a mature, ballad-heavy affair befitting her recent “fresh starts.” Despite its title, Girl On Fire is not an album by a girl: Alicia Keys is a woman, a wife, a mother, and an accomplished musician. She is not and has never been an artist like Rihanna, a vessel for dancefloor fillers and bad girl anthems. Alicia Keys is a singer-songwriter in the purest sense, and Girl On Fire is at its best when Keys (and her collaborators) remember that.