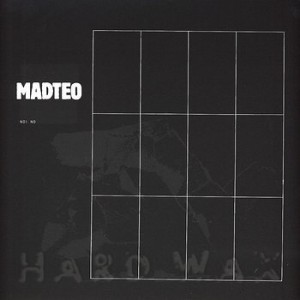 Madteo’s latest LP Noi No arrives on Finnish export Sähkö, and a moodier home for it would be hard to find. In eleven tracks, the NY-based Italian explores a highly idiosyncratic electronic music noir, bending production methods into quite intense realms of suspense, patience and abstract expression.

From the moment ‘Rut-a-Round’ enters, its squarewave organ synth managing to be both massively abrasive yet deeply sullen, the record’s tone is set. The extended beatless introduction is a struggle between this heavy voice and epic, spinning fanfares bursting around birdsong, the two constantly vying to be on top. Such tension persists in a multitude of ways throughout the record’s hour duration, its overall mood and fitfully episodic nature drawing ready comparisons to Actress’ Splazsh. Instrumentation, too, brings some similarities.

If anything, however, this would simply suggest a similar set of preoccupations; Madteo’s personality coats everything on offer in a manner quite unlike anyone else, and is strangely Romantic and hard boiled in its aesthetic. As with all of his music to date, thick tracks sprawl around surprisingly minimal content, seemingly built around an innate passion for patience and detail, small variations in parts and layers being where the most activity occurs.

The results tend to slot into loose categories: theme and variations around a single idea with no drums; largely amorphous ‘dance’ tracks; and things somewhere between the two.

The loose club tracks produce two of the stand-out inclusions: ‘Rugrats Don’t Techno For An Answer’, a ‘97-era Autechre-like beat and synth combination alongside cracked and split samples of Drake, executed in a manner that sounds neither tired nor clichéd; and ‘Dead Drop (When I Saw You That Nite)’, a deep sleep house/techno hybrid combining relentless squarewave rippling, smothered Detroit stabs and incomprehensibly reverberant vocals.

The remaining six tracks fall somewhere along the scale between these two approaches. Nearer the beatless end are dramatic soundscapes like ‘Rut-a-Round’ and ‘Bugged In Gaza’, and the odd swagger of ‘Gory Glory’, the imagined soundtrack to a neighbourhood bad boy’s brittle narrative (“I- gonna have some co- fee…pe-ple ‘ookin- at me…”).

To say Noi No is a mad ride would therefore be an understatement. While there are moments of exhilaration, these are fleeting, the vast majority of the time instead spent on presenting something obtuse in a particular medium, an opportunity for Madteo to give listeners something of himself in a different way. To take it all in at once requires the listener to pay attention closely, and committing to this is quite exhausting – not in the least because it feels like an unsolvable puzzle each step of the way. However, for someone who has toiled away at his interests for years, never changing to please others, this should be taken as a compliment. In this sense, Madteo is every bit a bebop musician of electronic production.