Nevermind: Paul McCartney performs with the remaining members of Nirvana 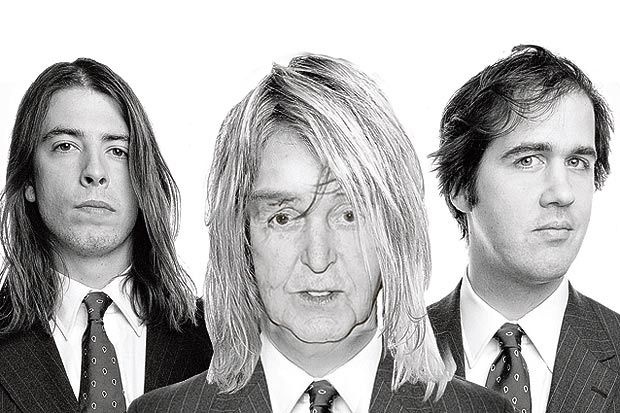 The 12.12.12 concert for Sandy Relief featured Bruce Springsteen playing with Jon Bon Jovi, Eddie Vedder singing with Roger Waters, and Kanye West performing his entire catalog in a leather kilt, but no other performance was as anticipated as Sir Paul McCartney’s.

Introduced by Django Unchained‘s Quentin Tarantino, Jamie Foxx, and Christoph Waltz, McCartney wasted no time, kicking off his set with a spirited performance of ‘Helter Skelter’. Wings’ hits ‘Let Me Roll It’ and ‘Nineteen Hundred and Eighty-Five’, Kisses on the Bottom original ‘My Valentine’, and the classic ‘Blackbird’ followed. Taking a breather, McCartney addressed the crowd.

“So recently, some guys asked me to jam with them,” McCartney said, recounting how he realized he was “in the middle of Nirvana reunion.” McCartney was then joined onstage by Dave Grohl, Pat Smear, and Krist Novoselic (who’s starting to look like a skinny Rick Rubin in middle age) to perform the result of that jam session, ‘Cut Me Some Slack’.

Novoselic had promised “a new song that’s kind of Helter Skelter meets Scentless Apprentice. It rocks with a heavy groove,” and he wasn’t totally off-base, even if the Nirvana influence didn’t show up until the song’s riff-heavy second half.

The Nirvana reunion was a brief one, however, as the band finished the song, took their bows, and left the stage. McCartney was re-joined by his regular band for ‘I’ve Got A Feeling’ and a pyrotechnic-fueled ‘Live And Let Die’. He then invited Alicia Keys back to the stage to perform ‘Empire State of Mind (Part II) Broken Down’ (the Jay-Z-less version of the song).

After the initial “that’s it?” feeling wore off, it seems that this was the best possible outcome of this unlikely collaboration. Did anyone want to see Macca tackling ‘Smells Like Teen Spirit’, or worse yet, ‘Rape Me’?