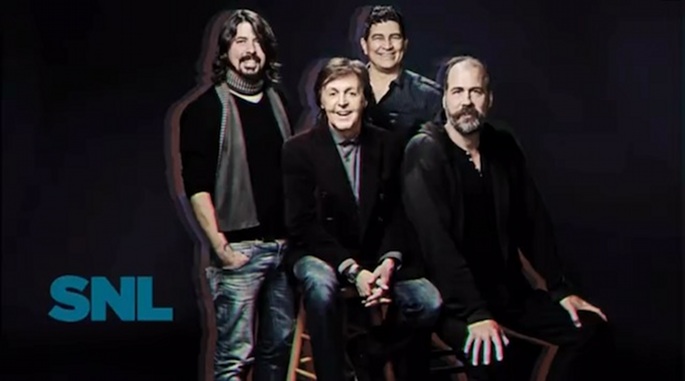 The mystery of the Nirvana/Macca team-up might have been solved, but it’s still mighty odd watching the combination in full effect.

The band reunited for the first time since Kurt Cobain’s death in 1994 for the Hurricane Sandy benefit gig 12.12.12 at Madison Square Gardens. Weirdly, Sir Paul McCartney made an unlikely appearance as frontman on new track ‘Cut Me Some Slack’. It subsequently transpired that the track would appear on the OST for Grohl’s forthcoming documentary about L.A. recording studio Sound City.

The dream/nightmare team have collaborated once again, this time on TV institution Saturday Night Live, with Nirvana 2.0 rattling through bespoke track ‘Cut Me Some Slack’. Macca also took to a piano to perform alongside Eagles’ Joe Walsh, running through ‘My Valentine’. Video of the Nirvana team-up is available to sample below. Update: The studio version is now available, as well.