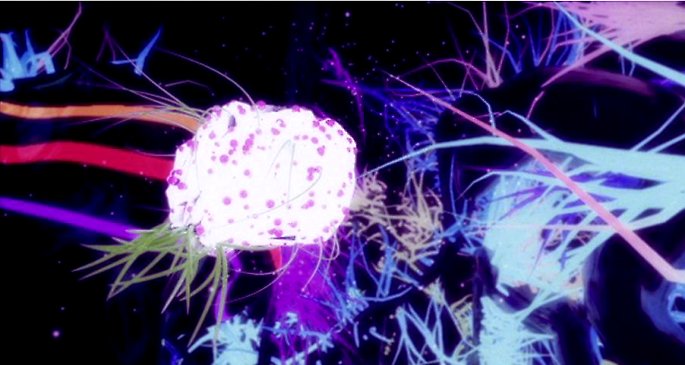 The humble music video seemed a shade anachronistic in 2012.

For many artists, it wasn’t enough to issue a visual companion piece to a track: apps, games, multi-media extravaganzas and .gif walls – not to mention that somewhat pompous conceit, the album trailer – offered fresh ways of seeing (and touching) new music.

Still, there were plenty of fine efforts to enjoy, ranging from lo-fi collage jobs (DVA’s ‘Where I Belong’) to arthouse hip-hop videos (2 Chainz’s ‘Birthday Song’) to sugar-spotted eye candy (M.I.A’s jaw-dropping ‘Bad Girls). We’ve collected our favourite clips of the year [in no particular order], and it’s a right old olio: found (and faux-found) footage, desert revelations, pitchside shenanigans, and arguably the weirdest house party ever committed to tape all feature.

‘Birthday Song’ is a surreal take on a a hip-hop video standard: the party clip. As you might expect when dealing with a hook that goes “all I want for my birthday / is a big booty ho”, there are plenty of scantily clad women, but also a booty cake, the most awkward lap dances ever, Kanye riding a cake-bike hybrid, and a bizarre gang assault on a clown.

A widescreen adaptation of Maya’s most maximalist anthem since ‘Paper Planes’. At various points, M.I.A. fronts a caravan of BMWs, leads a neon, dance party, and nonchalantly rides a two-wheeling car. The Moroccan-shot video evokes the excesses of Middle Eastern oil-barons, but the stunts are worthy of The Fast and the Furious. M.I.A.: always political, but always a show-woman, too.

A minute-long prologue portends something epic, and Grimes (who directed the video) does not disappoint. The emerging pop icon and her friends toy around with broadswords, snakes, and roman candles, while rap freak Brooke Candy plays the Lady of the Lake in armored bodysuit and platform heels. After seeing the video, the (excellent) song is almost an afterthought.

BASS CLEF
‘GHOST KICKS IN THE SPIRAL’
Directed by: Esther May Campbell

BAFTA Award winner Esther May Campbell takes the helm for this remarkable meditation on innocence sullied. The smudged, smeared clip of two young friends out on the lark tilts between ecstatic and freaky with every moth-eaten frame. Charlie & Lola, as imagined by Mark Leckey.

Zebra Katz and Njena Reddd Foxxx took everyone to school this year with their breakthrough song and video. While Zebra reads and Njena grinds, a pair of dancers in braids and ghastly, featureless masks take center stage. The slow motion clip has a horror movie feel, and not just because it features the creepiest game of jump rope ever.

Peter Serafinowicz and Hot Chip’s productive partnership really hits paydirt on their third collaboration, a delirious vision of a game of FIFA gone haywire. Pan-dimensional travel, a dribbling “space mouth” and a wonderful subversion of pitchside machismo are all part of the fun. If you thought Big Head Mode was outlandish…

More so than most, A$AP Rocky is an artist defined by his aesthetic. The ‘Wassup’ video does a remarkable job of distilling that into a purple-hued, three-minute clip, as Rocky hangs with his fashion-forward A$AP Mob and makes occult symbols out of white powder. But the usual signifiers of hip-hop grandeur — Ferraris, pitbulls on chains, drinking 40s in a bath-tub full of cash — are dismissed with a “it was all a dream” ending that jibes with his “that shit is a facade” lyrics.

We know, the song’s terrible – if the Stateside EDM explosion doesn’t have an official trustafarian’s guild yet, then ‘Make It Bun Dem’ will be the track that makes it happen – but credit where it’s due, this video managed to stick it to the man in a way that was surprisingly tasteful, not to mention attractive on the eye.

Cruel Summer was more Sky Box Office than multiplex blockbuster, but the clip for lead track ‘Mercy’ was, in every sense of the word, a widescreen affair. At its heart, ‘Mercy’ is just another standard ‘crew mooning to cam’ clip, but Nabil’s short takes the form to another level – full of cryptic details and curiously weightless, it’s as intricate as an M.C. Escher scribble.

Ninian Doff’s psychotropic video proved an ideal accompaniment for Key To The Kuffs’ woozy ode to ragaMFfins everywhere. Some natty split-screen high-jinks, coupled with an eye-melting edit from digital manipulator Weirdcore, made for one of the year’s freakier clips.

Videos from Rick Ross’s collective / label / untouchable empire™ Maybach Music Group are arguably at their most entertaining when the budget doesn’t quite stretch to the gleaming excess of the subject matter, but ‘Power Circle’ is a cracking celebration of bank balance exhibitionism. Ross struts into a press conference like a billion-dollar boxer, fire fills the air, the faders on the mixing desk move by themselves (David Copperfield!) and despite wearing what’s clearly an expensive shirt, Gunplay still looks like he got dressed in a dustbin. Extra points for the desktop background on Meek Mill’s Macbook being – wait for it – Meek Mill.

In which one of the bigger big-room acts turn the humble tungsten lightbulb into something triumphant. Hans Lo and Kate Moross’ clip comes over like a particularly funky energy saving PSA, splicing together images of lights turning on and off. It’s classy and ingenious in equal measure – a striking parade of lightbulbs, desk lamps, OHPs and fridge bulbs.

Like her co-star A$AP Rocky’s ‘Wassup’, the video captures Lana Del Rey’s essence as a hipster version of the Madonna-whore dichotomy. It opens with a black-and-white homage to Marilyn Monroe’s infamous ‘Happy Birthday, Mr. President’ before devolving into faux vintage, revisionist home movies of the Kennedy’s at Hyannis Port, with Lana as Jackie and Rocky as JFK. There’s a bit of stylistic ouroboros here, but the Kennedy assassination is a perfect stand-in for her cynical lyrical take on the American experience.

It’s chopsticks at dawn in this hearteningly goofy demonstration of how not to comport yourself down the Royal China. ‘The Baddest Man Alive’ is essentially just a Jam sketch stretched to breaking point, but it’s a jolly fine wheeze all the same – and a shade more sophisticated than The Man With The Iron Fists to boot.

2012 saw Night Slugs switch from the isometric grid to 3D rendering on some of their sleeves – Jam City’s Classical Curves, Girl Unit’s Club Rez – and the move was brought to life by videos for each of those releases: first, a trailer for Club Rez that we wish had been longer, and then this all-gold-everything sky soarer for Classical Curves highlight ‘The Courts’.

DVA
‘WHERE I BELONG’
Directed by: Dean Blunt

Like the lens-wielder his band cribbed their name from, Hype Williams’ Dean Blunt is always an entertaining force behind the camera. No fish-eyes or trout-pouts here, though: Blunt’s dismantles and reconstitutes a vintage animated version of the crucifixion narrative, and the results fit DVA’s funeral march to a T. Also deserves praise for the daftest cameo of the year – did you spot it?

In a year where David Lynch directed a video for his own song, the 10-minute ‘Epizootics!’ manages to out Lynch-Lynch with off-putting, slow motion clips of hula/swing dancers, Blue Velvet-ish flesh in a field, a pair of white shoes, and an insect creeping on a stomach.

Try to describe Lone’s music and you’re inevitably drawn to words like vivid, vibrant, colourful – you get the picture. On the trailer for the R&S artist’s latest album Galaxy Garden, Scottish animator Konx-om-Pax really hones in on the visual side of Lone’s music: both the aquatic and astronomical are accounted for, with a amoeba sent into deep space, flanked and coated in neon.

Amon Tobin’s “beat-driven bass music” project gets a darkly funny video. The stop-motion animated clip features a rogue teddy bear on a playroom rampage, leaving slo-mo explosions of blood and gore in its wake. The “aha” moment at its conclusion is its most chilling.

Old Apparatus take great care to manage their image: their press snaps are far and few between, and their Sullen Tone imprint was responsible for some of the most stunning artwork we saw all year. The remarkably voyeuristic ‘Lingle’ – a lesson in how to manipulate found footage with flair and panache – proves the point.