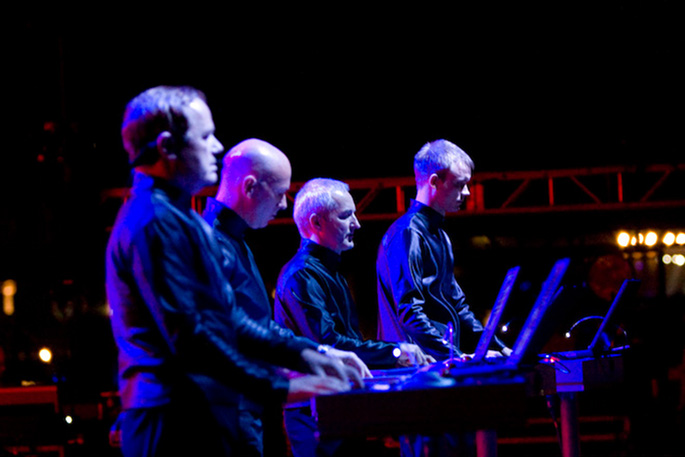 Kraftwerk’s forthcoming concert series at the Tate Modern (and the ticketing gremlins that accompanied it) has got a lot of press inches, but it’s by no means the only significant Kraftwerk story doing the rounds at present.

As The Economist report, the German band have secured a significant victory in a long-running legal battle – one that, depending on who you believe, may have major ramifications for sample-based music across the world.

On December 13, the German Supreme court ruled in Kraftwerk’s favour in a dispute involving unauthorized sampling of the group by producers Moses Pelham and Martin Haas. Remarkably, the case has been running for 12 years.

The argument centres on Sabrina Setlur’ 1997 pop-rap track ‘Nur Mir’, composed by Pelham and Haas. ‘Nur Mir’ interpolates a two second sample of Kraftwerk’s 1977 track ‘Metall auf Metall”, taken from the Trans-Europe Express sessions and used without the group’s permission. Kraftwerk’s case against the pair received a boost in 2004 when the Hamburg lower court banned the offending track, but the Hamburg higher court subsequently ruled in Pelham and Haas’ favour two years later.

If the Supreme Court’s most recent judgement has any major implications, it’s this: according to the ruling, sampling is only justifiable if the producer can demonstrate they can’t create the sampled sound themselves. The case hinged on whether Pelham and Haas could have been reasonably expected to create their own approximation of the ‘Metall auf Metall’ loop from scratch. In order to prove that such techniques were technologically possible at the time of the track’s composition, expert witnesses gave live demonstrations using a 1996 Akai Sampler and bits of metal – and Pelham and Haas came off the worse.

The case opens up all sorts of cans of worms. There are clearly big practical problems to navigate: how does one go about realistically demonstrating that they can achieve a particular sound without recourse to sampling? Moreover, who judges whether an imitation of a sound is sufficiently convincing? As regards the latter quandry, the judge has suggested that the average listener would need to be unable to distinguish between recorded imitations and sampled material, which, as legal proofs go, sounds pretty vague. Pelham and Haas’ lawyer Udo Kornmeier suggests that the ruling might be used as a test case to outlaw sampling in any shape or form. He also warns that the ruling could extend beyond the world of electronic music, claiming that photo collage and written satire could theoretically be under threat.

Pelham and Haas are currently awaiting the full written judgement in the coming months. As The Stool Pigeon point out, there’s something faintly absurd about an act as central to hip-hop history as Kraftwerk pursing a case that might put the practice of sampling in jeopardy. The two tracks in question are below.