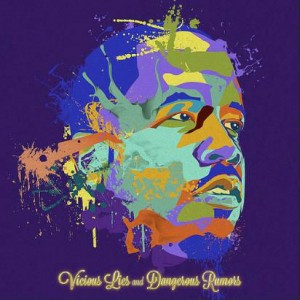 Much like Sir Luscious Left Foot, Antwan “Big Boi” Patton’s towering first solo album, Vicious Lies And Dangerous Rumors is glossy, overwhelmingly kinetic and neon-colourful. In fact, it’s arguably the pop hip-hop production job of the year, with each and every one of its innumerable hooks textured, accentuated and arranged in just such a way that they jump out at the listener like musical holograms. And like Luscious, Vicious is formatted like some kind of magazine show – a light entertainment tombola of 17 unconnected mini-features spanning a tonally erratic 60 minutes; each track a easily digestible, self-contained jellybean of a song, each with its own distinct flavour.

With a post-modern plasticity and fuck-all service paid to uniformity, Vicious Lies flits shallowly between light funkedelic, trap, r’n’b, guitar-pop, indie-electro and stoner jams – every track a potential single. It’s fickle and hollow. It’s junk food for the soul. And a more immediate, instantly addictive hip-hop album you will not find this side of My Beautiful Dark Twisted Fantasy.

Viscous Lies offers a looser sound than Lucious, while as a long-player experience it’s more relaxed, disparate and less ‘hip-hop’. It’s also a decidedly indie record: a genre / aesthetic that was a firm influence on Outkast but has been overly attributed to the Strokes-loving Andre Benjamin. It’s a certain type of indie – namely the perfumed electronica-de-indie that Kitsune aestheticized, the spirit of which has found a home with dubstep-influenced pop bands such as the promising Phantogram and in-demand collaborators Little Dragon. Recalling The Love Below‘s acoustic guitar songs, ‘Descending’ – one of several tracks here to feature Little Dragon – is bliss, but it’s the Phantogram collaborations that really impress. ‘Objectum Sexuality’ melds the New Yorkers’ dramatic sweep to an urban bump, while Sarah Barthel’s vocals are the perfect ribbon-y foil to Patton’s gloopy flow. ‘CPU’, meanwhile, is a boon – arguably the most chic, delicate and cool hip-hop track of the year. This is what happens when a rap producer looks to indie for ideas, as opposed to vice versa.

And the indie keeps on coming. ‘Higher Res’, featuring Jai Paul, is suitably stuttering and fractured. Anchored on picked electric guitar, the new wave ‘Apple Of My Eye’ is essentially a surf-pop track, reminiscent of both The Drums and, well, ‘Hey Ya!’. If ‘Thom Pettie”s early-electro production is sleazy, the presence of Little Dragon’s Yukimo Nagano makes it more about female sexuality than Tex Avery catcalling, and leftfield r’n’b cut ‘Raspberries’ is indie-cherubic as opposed to new jack lustful. It’s sweet, like a Frank Ocean track. Girls taste of raspberry, Patton told XXL.

So then: that big Outkast-shaped elephant in the room. How does Vicious Lies match up? Well, you could say that Patton’s doing the job of two men here, as both his and Benjamin’s style are present – and Patton certainly no longer seems the “normal”, more macho counterpart to Benjamin’s art-hop genius. The Big K.R.I.T-featuring ‘Gossip’ aside, his pussy ‘n’ Gucci moments actually enhance the afro-futurist strangeness and ghetto-fabulous androgyny that is Vicious Lies‘ production; the same qualities that crystallised the magic of Outkast and which again were – perhaps unfairly – widely considered to be Benjamin’s doing. With each new solo outing it’s becoming increasingly difficult to tell who was responsible.

It’s also difficult to name a more ‘feminine’ male hip-hop album released this year, ‘In the A’ and ‘She Said OK’ aside. It’s often the guest collaborators who provide balance: on ‘Shoes For Running’, Wavves’ Nathan Williams softens the male-grunting vibe with a child-like innocence, and on ‘Tremendous Damage’ Patton damn well sings, alongside dandyish soul vocalist Bosco. On ‘She Hates Me’,  a vulnerable Patton speaks thoughtfully on relationships. On the listener’s part, the compromise for this indie leavening is a reduction in the juddering heaviness and pugnacious verve that defined Luscious tracks like ‘Shutterbugg’ and ‘Back Up Plan’, but Vicious Lies is certainly the more adventurous album.

Listen to more than three tracks from this album in one sitting and it’s a bit like having both sides of Outkast’s Speakerboxx / The Love Below on shuffle. Not only that though, many tracks offer a subtle blend of both albums – the type of little alloys that might have come about had the two men actually recorded together on their split 2003 opus. You could even say that here Patton is bringing the Benjamin to Vicious Lies in lieu of 3000’s presence. It’s really working out for him.