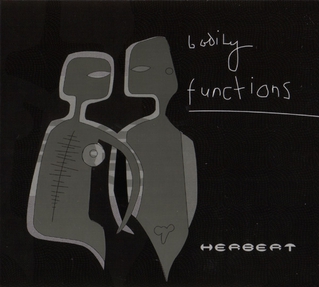 There’s nothing particularly timely about the reissue of Matthew Herbert’s Bodily Functions. Perhaps, his One trilogy having been brought to a close with 2011’s One Pig, it was only natural that the auteur-producer would enter a phase of retrospection (comprehensive box-set Herbert Complete is due shortly). But the sound of this record, tightly bound up in the stylistic concerns of the early 2000s, hasn’t exactly experienced a revival of fortunes in recent times. The synthesis of microhouse and melancholic chamber jazz is not some platonic ideal to which young producers now aspire. Quite the opposite in fact; on paper it sounds like a horrible idea.

It’s a testament to the strength of Herbert’s third record, then, that its reappearance is so welcome – and would have been welcome, one imagines, at almost any point in the 12 years since its release. Herbert has always been a slippery character, weaving between styles and disciplines in a manner that can prove frustrating to the inquisitive newcomer. But Bodily Functions sees the producer settle on something of a goldilocks zone, a place where the lush but finicky house sound of his first two LPs reaches a graceful compromise with the classicist jazz tendencies that will later give birth to The Matthew Herbert Big Band, all of it underpinned by the conceptually rigorous sampling approach that has since become his trademark.

In line with Herbert’s PCCOM, Bodily Functions is constructed largely from samples of an anatomical nature – the minute sounds of hair and organs – set against the mellifluous tones of a jazz ensemble. But that title works on a second level too: this is function music really, lounge music, urbane but unobtrusive, a sonic confection designed to soothe the nervous system, to still beating hearts. Still, in time-honoured tradition, this is Easy Listening with a tired soul, the diffident velveteen croon of Herbert’s then-partner Dani Siciliano conveying a rich undertow of sadness. On the gorgeous balladic ‘The Last Beat’, Siciliano asks of a lover, “Has the thought of leaving ever left you?”, and you get the sense that for Herbert it never has: themes of alienation and loss recur, recasting love as pernicious dependency (‘Addiction’), desire as the intractable product of absence (‘It’s Only’), and transforming even moments of playful self-awareness into paeans to postmodern dislocation (‘Foreign Bodies’). It’s a seductive mix, indebted to the heavy-lidded chillout sound of the early 2000s but effortlessly transcending it, inviting rumination without arrogantly demanding reverence.

Of course, even the greatest of albums might struggle to justify an hour-plus runtime, and Bodily Functions could have done with one more pass across the cutting room floor – lopping off ‘You Saw It All’ perhaps, marred as it is by a flimsy vocal turn from Phil Parnell, or ‘I Miss You’, its downcast half-step just a little too tentative to earn affection. But on the main Bodily Functions is a remarkably rounded, weighty record – a fact which shines a somewhat unfavourable light on the accompanying remix package, clocking in as it does at a gruelling 13 tracks. Matmos have fun with ‘The Audience’, shuffling the vocal to unearth new semi-meanings and throwing in a bizarrely bassline house-ish drop for good measure; DJ Koze turns in a pair of gratifyingly loose-limbed house mixes. Most of the rest range from pedestrian to poor (or just wholly unrelated to their source material – Jamie Lidell take a bow). A kind reviewer, though, would point out that these artists were handed a poisoned chalice. Bodily Functions has already said everything that needs saying. It is only right and good that a new generation should get to hear it.