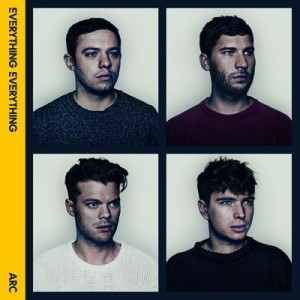 The indie contingent of mainstream British pop is already saturated with inoffensive, refined darlings. The ‘just lovely’ Vaccines, for example, or Alt-J: mummy’s special boys slumming it in ‘cuckoo’ folktronica. Another group of boy scouts is not exactly what we need right now. Fortunately, Manc four-piece Everything Everything are skilled, believably sure-hearted and canny enough to justify their existence. Although comparatively uninteresting next to the likeminded Wild Beasts, Everything Everything are, like many acts emerging from Manchester, intent on honouring the city’s heritage as a hub for envelope-pushing.

As every review of Arc is legally obliged to explain, the group’s math-y baroque pop is a bit Timbaland. Had, that is, the producer cut his teeth in ’80s Britain, on conservatory-standard prog. It’s this juxtaposition that provides the source of much of EE’s personality. There’s a tension here between the lusty flamboyance of black American pop and uptight Englishness; the Englishness captured in a pervading air of brainy red-brick eccentricity and emotional and sexual repression – evoked beautifully by the clean-cut mixing, politely crisp drums, fine-featured guitar and Higgs’ splayed vocals (complete with a touch of The Darkness’ Justin Hawkins). And aside from anything, the algebraic formalism of math-rock speaks innately of the cerebral. While the impression is of nervy men making nervy music, their end goal is always to really let go, using as their liberator the stop-thinking-and-just-dance genius of black pop. While certainly not the most sincere album around, nevertheless there is ingrained in its tireless activity a genuine passion to fight the loneliness of intelligence, of neurotic shyness – to fight an inability to connect with people, that condition exacerbated in the era of social media. The album makes frequent reference to a tabloid culture of reality shows and celebrity, now accelerated and ever more numbing.

Granted, the fussy-whiteboy-meets-black pop aesthetic is an Brit indie-pop cliché; it was last novel well before Hot Chip came along. Everything Everything, however, approach the idea with an endearing gusto and a sense of wonder for the pop field. And while lacking in the outsider edge of similarly themed bands from the post-punk/new pop era, their fruity / funky wares are contemporary sounding, as well as sufficiently exotic. And not for nothing, in today’s pop mainstream a coherent, complete album-spanning pop aesthetic is to be celebrated: Jessie Ware and Katy B’s debuts the only recent others of note from the UK.

Opener ‘Cough Cough’, with its pimp-snazzy synths and ricocheting snare drums, channels both The Neptunes and Amerie’s ‘1 Thing’; that the scratchy guitar funk is encased in the sound of rustic Britain makes no odds. ‘Torso Of The Week’ somehow melds the sultry efforts of 90’s Janet Jackson, indie-rock and r’n’b vocals, whereas ‘Radiant’ is what swingbeat would sound like had Teddy Riley really liked mid-period OMD. Elsewhere, ‘Armourland’ is carried on Timba’s signature staccato, staggered rhythm. The chorus however, channels a very British kind of glamour: all Duran Duran vainglory and cheesy wine-bar romance. To their credit, the group have an eerie knack for replicating an often overlooked aspect of Timbaland’s catalogue: the weirdness. ‘Cough Cough’ and ‘Kemosabe’ recall Timba’s work with Missy Elliot and Magoo, in the way that hooks are formed from random phonetics and apparently meaningless phrases.

But unlike Man Alive, Arc’s second half eschews r’n’b for straight indie tracks (‘Feet For Hands’ and the Coldplay-ish ‘Duet’) as well as a host of slowies which, if anxious and sad lyrically, are plain serene. There’s the Keane-with-synths piano ballad ‘The Peak’ and the choral ‘_Arc_’, and as the hook ratio reduces and the pop imperative withers, spiky smartness gives way to a dull quaint middle England dryness. If ‘Undrowned’ is effectually haunting for its weird monastic despair, and closer ‘Don’t Try’ a final hour return to vibrancy, unfortunately this end of the album recalls the wet bombast of The Maccabees.

It’s these tracks that make for a far less jittery album, as does the dialling back of Everything Everything’s math-y structural density to make way for uncluttered hooks and big choruses: generously repetitious ones which, crucially, hang around long enough to get into your head after only one listen. ‘Kemosabe”s unashamedly joyous chorus is primed on, of all things, a grand old key change. That, right there, is the hallmark of big brass ones, pop-wise.