The Roots have recorded an album with Elvis Costello 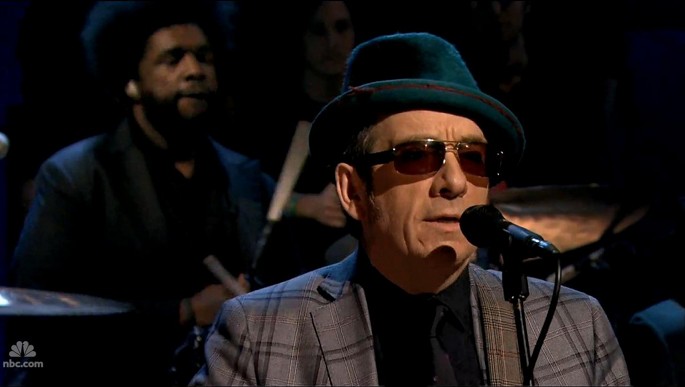 Philly guns-for-hire The Roots have apparently found a new paymaster.

The hip-hop outfit are still releasing records; their most recent album, Undun, dropped just over a year ago. These days, though, we see them more regularly in their role as Jimmy Fallon’s house band, duetting with the likes of Wu-Tang Clan, Jessie Ware and, on occasion, President Barack Obama. According to Exclaim, their next musical project will be another unlikely collaboration – a joint LP with speccy troubadour Elvis Costello.

Speaking to Billboard, drummer/bandleader ?uestlove revealed that Costello and The Roots had recorded “around 20 songs together”, and now have “the tightest 12-14 song collection”. Regular Roots associate Steven Mandell will mix and master the collection, although a label has yet to be confirmed for the release.

?uestlove said the union was “really love at first sight. The second time he came [on Fallon] surpassed the first one. So by the third time, he was like “Let’s stop messing around and do something together”.

The Roots will release a new band LP, titled & Then You Shoot Your Cousin, in late 2013 or early 2014. Footage of the artists rattling through ‘Black And White World’ on the show is below. ?uestlove recently dropped some clanging hints about the bill for the next edition of the annual Roots Picnic show.