It Stands to Conceal 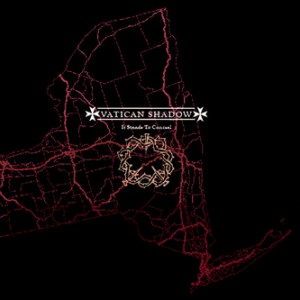 Working as Prurient, Dominick Fernow sought to embody tyranny itself, seeding his digi-metal in theories of noise as mind-control. Conversely, his Vatican Shadow project is, at heart, all to do with free will. A more objective and passive type of music, even at its most imposing Vatican Shadow functions to simply presents us with the facts. Specifically, the facts of a geo-political atrocity; dramatised here in the form of impressionistic soundscapes. How you respond, however, is up you. And that, right there, is what makes Vatican Shadow such a disquieting prospect.

Vatican is an instrumental project. So, unlike with Prurient, Fernow is no longer playing the apoplectically authoritarian frontman, something that right off the bat renders the sound less domineering: more discourse than diatribe. It’s a different mode for the New Yorker; while Prurient was totalitarian in its construction, Vatican Shadow leaves much more room for the individual. The question is, are we comfortable with that much freedom?

While neither sermonizing nor even morally determinate, Vatican Shadow remains an attempt to address, and ultimately condemn, the War On Terror. And in case there’s any doubt to the area of debate, taken from newspaper headlines are track titles like ‘Al-Qaeda Possess Nuclear Capacity’ and ‘Bin Laden’s Corpse’. Naturally, though, it’s all all about the sonics. Shadowed, paranoiac and surging insidiously on a type of conniving intent, this is the sound of ulterior government agendas, and like all good political music, instead of decrying horror Vatican Shadow makes you feel it. And what better way to transport us to that horror than by means of ambient electronica? This, however, is only half the story.

What the Vatican Shadow project is actually about, is the truth behind the truth. Namely evidence, concealed within the supra-national flow of news information, for a secret second war. The war of state murders and covert ops, fought beyond the hoodwinking rhetoric of a military-controlled press pool, beyond the jurisdiction of international law, and beyond the realms of moral accountability. And it’s Fernow’s approach to conveying his conspiracy theories that elevates Vatican Shadow.

Crouched, faceless, autonomic, unwavering, and implacable, these tracks are content to just lie in wait, without judgement, and simply bide their time. Until eventually, much like Laurent’s post-colonial guilt and that static street camera, your conscience succumbs to the drip-drip of Vatican Shadow’s unflinching gaze. At which point, all the horrors committed in your own name, by our military, penetrate right to your core. With a machine-like neutrality, the Vatican Shadow project is an attempt to simply just record – to pay witness to – all the worst transgressions of Western imperialism. This secret war. But, crucially, it’s also an attempt to invoke, though not by force, our own guilt for letting it happen. Rather than hectoring, Vatican Shadow takes the form of a question: ‘What are you going to do about it?’.

In fact, for all of Prurient’s terrorizing bombast, it’s Vatican Shadow that’s more excoriating of our apathy; merely by grinding you down with its remote but unrelenting presence. What at first smacks of cheap gimmickry and noise music’s adolescent obsession with horror, Vatican Shadow is arguably the closest music has come to accounting for the decade following 9/11, which, with increasing hindsight, seems now like one long bad dream.

Documenting a banner year for the Vatican Shadow project, this reissue pack combines three 2012 albums, the four-track Atta’s Apartment Slated For Demolition (Mohammed Atta piloted the first-impact plane on 9/11) the two-track / 40-minute-long Jordanian Descent, and the eight-track Ghosts Of Chechnya. The latter is based on Nora Strobert’s controversial theory that, after vanishing ghostlike from their homeland, ex-Chechen terrorists have, in collusion with the CIA, infiltrated Anti-Communist cells throughout the jihadist infrastructure with a view to eliminating Russian presence in the Middle East. Evoked, vividly, is the idea that these men – untraceable and invisible as if truly non existent – are ghosts in every sense.

You could describe Vatican Shadow’s sound as “hip”‘, in that it falls squarely between two currently hot trends: one one side the half-noise-half-dance aesthetic (Container, Pete Swanson et al) and on the other, the reverb-heavy techno that proved so popular in 2012. By the same measure, the Vatican Shadow project is very much its own sound; distinct from either mini-genre. Each song traverse the hair-line fracture between driven sound-scaping and something more track-like, but for the most part entries remain inert, stripped of sonic narrative and rhythmically obstinate, resembling aural art installations. Dancing is not a priority. ‘Peace Rage’ debilitates the foot-stamping end of Berlin with a noise-like percussive clatter, while ‘Chechnya Ghosts Loom Large In The Death Of Former Spy’ is one syncopation off four-to-the-floor. ‘Wahhabi Money Flows’ also frustrates, with its almost-swing, while ‘The House of The Followers’ is a dysfunctional approximation of trip-hop. To top it off, ‘The Hamburg Cell Was Born In Chechnya’ then deconstructs the dancier, EBM-influenced side of mid-’80s industrial. Perhaps Fernow’s one stipulation is that we don’t enjoy ourselves too much. And while these tracks borrow from other genres, in general the style of electronica remains wilfully nondescript.

As a rule of thumb, however, it’s Vatican Shadow’s deeper ambient tracks which are the more affecting: haunted and poison-slow bouts of quiet intensity; truer, you feel, to Fernow’s original intentions for the sound. Clandestine, taut and, in its pulse-like motion, suggestive of soldiers travelling on foot by night, ‘Jordanian Descent 2’ evokes the nerve-wracking lead-up to secret infiltrations. In other cases, this quality of mounting dread conveys impending violence on a more macro level. ‘Once This Fire Gathers Strength’ speaks of a region-wide tension, fast approaching critical mass. There is always the feeling that something terrible is about to happen, an ominousness peaking on ‘Snipers As A Breed Tend To Be Suspicious’, which depicts, if somewhat too literally, the sweat-meandering, breath-holding moment of execution; the theatre of long-range assassinations.

In relative terms, it’s a surprisingly subtle evocation of the Middle Eastern setting. In fact, were it not for the song titles it’d take far longer to twig the subject matter. While a lesser producer might have, say, sampled Al-Jazeera, here the FX and textures make only obtuse, indirect reference to the setting, while Middle Eastern rhythms are completely absent. It’s only on ‘Jordanian Descent (Sharian Law)’, with its vapourish religious chants and doubec drums, that the setting is made explicit. There’s a feeling this is the Middle East as seen through the eyes of the Western military complex; a hi tech game-zone where the tastes, sights and sound of indigenousness are abstracted by the impersonality of modern warfare: reality filtered through the night-vision numbness of Generation Kill.

Vatican Shadow fits neatly into the Modern Love aesthetic. Like Fernow, the label’s “knackered house” merchant Andy Stott and high hauntologists Demdike Stare are busy subverting electronica in quietly game-changing ways. But, if Demdike Stare concerns the ghosts of the past, Vatican Shadow’s is a real-time war. These are the ghosts we leave behind us today, and everyday, in what Chomsky called lands of wreck and ruin’. They are the ghosts of Western foreign policy, which, one day, will return to haunt us. Or indeed, have already. Just out of frame, on every track lurks the spectre of that fateful Tuesday morning. It may not seem like it at first, but truly this is music at its most provocative.