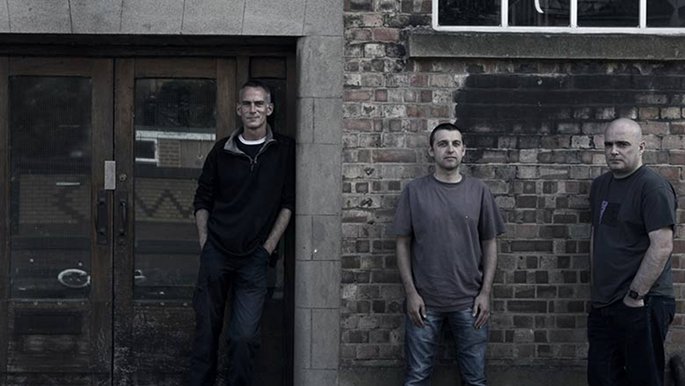 Sheffield’s self-proclaimed “awkward outsiders” have announced a new string of releases, including a new full-length LP.

One of Warp’s charmed first wave, The Black Dog have soldiered on in a number of permutations: a charmed trio, releasing early 1990s IDM classics Bytes and Spanners; group constant Ken Downie’s solo gig; and, for the best part of the last decade, a newly convened and highly prolific three-piece. Since the Liber… five-part EP/album suite in 2011, the group have been relatively quiet, although they had a hand in online channel Electronic Supper Club, described as a way to “reconnect with many things and each other.”

Tranklements will arrive on the band’s own Dust Recordings imprint, and will feature 11 different tracks (plus five insterstitial “bolts” to “disrupt the transitions between tracks”). According to the group, the album is a carefully curated set:

“Each [track] is its own little object, something we’ve created to externalise, explain and express the world we find ourselves in. It encompasses many thoughts, emotions and desires from the last eighteen months. There is an individual story and internal message behind each. They’ve all been discussed and fought for. However, we really don’t want to explain them, we don’t expect those personal rationals to translate to others. We’d rather you gazed upon the objects yourself and come to your own conclusions. Nobody likes to be told what to think.”

Tranklements will be prefaced by a 4 part 12″ series, titled Darkhaus. The releases – all of which feature exclusive material – will be spread across four different labels, with the first instalment arriving on Ostgut Ton sister label Unterton (recently home to Manhooker’s irresistibly cheery piano house cut ‘Wheels In Motion’). The disc will feature new track ‘Council Flat Emptiness’, plus a remix from Luke Slater, trading as L.B. Dub Corp. The second disc in the series will be announced soon, and will be arrive with a Regis remix.

Dust Science will release Tranklements on May 20. Unterton, meanwhile, will kick off the Darkhaus series on March 25.