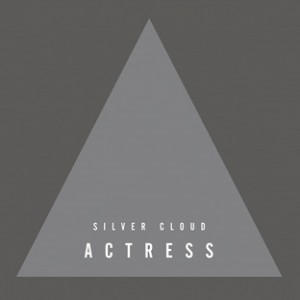 Itʼs interesting that for someone so in tune with its vagaries, Actress uses dance music not as a blueprint but something to deconstruct. Hazyville lay at a tangent to dubstep; though it vaguely resembled its source material, it was decidedly the product of an individual creative vision – in the dance world, but not of it. In the ensuing five years, Darren Cunningham has released two LPs that uncannily captured the changing state of dance music in a post-everything world. For 2010ʼs Splazsh, dubstep, all but dead, was no longer his point of reference. Instead, he channelled half-submerged memories of funk, r’n’b and garage into an album that was at once claustrophobic and sprawling. R.I.P. then saw Actress dive between the spaces techno and surface with a dance-not-dance record that was ambient and minimal and ill at ease.

That disquiet continues throughout new EP Silver Cloud, though Actress rejects R.I.P.ʼs minimalism in favour of a return to the murkiness of his first record. It evokes the kind of urban ambivalence specific to UK producers who engage with dance music without actually making it – Burial and Zomby are obvious parallels, but this has more in common with the hypermodernity of Jam City. Take the first track, ʻVoodoo Posse Chronic Illusionʼ, where a Plaid-esque harp melody percolates through a splintery digital mass of granular hiss, creating a lucent counterpoint to the synth crunch and syncopated, woodblocky percussion. Itʼs a tentative, queasy equilibrium. ʻVoodoo Posseʼ is an intricate slow burner that builds subtly, but this sluggishness is also its weakness, and it would benefit from being a third shorter. Simply too much time passes without enough activity to sustain interest for its duration.

At about half ʻVoodoo Posseʼʼs length, the tracks on the B-side pack more of a punch, even if their kick drums are either lodged in the deep crackles or hardly present at all. The grottiness and decay of ʻFloating in Ecstasyʼ are a far cry from R.I.P.ʼs denuded lustre. A hiss that sounds like gas expelled from a valve scatters the foreground, underlain by a vocal snippet that repeats the titleʼs refrain, its irony growing with every reiteration. This is only ecstatic in the way a comedown is technically ecstatic. Even if wonʼt make you move, ʻFloating in Ecstasyʼ harnesses technoʼs hypnotic pleasure, the brittle snares, and oily, rumbling bassline permeating the track with a latent menace. The background hum of ʻSilver Cloud Dreams Come Trueʼ adds to the overall unease, somewhere between overheated laptop and faulty kitchen appliance, as Tibetan singing-bowl chimes ring over tarnished, skittering percussion, and occasional pitchshifted wails slip out of the dense digital fog of the title.

Silver Cloud may be unfocused at times, but itʼs also a terrific feat of conflicting textures and moods, marrying crackly scuzziness and poetic timbres with ease. It doesnʼt look like Cunningham is running out of ideas, and if he fleshes them out fully for his next album, we may have another classic on our hands.