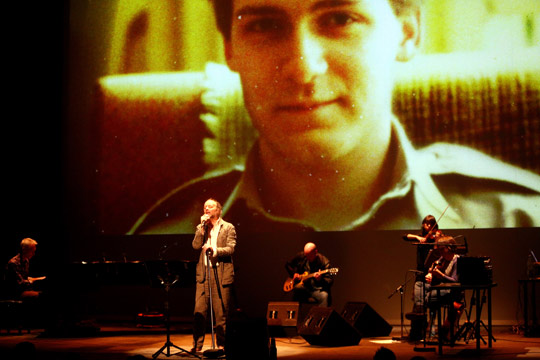 If the performances, showcases and exhibitions at CTM.13 Festival had one thing in common, it was a conscious rejection of aesthetic boundaries. As the organisers put it, “contrasts, dialogue, exchange, confrontation, and crossovers from the broadest imaginable range of approaches, genres, scenes, traditions, networks and subcultures”, and an endlessly questing spirit, gave the festival its aim – to challenge as well as entertain.

Using the problematic of the internetʼs impact on artistic production as a conceptual springboard, CTM certainly rose to its lofty goals. No series of gigs hastily cobbled together, this week-long event included a gallery of visual art, a series of live and DJ performances, a discourse programme delivered by the likes of Atom™ and Kode9, and even a Hacklab of musical experimentation. Even though the bulk of its programme clearly catered to a niche, CTM had enormous scope, its organisers taking care to ensure that it never fell into the rut of predictability, with a lineup that included Diamond Session, Florian Hecker, Demdike Stare, Forest Swords, dʼ Eon, Andy Stott, Powell, and perhaps more unexpected acts like Skream, Mykki Blanco and Pantha du Prince.

Seven performances in particular used a number of artistic modes to create something quite new. Rather than defining as binaries the intellectual and experiential, bodily and digital, historical and present, or aural and visual, they brought them together synergistically. It’s always a struggle to give verbal form to the live experience but then again, the failure of a medium to describe a phenomenon only reinforces the CTM aim: “to test itself and all else to the max.” 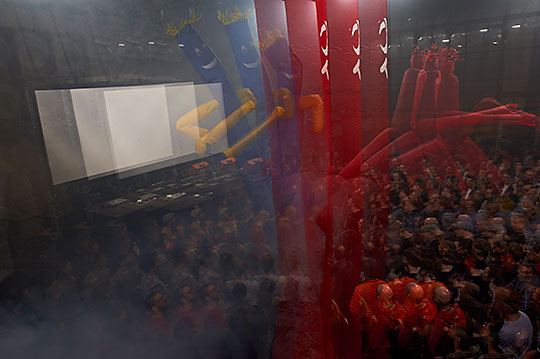 If youʼve seen Gaspar Noéʼs Enter the Void  youʼ ll remember a scene – if you can call it that – where the screen flashes at you for a good minute, accompanied by an unearthly ringing. You lose all perception of time, and when the film reverts to normal action you feel as if youʼ ve been hollowed out. Itʼ s about the only comparable experience to Mark Fellʼ s performance at Berghain, though of course this was about a thousand times more powerful. The relentless white flashes made it impossible to see any one thing for longer than a quarter of a second, so the surroundings took on a bizarre time-lapse quality. Eyes teared up while erratic kickdrums and synth stabs hit like a volley of punches. All sense of where bodies ended and surroundings began was lost, so people began to take on the qualities of the flashes, stabs and kicks, while three impossibly tall, cigarette-shaped inflatable puppets thrashed around above. Their limbs flailed spasmodically in an eerie dance.

Once the set ended with all the abruptness you’d expect, the widened eyes and trembling bodies that surrounded me spoke of the mass cultic transformation weʼd all undergone. Shaken and united in amazement, silence hung in the air until one whisper, and then another, pierced it: “Fuuuck…” 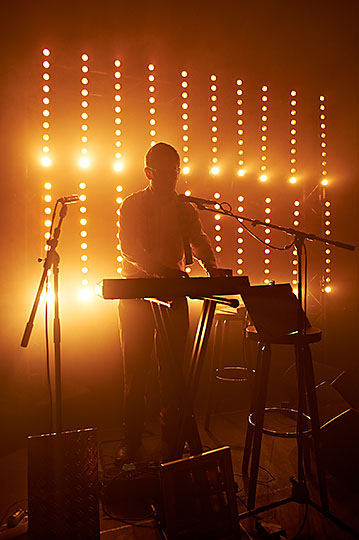 The PAN showcase at Berghain, a clear highlight of the festival, drew all kinds of responses: people stood still and open-mouthed in rapture, or jerked around crazily, or just listened to the endlessly captivating experiments in sound. But we had been in a club all evening, and the one thing that hadn’t happened, not really, was dancing. Near the end of his set, Lee Gamble dropped ʻDollis Hillʼ, and as the breakbeats and bass turned the crowd into a writhing mass before the track fizzled into a wash of noise, an impulse to carry on dancing infected us all.

Enter Heatsick and his Extended Play set: over two hours of luxuriantly deep, warm house. With a knackered Casio and not much else, Steve Warwick generated huge waves of empathogenic euphoria. He smacked his keyboard to create funky polyrhythms, looped his live vocals and shaker percussion, and sprayed perfume into the crowd. Were it not for how easy he made it look, and were we not all possessed by the groove, idiot grins plastered across our faces, we would have marveled at Warwickʼ s impeccable timing, stamina and precision. Iʼ ve heard Heatsickʼ s music described as “charming” and “playful”, as if artistic significance is somehow synonymous with bleakness, but bathed in collective ecstasy and the golden glow of pale twinkling lights, what I felt was the intoxicating power of dance music at its purest. 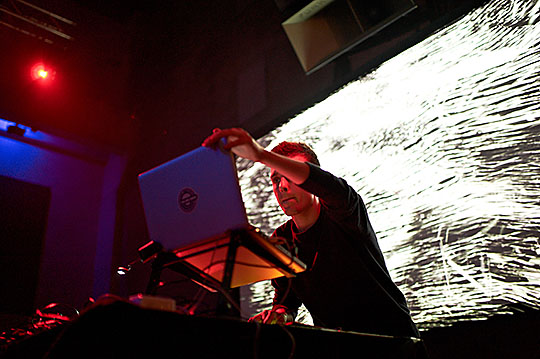 From Emptyset to Xiu Xiu, CTM certainly wasnʼt short on serious music. Clearly I had no problem with that, but there’s a reason why the academic year contains holidays. Thatʼs not to say Kuedoʼ s music is dumb –  far from it – yet he manages to pull off the elusive dual feat of intelligence and joy, an area where selfconsciously experimental musicians are apt to fall short.

Visually exquisite and aurally crystalline – thanks in no small part to the Berghainʼ s celestial soundsystem – Kuedoʼ s set was a revelation. For nearly two hours, the music that radiated onto the crowd was as vivid and enthralling as the projections from MFO. Geometric designs splintered into dazzling shards and then coalesced into a glittering whole, mirroring the polychromatic vividness of Kuedoʼ s musical fusion. With his combination of a dubstepper’s sub-love, hip-hop beats and esoteric synthwork, Jamie Teasdale produced not the greyscale sound the Berghain is famed for, but a riot of colour and movement. Proof, were it needed, that experimentalism and bliss can occupy the same space, and with stunning results. 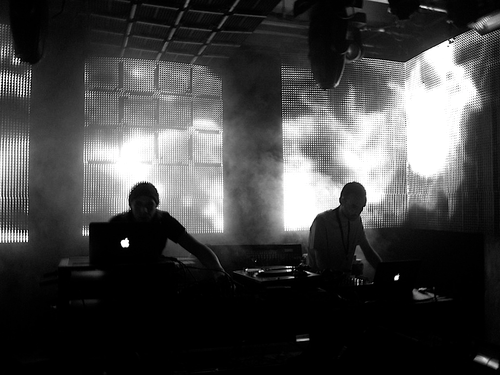 Modern Loveʼ s in-house occultists took to a seated auditorium for a one-off performance entitled In the Jodoverse and Beyond. Snatches of film drawn from the oeuvre of cult director Alejandro Jodorowsky and animations from Moebius were patchworked and looped into a surrealistic nonlinear montage that, coupled with Sean Canty and Miles Whittakerʼs live music, was deeply disorienting. One vignette was looped ad nauseam: before a lantern, a row of women dropped their robes again and again until the sexiness of their Man Ray backs degraded into something depressing. Eyes opened and rolled and closed in grotesque slow motion, each capillary loathsome. The scenes werenʼt without violence, either: a bodybag was zipped and unzipped repeatedly, revealing the naked woman within, and more naked women lay vulnerable and supine on beds that drifted through absurd pastoral settings. The music, like the visuals, flitted between micro and macro: claustrophobic blankets of noise or expansive breathy drones complemented close-ups of organs and the interactions of the cosmos. Equally reminiscent of Un Chien Andalou , DUNE  and grindhouse movies, In the Jodoverse and Beyond  wasnʼt so much a performance as it was a completely immersive, jarring experience. 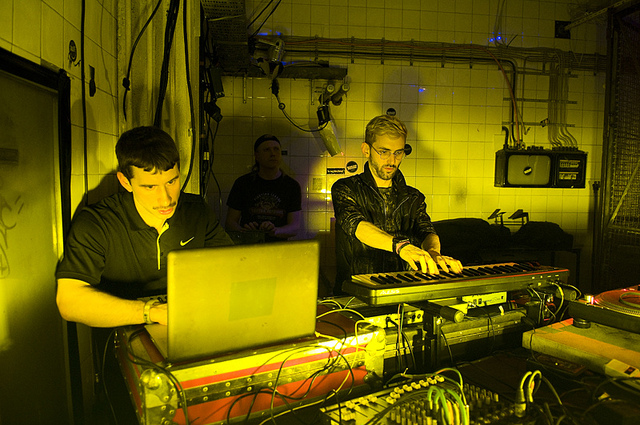 Gatekeeper couldnʼ t have been a better fit with the boundary-traversing conceptual ethos of CTM and its themes of digital stimulation and oversaturation. Their 2012 release Exo was as much a multimedia opus as it was an album – not limited to music but also including a typeface, visual art and video game. Performed live, Exo was a bizarre marriage of hypercoloured first-person shooter visuals and confrontational, corrosive music. Yellow and blue strobe lights shot through the theatre as the audience was taken on a seriously weird trip through dystopian military tropicalia – imagine Final Fantasy VII crossed with Avatar on tryptamines and youʼre halfway there. Still, however thrilling the visuals, acid EBM-techno is emphatically not music for theatres, and Exo was as incongruous in the Haus Der Kulteren Der Welt as a Wolves in the Throne Room gig in Luton Airport – the lesson being, I suppose, that some aesthetic boundaries, especially those relating to appropriate performance spaces, are best left unbroken. 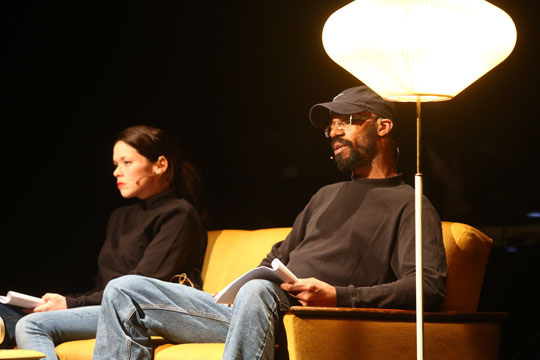 A man and woman sit on a couch at the front of the stage, arguing. Never quite physically realised, the repressed violence, reinforced by their static positions and near-total lack of eye contact, is palpably discomfiting. The set is sparse, a couch and stark light its only ornaments. Dean Blunt, all but hidden in the shadows, provides a harrowing soundtrack: rain and thunderstorms, the harsh truth of a slammed door, and the sweet relief of a prolonged electronic jam as tensions briefly abate. This is The Redeemer, Dean Bluntʼs forthcoming Hippos in Tanks album, and itʼ s not dissimilar to his previous releases on the label.

Where the samples ended and the original sounds began was a matter of dispute – someone less charitable might say annoyance – for listeners of The Narcissist, Dean Bluntʼs morally ambivalent drama of domestic violence. Yet even though Blunt wove samples into his live performance, here the distinction was hardly relevant. Instead, the tension between agonised repression and feverish outburst were at the fore, and the raw pain of failed relationships held up so that the experience of the two figures onstage was unnervingly close to our own. Blunt, somewhere in the penumbral stage left, played the role of musician-puppeteer, only performing when the two actors on their couch stopped talking and the stage was shrouded in darkness. Who was the perpetrator, and who the victim? Was it the music that dictated the narrative action, or the other way around? On record, Bluntʼ s world is lo-fi and crackly, mirroring the ongoing distraction and loneliness of modern life. The Redeemer as a play performance, however, dragged hurtful relationships out of the conceptual realm and into cold inescapable reality, a cruel reminder of how we unwillingly enact destructive roles on life’s depressing stage. 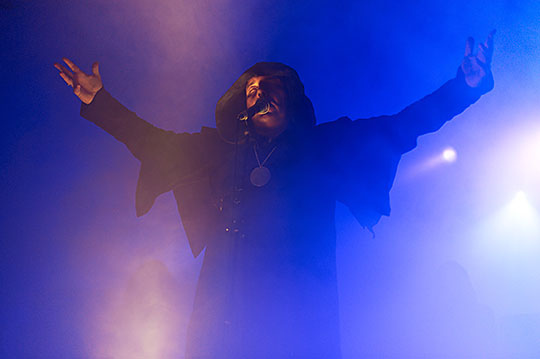 As with all the aforementioned performances, the Sunn O))) concert extended beyond the parameters of music. But this wasnʼ t audiovisual; it was architectural. An opaque smoke filled the venue, obscuring even the closest objects. It acted like a cocoon, so that even though people surrounded me I was quite alone with the consuming drones that seemed to penetrate into the very centre of my body. The hooded, cloaked figures onstage moved with glacial slowness, towering above in the gloam like stone monoliths from another age. One drone, sustained into infinity, had the volume and power to turn internal organs into soup. I swear I felt my neocortex melt.

The higher the volumes and lower the frequencies, the more intense that wonderful sensation of bodily submission to music. At times it felt like the sensory overload was so massive that my perceptual abilities were being transcended. After the last drone had pulsated through my being and silence filled the space previously occupied by those immense volumes, I realised I had barely breathed the whole time. The snow came down outside and people trickled out of Astra, breathless and elated and all but oblivious to the cold.