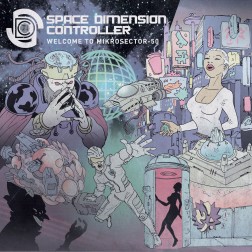 Hats off to the Academy for another cheerless Oscars ceremony – a dismal pageant of on-stage tumbles, tottering clothes horses, depressing calls and, courtesy of Seth MacFarlane, off-colour flubs. Still, despite a thousand reasons to despair with Hollywood, it’s not hard to find musicians infatuated with the silver screen. Umberto, for one, has been putting out “soundtracks to films that don’t exist” for yonks. Spencer Hickman’s wonderful Death Waltz Recording Company label, meanwhile, has spent 2012 churning out soundtracks to films that do exist, reissuing classic OSTs on blood-splattered vinyl. Symmetry’s canned Drive score, DROKK’s Judge Dredd fan-fiction, that “Short Film By Kendrick Lamar” – more and more people are composing (and, by extension, listening) like cinephiles.

Few are quite as smitten with the idea of album-as-movie as Belfast producer Jack Hamill, aka Space Dimension Controller. For sure, Hamill’s sound – an unapologetically retro blend of analogue techno and gooey-eyed boogiefunk – has always been distinctive. It’s his way with a concept, though, that’s really made him stand out. Since 2009’s Unidentified Flying Oscillator, Hamill’s entire canon has obsessively documented the plight of time-traveller/funk cadet Mr 8040, marooned on present day Earth and determined to return home to Tiraquon6. Across 12″s for R&S and Boxcutter’s Kinnego label, he’s fleshed out his own private cosmology, inspired in equal parts by AFX, Jonzun Crew and Save The Cat!. This sort of sci-fi daydreaming is hardly new – see Jeff Mills’ ‘The Sleeper Wakes’ trilogy or, more obviously, Drexciya’s subaquatic schematics – but Hamill’s just about the only member of the New Breed spinning stories with such abandon.

New album Welcome To Mikrosector-50 differs from those records listed above in that it doesn’t imagine, approximate or pay tribute to a particular film. By contrast, it is a film – a sprawling narrative piece with credit sequences, internally consistent mythology, a roster of regular characters and lots of dialogue. The last point can’t be emphasised enough: I’m still not fully decided whether Welcome To Mikrosector-50 is an album with talky bits or an audiobook with tunes. Thankfully, the story’s a riot. Mr. 8040 finally makes the return journey to his home on Mikrosector-50, only to rock up five years too late. Cue a furious search for a lost love, a terse showdown with former boss Max Tiroquan, a druggy bender on pirate colony EroDru-10, and, in the end, a realisation that Earth wasn’t so square after all. To put Hamill’s ambition into perspective, Locked Groove’s most recent EP proudly promised to “join the musical dots between classic House and Techno.” For chutzpah alone, Welcome To Mikrosector-50 stands out a kiloparsec.

The swing towards storytelling marks Welcome To Mikrosector-50 out from its predecessors. In contrast to previous releases, the emphasis is on extended grooves and scene-setters. The bulk of the tracks here operate like chapter headings, signposting mood rather than demanding attention in their own right. ‘Confusion On The Armament Moon’ is a twinkling Todd Terje jam that chugs along along for 8 minutes.  Italo disco cuts ‘You Can’t Have My Love’ and ‘A Lonely Flight To EroDru-10’ stick fast to their grooves and faster to their guns. For the most part, it’s a shift that works. If the album lacks the immediacy of Unidentified Flying Oscillator and the diversity of The Pathway To Tiraquon6, it benefits from some canny pacing and a relentless sense of enthusiasm. The dialogue interludes – less skits than FMV cut-scenes – will definitely try the patience of some, but Welcome To Mikrosector-50 is a slow-burner that amply rewards those happy to deactivate their disbelief chip.

Conceptual heavy-lifting aside, there’s simply a lot of winning material to enjoy here. ‘2357’, recycled from The Pathway To Tiroquan6, is a mellow counterpart to Jam City’s phenomenal ‘Backseat Becomes A Zone While We Glide’. ‘Mr. 8040’s Introduction’, meanwhile, is a joyful ‘The Message’ pastiche, complete with dopey rap, ersatz scratching and Oberheim DMX patches. Hyperspeed techno jam ‘Rising’, easily the fastest and most forthright thing here, soundtracks Mr. 8040 coming up and freaking out – Extraterrestrial Traffic, if you like. Best of all is wiggly break-up jam ‘When Your Love Feels Like It’s Fading’ which, despite all the lunacy, tugs real heartstrings.  There are, admittedly, low-points (see the interminable man-on-alien sex jam ‘Quadraskank Interlude’) and over-familiar friends (standout track ‘The Love Quadrant’ first saw release almost four years ago). Ultimately, though, Welcome To Mikrosector-50 is possessed with a sense of character that is as exhilarating as it is rare.

In interviews, Hamill has talked about wanting to tour Welcome To Mikrosector-50 with full set, sci-fi costume and audience members playing the central characters. It sounds absurd, it sounds farcical, it sounds absolutely awesome. That’s as good a way as any to sum up Welcome To Mikrosector-50 – a record with its head in the stars and its tongue in its cheek. In terms of sheer daftness, it makes Glass Swords look like a Richard Skelton record; to be cynical about it is a severe failure of spirit. Opt into the story, and Welcome To Mikrosector-50 is that rare thing – an electronic full-length that demands to be consumed as album, and reveals more with each return visit.