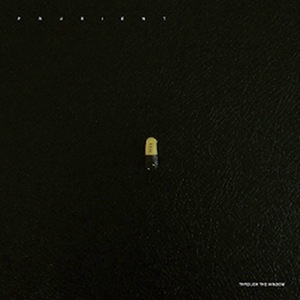 Bleak and bleakest meet for Prurient’s first release on Kiran Sande’s deadly serious but reliably excellent label. Even though it was recorded at the same time as 2011’s stellar Bermuda Drain, Through the Window is being released separately – quite right, as it’s a different animal altogether. The earlier album saw Dominick Fernow take the Prurient project pop, as it were, with foregrounded vocals and occasional concessions to prettiness amid plenty of nightmarish screaming noise. Here, he applies his depraved touch to 4/4 club music. Rather than embrace the grotty, decayed sound typical of, say, Mika Vainio or Pete Swanson, Fernow takes a more sprawling, less finely textured approach, so that Through the Window strikes a fine balance between morbid gloom and its faintly cheesy reference points.

Compared to great extreme records from the Prurient vault like The History of Aids and Arrowhead, it’s pretty tame, but the predatory menace Prurient fans love him for still skulks beneath the surface. The first track of this blackened, feral take on club music, ‘Through the Window’, takes up the whole A side, Fernow stretching the prolonged builds of techno and trance until they’re no longer euphoric but fraught with fear. It’s a torturously slow burner – the first kick drum doesn’t appear until over three minutes in – but its fat throb, Fernow’s creepy rasp and the ugly soup of noise at its centre sustain your interest for eighteen minutes, which is no mean feat.

Taken on its own merits, ‘Terracotta Spine’  – three minutes of paranoid, harrowing noise – is a superb track, but sandwiched between two long ones here it feels more like an interlude. Fernow’s vocals lurk in the background shadily, taking a backseat to the blistering squall of harsh noise. Still, ‘Terracotta Spine’’s black hues pale next to the mammoth ‘You Show Great Spirit’.  What with the oppressive 4/4 chug and the relentless, swollen synth phrases, the third and final track boasts all the macho sheen and fatness of big-room techno – albeit big-room techno peppered with metallic crashes and smashing sounds. The beat dissolves into a portentous amelodic rumble, and those sounds of destruction close the record.

Whether operating as Prurient or Vatican Shadow, Fernow’s raw unearthly aggression has always been his main draw, and it’s hard to shake a slight sense of disappointment at Fernow’ restraint on Through The Window. It’s also a short album, and, as a result, never reaches the heights of either Bermuda Drain or the first Blackest Ever Black LP, Raime’s (admittedly near-perfect) Quarter Turns Over a Living Line. Still, there’ll always be room for expertly produced, noisy techno, and Through the Window is an example of the sound done to perfection – caustic, haunting and, despite everyone’s best intentions, almost fun.