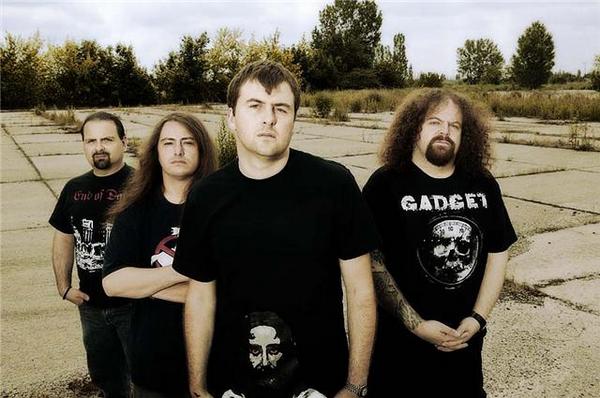 The V&A are currently reeling in the plaudits for their mega-successful David Bowie Is… exhibition, but it seems their ardor for rock music only stretches so far.

A free show from grindcore founding fathers Napalm Death was slated to take place this Friday at the historic London museum. The show was promoted as a collaboration with Keith Harrison, the V&A’s ceramic artist in residence, and was billed as a comment on poverty in the band’s Birmingham hometown. Intriguingly, Napalm Death were scheduled to play through a bespoke clay PA system, which would eventually blow up during the performance.

V&A bigwigs, however, have now pulled the plug on the show. According to a statement, museum officials are concerned that the vibrations from the show might damage the building and its other exhibits:

“It is with regret that we have taken the decision to cancel the one-off Napalm Death performance. This was due to take place in the Europe Galleries which are currently being refurbished and a further safety inspection has revealed concerns that the high level of decibels generated by the concert would damage the historic fabric of the building.”

Singer/bellower Barney Greenway apparently saw the move coming, suggesting the band’s “crippling sound” might not be best suited for the venue:

“[The V&A] had been making noises. They started asking the sound guy fairly nervously: ‘What will the volume be like?’ He was like, ‘What can I tell you? They make a lot of noise. He didn’t know what would happen to the plates. Apparently there was some suspended china thing around the stage. Obviously if we cranked [the music] out and it detached from the ceiling, that would be embarrassing.”