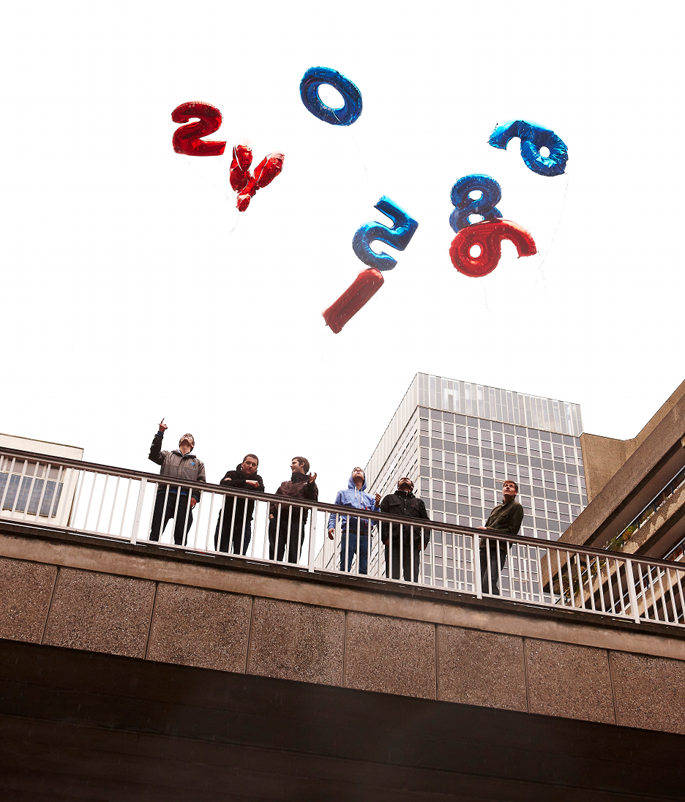 Glasgow record label and clubnight Numbers turns 10 this year, and will be celebrating in style.

As well as a series of releases from names both familiar (Deadboy, Rustie) and unfamiliar (newcomer SOPHIE joins the stable, while the often overlooked Redinho has his debut album on the way), the six-man team behind Numbers have launched a festival, Pleasure Principle. A collaboration with festival veterans Dedbeat, Pleasure Principle takes place from April 26-28 in Cornwall, and will feature performances from the likes of Levon Vincent, Ben UFO, Ruff Sqwad and TNGHT. FACT caught up with Numbers’ Jackmaster and Spencer to find out a little more about the thought process behind Pleasure Principle, and what else the team have planned for the year ahead. Also: enjoy exclusive streams of two tracks from Deadboy’s forthcoming .

Numbers was obviously a clubnight for 10 years, but a festival is a far bigger undertaking. How easy or difficult a call was deciding to do one, and has it – so far – been as easy or hard as you expected?

Spencer: “It feels pretty natural to us. We have always been chatting about doing a festival since the start, but more seriously over the past few years. We just weren’t sure about the format or exactly how it was going to happen.

“Parts of it have involved a bit of a learning curve as you would expect. The main thing I love is the new stuff – we actively try to steer away from repetition, so it’s all progress once you zoom out.”

Tell us about the relationship between Numbers and Dedbeat.

S: “Jack and I were running a club before we started Numbers in 2002 and we saw Dedbeat’s old festivals and immediately wanted to go… Neil my brother, who runs Numbers too, was a couple years older and his friends were into the lineup so we all planned a trip down.

“Now it was a bit tricky because Jack was 16, I was 17… so we had to nervously call up Dedbeat HQ to check we were OK to get in… which led us to Sam Reid, who ran the festival with another top guy Mat Carter. Sam, who nowadays runs Pleasure Principle with us, asked Jack who we wanted to see, probably thinking he would catch us out, but Jack replied with most of the lineup – lots of Rephlex stuff, Aphex, Luke Vibert, Souls Of Mischief, Doug E Fresh, Andrew Weatherall, so there was a bit of immediate respect from us there.

“We went for a couple years to Dedbeat, and also most of us went to a festival they ran in Rome called Bitz so we became pretty familiar over the early ’00s. Fast forward like 11 years and we’ve all become really good friends.

“Sam gave up doing Dedbeat in 2004 which I always said was a shame as it was a massive and very influential thing for us growing up. He was always encouraging us to do something as Numbers, but we were concentrating on the label, our other jobs, DJing etc.

“Goodhand and Nelson from Numbers were working closely with Sam from Dedbeat on design projects – Goodhand does all our design as Studio Remote, and runs Numbers – and eventually Sam raised an option on this place in Cornwall. We were ready for something like this – it just seems really natural for us to all do it together.

Dedbeat aside, are there any festivals you’re taking particular inspiration from with Pleasure Principle?

S: “Well it’s a caravan park festival – so for us in Numbers the first ones we went to were the Dedbeat festivals in Great Yarmouth (2001-2004), then a totally amazing ATP in 2003 curated by Autechre that most of us went to.

“I guess if you really think about it, the Dedbeat and ATP Weekender festivals helped us start Numbers – they had the electronic stuff down, bits of classic hip-hop, disco, funk etc… it wasn’t all ‘new’ to us – but it was great to have it presented together within thought through lineups by people who know. If we didn’t go the whole thing might not have happened, or would be different.

“In terms of other references… it’s impossible for me to speak for everyone, as part of the way we work is so collaborative, there’s six people in Numbers, and more in Dedbeat. For me personally I’ve been at Sonar in Barcelona for the last nine years as have most of us, it’s a good place to be in June and we’ve been doing parties in and around the festival for years too. Early memories of T In The Park are a bit rose-tinted, but there was definitely something about turning up there seeing A Tribe Called Quest, Beastie Boys, The Prodigy and loads of techno and house in the Slam Tent when I was about 13. Sadly I was told I was too young to go at 12, so I missed out on Daft Punk live during Homework era. Still not forgiven you, mum.

“Following the ATP’s and Dedbeat, there was the pre-London Bloc events that started in the same venue as Dedbeat when it stopped – with a really similar lineup to Dedbeat. They grew up not far away from where Sam held the events and I got to know the Bloc guys from the Dedbeat’s as we were the same age and our crews used to go along. We played the Bloc festivals too and even the London Stubnitz boat, before the chaos last year.

“I know we, and I think many others, were still looking for a caravan park thing when they moved to London in 2012. The caravan weekender is unique to the UK as things like Northern Soul Weekenders, Southport, ATP, Dedbeat have been using battered caravan parks for decades. With Pleasure Principle we want to continue that tradition in our own new way.” 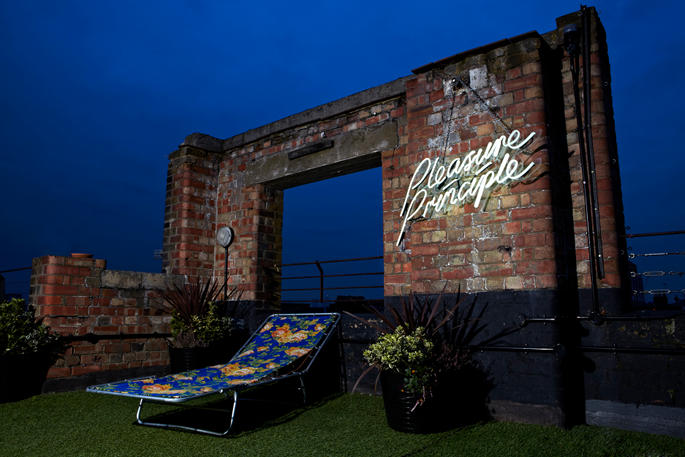 “Things like Northern Soul Weekenders, Southport, ATP, Dedbeat have been using battered caravan parks for decades. With Pleasure Principle we want to continue that tradition in our own new way.”

After releasing a lot of music from a lot of different artists, Numbers seems to have settled into a label with a close-knit family of artists, with Deadboy, Redinho, Lory D, etc. Tell us about what’s in store from the label this year, and are you currently working closer, or more back-and-forth with artists when it comes to releases?

Jackmaster: “It’s great to have artists that are kinda “faithful” to us if you will, but we value any one release as much as the next. I think some of our strongest moments have just been one off EPs. Like Mosca’s or Jamie [xx]’s but then there are EPs like Slackk’s that are possibly more overlooked but I love just as much. Something that was particularly special for us was the new Rustie release that we put out this week, because his success has been so integral to the simultaneous success of Numbers and he’s been with us since the start.

“We’ve always been quite hands-on with the A&R. It’s very rarely that are we sent something that we think is 100% ready to go and doesn’t involve a few feedback-based email exchanges with the artist, so that remains the same.

“There’s some more Deadboy material in the pipeline, including a release of some of YouTube classics that were lost when his house was robbed a few years ago. That one is reliant on us being able to get the tracks up to a standard good enough to release, as they only exist as demos really. There’s a mini LP from Kool Clap from Paris, some fresh stuff from SOPHIE, and we’re re-releasing a classic track from one of the old labels with some pretty exciting remixes. One of which is 30 minutes long – hint hint! Plus there are always a bunch of other tracks floating around in our Serato crates waiting for B-sides or remixes to be finished so they can be released in a complete package.”

How’s the Redinho album sounding? And why was he the choice for the first Numbers album?

S: “We’re really proud of it, it’s been in the pipeline for three years – I must have at least 20 versions of each track on my computer and an EP or two of unused stuff that is great but didn’t quite fit. Looking forward to people hearing it. It sounds like a proper album listen: melodic, quite poppy in parts, 80s funk/talkbox in bits, atmospheric electronic in others – a range of styles suited to open ears.

“He’s a talented guy and – trying not to sound too cliched here – his thing is just ‘music’ not scenes. To me it’s not just ‘dance music’ – he writes songs then produces them. He’s been working his arse off and has a solid live show that’s ever improving too – I hope people will begin to take notice of him this year as I feel he really deserves it – we’ve said it before that’s he’s a bit of a secret weapon and I think this will prove it. We’ve had some unprompted mails from people I trust like Mark Bell, Hudson Mohawke, Mark Ronson, Artwork… musicians and producers seem to be really clicking on to him, that’s a big thing to get right as these people have good ears. It will be out in June / July – exact date TBC, once everything is in it’s right place.”

Anything else you have in the pipeline for your 10th year?

J: “As well as the aforementioned releases, plans for some sick 10th anniversary parties in Glasgow and London are already underway, plus a load of festivals such as Roskilde, Hideout, Bestival, Outlook, Eastern Electrics and more.”