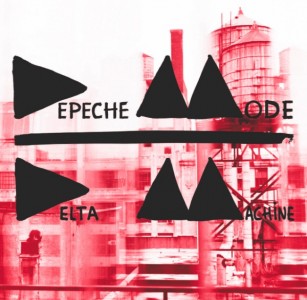 Given the tendency of major labels to soften music into radio-friendly mush, the first second of Delta Machine comes as something of a surprise. ‘Welcome to My World’ opens with grim synth rumble and a merciless kick drum that wouldn’t sound out of place on a Diamond Version record, not letting up the whole way through. It’s a stark contrast to Dave Gahan’s silky intonation, “Leave your tranquilisers at home / You don’t need them any more”.  The drugs-sex-Satan lyrical themes are hardly unfamiliar, but in this newly heavy context, they don’t sound tired. ‘Angel’ is even better than ‘Welcome to My World’, its portentous bassline and mangled guitars matched perfectly by Gahan’s gothic snarl.

Depeche Mode have always balanced bleakness with shimmer, though, and ‘Soft Touch / Raw Nerve’ drips with the kind of sleaziness they do so well. Those synth stabs are the stuff of pure fetish, and Gahan’s voice doesn’t sing so much as slither around the question, “Have I got a soft touch? Have I hit a raw nerve?” A similarly prurient vibe is in full effect on ‘Slow’. Gahan, ever subtle, spells out “I don’t need a race in my bed” over Martin Gore’s slippery, bluesy electric guitar licks. In spite of its huge campness, the fat snares, oil-slick vocal and what sounds like a timestretched swarm of bees keep ‘Slow’ on just the right side of unintentionally hilarious.

‘Soothe My Soul’, meanwhile, is a wickedly fun uptempo track that feels like the apotheosis of Depeche Mode’s marriage of gritty noir and coruscating pop with seedy lyrics like “I’m coming for you / I need to feel your skin”. With a triumphant chorus, brash synths and vigorous beats, ‘Soothe My Soul’ is among the best things the band has ever done, almost the equal of ‘Enjoy the Silence’ or ‘Personal Jesus’. For all the fun, though, nobody does gothic melodrama quite like Depeche Mode, and ‘Alone’ is one of the best tracks on Delta Machine, all ominous rumble, churning drums, gritty synths and seasick strings. ‘The Child Inside’ is also brilliantly sinister, seething with barely contained tension, and desolate to the core.

It mostly hits, but when Delta Machine misses, it does so spectacularly. ‘Heaven’ starts promisingly enough but then degrades into a piece of stadium wank-rock that’s cheesy and bland, with a towering chorus and pointlessly spiralling instrumental section. As the album’s first single, it reeks of major-label machinations. ‘Should Be Higher’ is also all bombast and little real feeling. By contrast, ‘My Little Universe’ is mostly insipid fluff, even if the intense sonic pileup in the final thirty seconds compensates for the four minutes of preceding Caribou-lite electronics. Fortunately, the album ends on a high with the heady, leathered, bluesy ‘Goodbye’. It’s rare indeed for a band to sound this good on their thirteenth studio album; rarer still for them to remain interesting or relevant, and yet with Delta Machine Depeche Mode achieve both. It’s not a huge stride in a new direction, but its incorporation of new sounds into the established blueprint sounds like a band both mature and renewed.