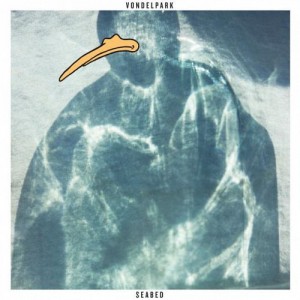 The three members of Vondelpark, a band signed to R&S (label motto: “In Order To Dance”), aren’t fans of dance music. In interview they point out the contrast between house music and their own, which they call “real” – asserting by implication the unreality of a musical genre which spans continents and decades. It’s something I’d be altogether happy to ignore – they’re young, and hardly the only ones out there who need media training – if their debut album contained just one decent hook. I’ve listened to it a number of times now. It doesn’t. Instead, Seabed is an insipid exercise in affected profundity spread over ten excruciating tracks, all marshmallow puff, inept instrumentation and infuriatingly wispy vocals. Frontman Lewis Rainsbury says, “It’s supposed to be the ultimate bedroom listen… [about] feelings to do with being young and in love”, but, having been both both young and in love, I can attest that Seabed feels like neither of those things. It is a bedroom listen, though. Remember when dubstep fell into the hands of kids who stayed in their bedrooms instead of going to raves, so that after Boxcutter came Bondax? Vondelpark’s members do something similar to R&B and pop, appropriating the genres into their own sexless, bland, hazy blueprint.

“I love you more than…” the opening track ‘Quest’ begins, but the remainder of the line is lost in vapour, dissipating into unimportance. The vocals are full of vibrato but empty of meaning, both here and in the second track ‘Blue Again’, where they’re also pointlessly filtered. The guitar chord progression wouldn’t be out of place on an Efterklang record and is quite lovely, but ‘Blue Again’ is mostly etiolated arps and wan strings, the whole thing so flimsy it’s forgotten before it’s even over. ‘Dracula’, meanwhile, feels like a trodden-on remnant from the James Blake cutting floor, its title accurately, if unintentionally, referring to its own bloodlessness. This is the fourth song, by the way, and I still haven’t come across a decent hook. ‘Come On’, with its fatuous refrain (“Come on, come on”) brings in pitchshifted vocals because, let’s face it, the cliché wouldn’t be complete without them. This is the kind of track the xx would reject for being too vanilla. Next up, the tautological ‘Always Forever’, whose autotuned harmonies are truly the stuff of nightmares. This is alt-R’n’B of the very worst strain imaginable. “Darlin’, darlin’, won’t you let me”, the main Vondelparker sings, his lines completely devoid of emotional import.

Despite ‘Californication Analog Dream’ containing both an allusion to my least favourite band and a harmonica, it’s the best thing on Seabed: the guitar line is pretty if predictable, the vocals partly intelligible, and the drums inoffensive. Still, six minutes are three too many and it’s pretty hookless. ‘Closer’, easily the album’s worst track is misleadingly named, as in fact it’s the fourth track from the end. Imagine How To Dress Well diluted to the point of transparency, with pitchshifted vocals tacked on along with even more inane reverb. ‘Bananas (On My Biceps)’ follows a similar formula with a slightly raised tempo.

The album has one mood throughout, a sort of vague, lackadaisical pensiveness. You’d think music located at point at which pop, R&B, indie and the cloud bit of cloud rap meet would sound zeitgeisty and hypermodern; instead, Seabed is the worst of all worlds, all fluff without substance and repetition without meaning. It also strikes me as strange that a label capable of recognising and supporting the talents of unique, idiosyncratic artists like Untold, Space Dimension Controller and Blawan would release such a coffee-table record. In the text accompanying the album, Rainsbury says that during the recording process, the band often went days without seeing other people: “we didn’t feel like we existed in the real world, it felt like we were hiding in a seabed”. Vondelpark obviously have potential, and I’d like to see them realise it, so here are my two cents. Go outside. Maybe even dance a little. It’ll do you the world of good.