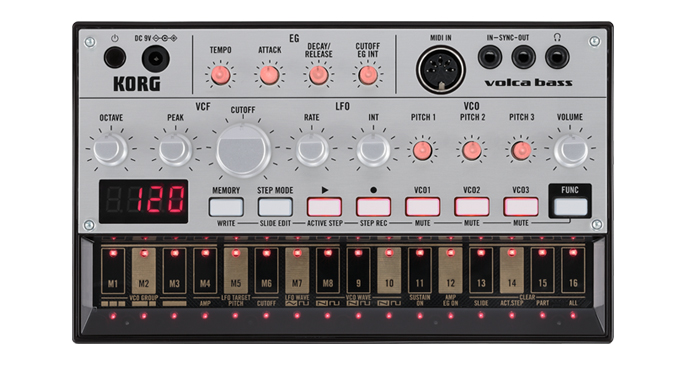 Korg are on a roll at the moment, and are set to release three brand new analogue synthesizers this summer.

Each synthesizer is part of the company’s new Volca line, and as you can probably see from the picture above, the look is eerily familiar. With one bass synth, one lead synth and one drum machine, the market Korg is aiming at is clearly the crowds of young tech savvy producers eager to own an original TB-303, TR-909 or TR-808, but are shut out thanks to high prices and low availability (thanks for that eBay). Korg have made a surprising re-entry into the analogue market in the last couple of years, with their innovative Monotron setting the stage for these new grooveboxes, and their imminent MS20 redux nudging into the more professional market, so it’s hardly surprising that they have realized the giant gap in the market. Considering how much these sounds are fetishized in contemporary dance and rap music, we can’t understand for the life of us why Roland haven’t considered doing a similar line.

Due for release some time in July, each box comes with its own mini sequencer to allow for quick on-the-fly sound creation, and can also be controlled via midi. The bass and lead modules come equipped with a swish replica of the 1970 MiniKORG filter to aid in sound creation, and while they might look a little similar to the TB-303, it’s this filter that should make sure they stand out from the crowd. Promising to contain “real analog sounds created with reference to classic rhythm machines”, it would be safe to guess that the drum module will have some pretty usable 808 and 909 sounds in its arsenal, and from the sounds of the demo below, that guess is right on the money.

Each module is set to retail at a modest $149.99, so there should be very little stopping producers from rolling the dice on real analogue gear once again, and in our eyes that’s a very good thing indeed. Your move, Roland. [via XLR8R]