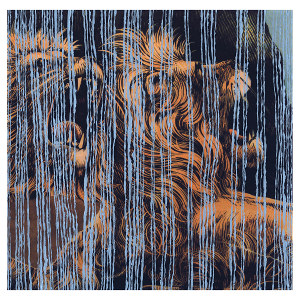 As a Ph.D student in anthropology and ethnomusicology at University of Wisconsin-Madison, and a high school friend, neighbour and band-mate of members of Real Estate, Titus Andronicus and Family Portrait, Julian Lynch’s style of folk is informed in part by his teenage associations with the New Jersey indie scene and in part by his studies, which recently took him to India on a research trip to study the political and social relationships involved in local religious music festivals. Needless to say, Lynch draws on a myriad of influences on his latest LP Lines, which is a rambling trip through ’70s psych-rock and experimental folk that is both soothing and disorientating in its evocative balancing act of multi-instrumentation.

As the follow up to 2011’s acclaimed Terra, Lines feels somewhat ironically named. Its sense of linearity is at times murky, and there’s precious little narrative – Lynch’s vocals and lyrics are almost completely indecipherable for the most part – but what does translate well is Lynch’s ability to craft an album with a limited yet richly utilised range of instrumentation that feels less dense than his previous work. It lingers along a fairly restrained and levelled timbre throughout, with the lo-fi dynamic maintaining a constant build and release of minor tensions whilst occasionally shifting between moments of tentative melodrama and hypnagogic restlessness.

As the first drones of woodwind and brass on opening track ‘Going’ tumble through a rich acoustic strumming that gradually becomes more weighted and sombre, the rising cymbal crashes and fragile vocal strains offer a passage into the rhythmic relief of ‘Carios Kelleyi I’, which feels backlit by the influence of the Beach Boys and the steady rumble of old, post-countercultural Americana. A gentle rhythm is the anchor that allows for much of Lynch’s experimental divergence on Lines, with the clarinet, saxophone, steel guitar and violin all crossing over one another in tangents to give the overall impression of a forlorn, tape-recorded lullaby. ‘Carios kelleyi II’ in particular portrays this sense of timid coaxing well, and at moments hints to the likes of Animal Collective, Entrance and Syd Barrett.

There are points where this anti-formula is strained though. Title track ‘Lines’ is possibly the most simplistically structured, yet also where Lynch’s deliberately ambiguous vocals and lyrics become grating. The instrumental movements are so delicate that his voice frankly isn’t needed, and it leaves it feeling laboured at points. As much as Lynch is trying to put across the ‘voice as instrument’ motif here – which he does well for the most part – songs like ‘Lines’ perhaps hint to a problem at the core of his vocals. Is he being deliberately evasive with being so indecipherable – that the lyrics are of no consequence that that the voice should merely be a pure sound within itself – or is it in fact a lack of confidence in his own abilities, which he then compensates for with the overall dynamic and timbre of the sound? It’s not particularly clear which is the case, but it doesn’t degrade the overall experience of Lines as an LP, a fair and fine experiment in folk that sees a more mature and worldly Lynch gently come to the fore.