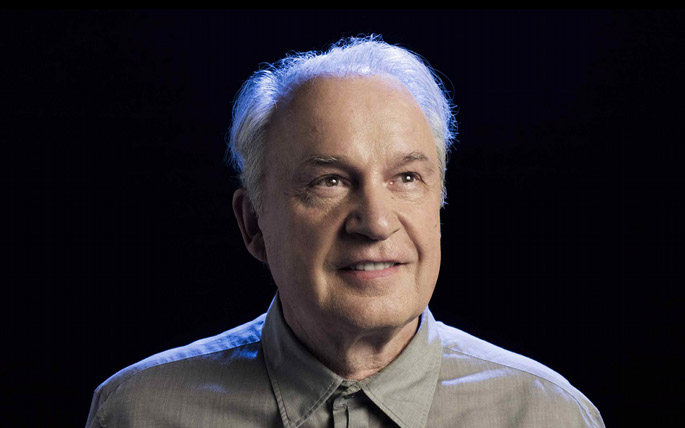 Perhaps Giorgio Moroder’s fate was written in the stars – his last name must be one of the few that actually rhymes with his favourite instrument, the “vocoder”.

The grandfather of modern dance music, his use of early synthesizer and sequencing technology revolutionized the sound of disco music in the late seventies, and gave birth to a wealth of genre records, in particular the euro-disco subgenre known as “Italo-disco”. In some ways you can also identify his emergence as the birth of the producer-as-artist in the contemporary sense, the point at which the person pressing the buttons and building the backing track begins to grace the cover of the album too.  His career as a soundtrack composer earned him three Oscars for his work on Top Gun, Flashdance and Midnight Express, as well as three Grammys and four Golden Globes – an impressive resume for a humble Italian lad, who began his career in the ’60s as a pop star, singing novelty songs on national television. Here’s a brief tour through 10 of his most compelling moments, which should help you get a sense of why the synth master’s work is so loved and respected, and considered so hugely influential on modern music. 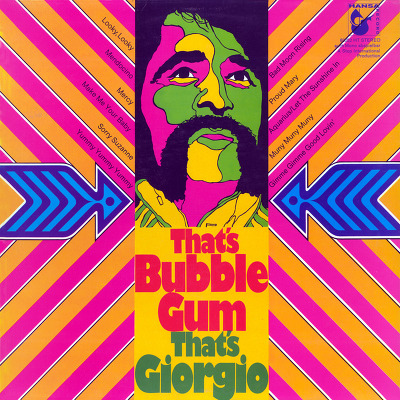 Giorgio’s debut album really has very little to do with the rest of the career that followed, but it’s a nice illustration of the unsophisticated ’60s era that disco helped dispel from collective memory, a time where European popstars were content to stagger around stages in their flares, chanting nonsense lyrics at enthralled TV audiences. This album is packed with the cheery continental flavor of the time – family favourites like ‘Aquarius / Let The Sunshine In’, and repetitious pop songs with daft refrains like “Looky, Looky” or “Yummy Yummy Yummy”. Despite this, it’s a fun document of a young Moroder on the other side of the mixing desk and in front of the spotlight, years before he discovered the synthesizer technology that would change his path in the industry. Perhaps it was experiences like the making of this album that shaped his unique understanding of how to direct artists and achieve results that were simultaneously commercially viable, but also packed with eccentric personality. 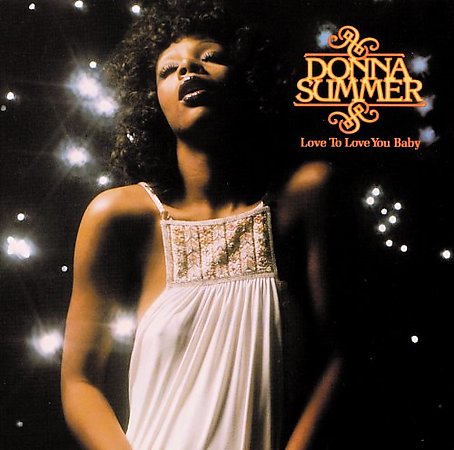 One of the records that helped countless parents populate the earth with their progeny, ‘Love To Love You Baby’ is quite literally a multiple orgasm in musical form. The story goes that Casablanca Records’ president played the original three minute version at one of his house parties, and got sick of rewinding the tape, instructing Moroder to commit a much longer version to history. The result is 16 minutes of provocative, seductive grooves, paving the way for all sorts of liberated, sexualized dance music to come, including Lil Louis’s ‘French Kiss’. Though Donna’s career benefited enormously from the worldwide exposure, she often commented that her transformation into a hyper-sexualized “first lady of love” was at times a tough and restricting role to play. 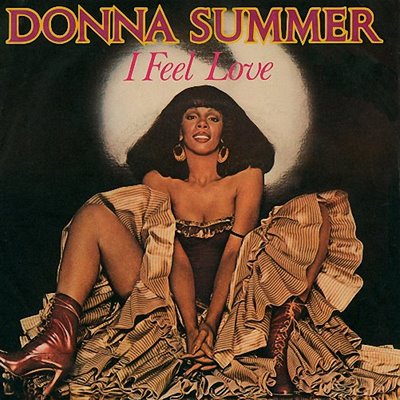 A genesis moment in dance music history, the first time a track was powered along by a stuttering synth sequence alone, ‘I Feel Love’ exists in millions of cover versions, remixes and rehashes, none of which are worth bothering with as they will never ever compare. It’s interesting to think about the song in the context of the album on which it appears, I Remember Yesterday, which Giorgio produced – Donna sings her way through time, exploring the music of the ’20s, ’50s, and ’60s, climaxing with the experimental sounds of the future, ‘I Feel Love’, at the end of Side B. The attention to detail and sheer desire to challenge the tools at hand in order to achieve this conceptual tangent made it a self-fulfilling prophecy, future-proofing Donna and Giorgio’s trademark Moog arpeggio for all time. 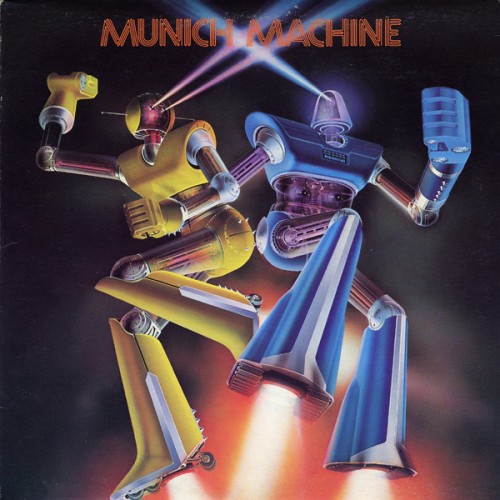 Moroder was the lead producer of this disco outfit, who took their name, imaginatively, from the German town in which they were based. Seems highly appropriate and relevant to raise it given the two colourful robots on the cover – of course you are rather too aware at this point of the two French robots whose album he’s recently contributed to. This album is packed with cheesy, sentimental, moonlight disco moments, but it has plenty of tough grooves too, like the 15 minute long Philly Disco inspired cut we’ve picked out here, ‘Get On The Funk Train’. There’s a Loading Video…

” target=”_blank”>sublime alternative version of ‘Love To Love You Baby’ hidden away on this album too, which pushes the tempo of the original up a few notches, and goes in hard with the wiggly-worm Moog solos. Overall, an enjoyable, high quality and remarkably slept-on disco album. 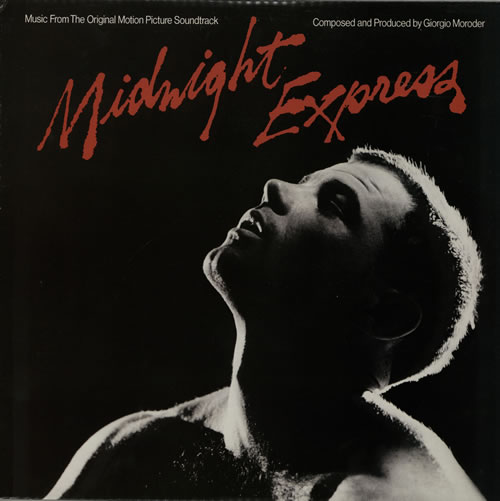 Sublime, funky electronica, enhanced with live strings and those all important “boooo” disco tom sounds, this still sounds fresh and exciting today. In melodic terms Midnight Express draws on a wealth of eastern scales and exotic flourishes, and the chugging, Balearic title track is something of a sunrise acid party classic. Have a listen, and you’ll see why this one is also entirely relevant to the interests ofDetroit hip-hop fans. 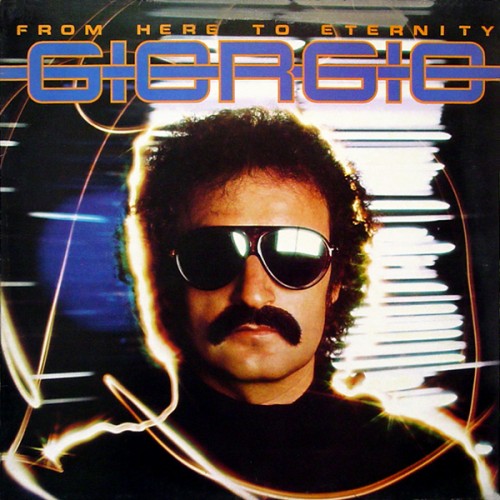 Timeless, proto-Italo classic that never loses its potency. The vocoded introduction, hazy chord changes and camp brilliance of the title track were often imitated but never really bettered by the legion of Eurodisco and Italo copycats that followed. From Here To Eternity also has a striking cover photo that seems to have part-inspired the look of Arnie’s Terminator, and a copy of it can probably be found in a charity shop near your local branch of Greggs, which is why it continues to inspire numerous producers who have chanced upon it over the years. One of the highlights is the brilliantly titled ‘Utopia – Me Giorgio’, which as well as portraying Moroder’s essence better than we ever could, is one of the most beautiful arpeggios he’s ever written. The roots of techno’s futurism are writ large on this record. 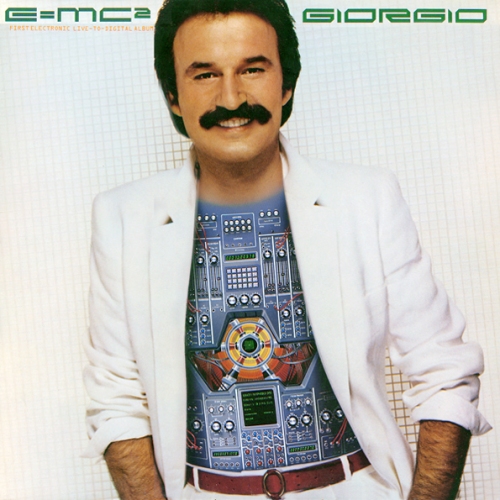 That shirt he’s wearing on the cover must be one of the best shirts in the history of cover photography, but I digress – in relative terms, E= MC2 is as massively energetic as the title implies. This is a smoother listen than From Here To Eternity, and arguably more indebted to orchestral disco, Cerrone and the pop standards of his past than the further-out electronics of its predecessor.  The melody of ‘E=MC 2’ always reminds me of Chicago – “Street Player” (or The Bucketheads, in turn), whilst the distinctive chorus, “I wanna love youuuu” sung through a vocoder, never fails to lift the sagging spirits of a tired dancefloor in the early hours of the morning. Meanwhile, opener ‘Baby Blue’ seems like the kind of cheery go-go that Phoenix probably did their homework to. Cute, colourful and sonically unique, but not quite as inspiring as From Here To Eternity, even though the cover looks like it should be. 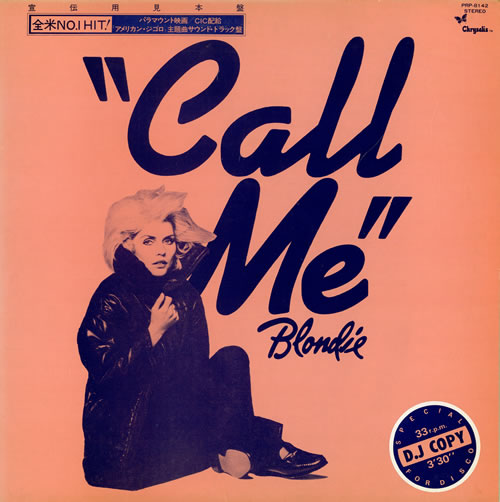 A wedding favourite to this day, Giorgio put the instrumental together and brought it to Debbie Harry, who reportedly nailed the refrain and catchy chorus in a few hours. ‘Call Me’ remains an incredibly arresting song, with a kind of punk energy to it. It tattoos itself instantly on the mind of the listener, which is arguably what genius songwriting is all about – Debbie’s voice occupies a unique kind of register, shrill and powerful, cutting through the backing track with ease. 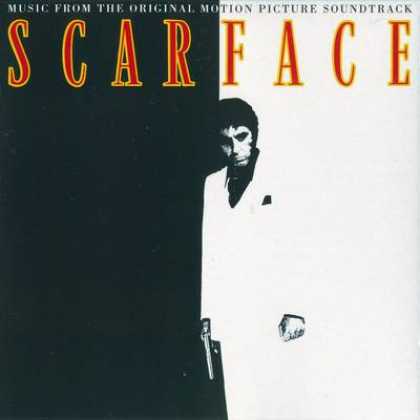 Say hello to my little friend! Moroder’s score evokes the themes of the film beautifully – the decadent excesses of Tony Montana’s cocaine-fuelled lifestyle are brought out in every twinkling synth lead and moody pad sound. One of his most influential scores, and very popular with samplists and the hip-hop set in general, for obvious reasons – this made a welcome return to popular consciousness when it was licensed for the blockbusting Grand Theft Auto video game franchise. Interestingly, a fragment of this soundtrack also underpins Kanye’s recent belter ‘Mercy’, featuring Big Sean, Pusha T and 2 Chainz. 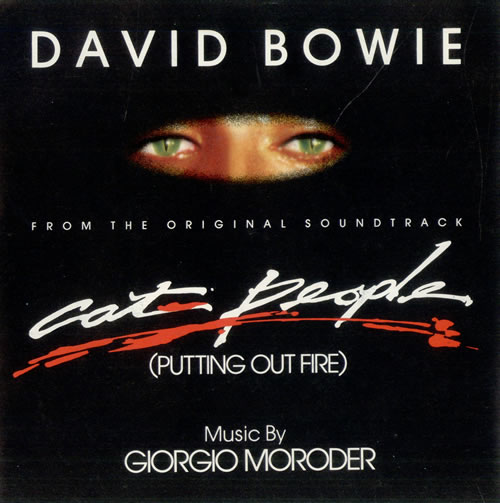 ‘Cat People’ is taken from the soundtrack of the 1982 horror / fantasy film of the same name. It’s a beguiling mix of influences, oddly gothic, and unlike any thing else in the Bowie oeuvre – hard hitting ’80s drum machines and sampling experimentation that is reminiscent of Moroder’s collaboration with Japan on the Assemblage album. The rest of the album is well worth a listen too, Giorgio pushing out in all sorts of sprawling directions, probably thanks to the general oddness of the feline flick he’s scoring. I suppose you could accuse this of being “proto-witch house”, or early gothic electronica if you felt like being slightly facetious and provocative – a bit of a stretch of the imagination, but also along the right sort of lines.