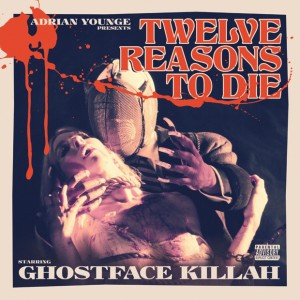 Trawl through Ghostface Killah’s back catalogue and you’ll find an enduring obsession with the excess and theatre of cinema. It’s clearest in the shameless sampling of blaxploitation films in Ironman and kung-fu movie dialogue in Enter the Wu-Tang: 36 Chambers, and reflected perfectly in his much-aped but rarely matched aptitude for storytelling. Released fifteen years into his career, Twelve Reasons To Die betrays a continuing fascination with the art form, evident in both its style and conceptual scaffolding.

Essentially a revenge drama styled as a vintage horror movie, Twelve Reasons To Die is the tale of Tony Starks who, after his murder by the DeLuca crime family, rises again to wreak vengeance as Ghostface Killah. The twist? It was his femme fatale love who betrayed him all along. Perhaps not the most original of storylines, then, but that’s just fine: there’s a reason certain stories and styles become enshrined as classics. As such, the pairing of Ghostface with prodigal soul producer Adrian Younge, also behind this year’s revival of ’70s soul act the Delfonics, makes perfect sense. Though this is Younge’s first hip-hop record, he seems born to the task, realising the conceit inside out. His fidelity to classic motifs and rich, warm production is hardly innovative, but he’s able to breathe new life into old sounds. Take the opening soprano chorus (in the classical Greek theatre rather than pop sense) of ‘Beware Of the Stare’. It recalls the high drama of Ennio Morricone spaghetti Western soundtracks, and paired with Ghostface’s bars, gives the track its cinematic edge. ‘Murder Spree’, on the other hand, is closest to vintage Wu, with a lazily grooving beat and lyrics on a “torture, motherfucker” tip. Ghostface opens with “a dozen ways to die, six million ways to do it / Let’s go through it, my mind flow like fluid” before enlisting Inspectah Deck, Killa Sin, Masta Killa and U-God (!) to enumerate dozens of creative ways to kill a man.

Twelve Reasons To Die isn’t just throwback production and standard-issue movie themes, though. There’s some serious violence and brilliant quirks, too. In ‘The Rise Of the Ghostface Killah’, for instance, which also contains a heartwarming allusion to ‘Clan In Da Front’, Tony Starks’ remains are pressed into twelve pieces of vinyl, one for each member of the DeLuca family. ‘The Sure Shot (Parts One and Two)’ pairs roiling drums, fluid keys and nasty bassline with a hookless rap. At first spitting out dense, vitriolic rhymes as easily as breathing, Ghost grows regretful at unnecessary loss of life. The song ends on a question – “Should I kill her? / Throw her ass in a cage with a gorilla” – and though he doesn’t explicitly answer it, you’re left in no doubt as to her fate.

“My plots are like movie scripts, they well planned” Ghostface raps in ‘Revenge is Sweet’, and to some extent it’s true. But as any writer will tell you, a narrative has greatest impact when it gets to the point. Twelve Reasons To Die simply doesn’t contain enough plot material for its twelve tracks, so tracks like that ‘The Center of Attraction’, Capadonna’s warning to Ghost that his girlfriend is a “set-up chick”, feel superfluous. The chorus device also gets pretty tiresome by the end. If Twelve Reasons To Die were a film, it’d be a Peter Jackson production: beautifully executed, knowingly historical and rich in surprising detail, but twice as long as necessary. Though Younge’s production may be the star here, Twelve Reasons To Die is the work of a rap game veteran who in the autumn of his career still has plenty to offer.