New talent: alt-R&B vocalist SZA on “snatching” tracks and putting her music in the universe 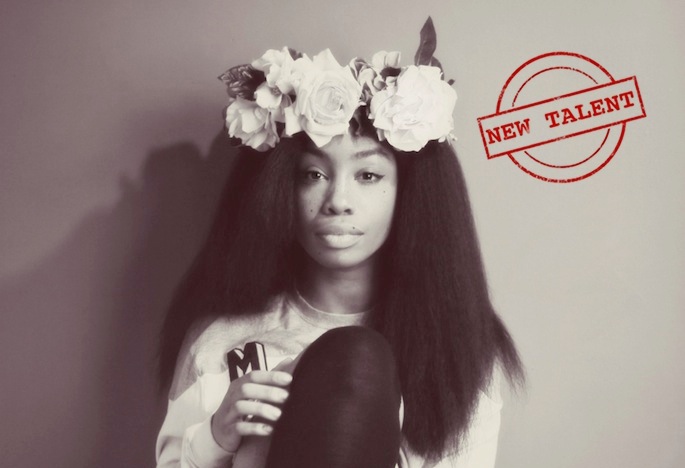 I first saw singer-songwriter Solana ‘SZA’ Rowe perform at last year’s edition of CMJ. When speaking with her, I had barely mentioned the gig at the East Village’s Drom before she cut me off. “That was awful, that was my first show ever in life,” she laughs. “The sound was funky as hell, I had no band at that point, and I was totally winging it.”

While she may be her own toughest critic, there was enough of a spark at that problem-plagued early show that told me SZA was an artist to watch. Last October, she released her debut EP, See.SZA.Run, forging a symbiotic relationship between her soulful, smoky singing and woozy, cloud-rap influenced instrumentals. She describes the process of recording the first EP as “experimental,” without a larger goal in mind.

“I stole a lot of those beats,” she admits, noting that “snatching” tracks by ex-Odd Future member Brandun DeShay led to actually working with the young producer; DeShay and Kanye-associate 88 Keys would provide the dreamy ‘Country’ (based on the Empire of the Sun song of the same name) with drums.

This month’s S EP forgoes stitching together borrowed beats, instead relying on music that was definitely crafted with SZA’s vocals and expressive lyrics in mind. Generally, the producers seem to be taking their cues from SZA’s New Jerseyan Clams Casino. SZA’s own influences run the gamut, from Animal Collective, Beirut, Fever Ray, and The Knife to Ashanti’s first album, or jazz standards by Miles Davis, John Coltrane, and James Moody. “It’s just whatever I listened to,” she explains, saying she also finds inspiration in the “super woodsy, wide-open spaces” of her Maplewood, New Jersey home.

“If there was someone I could mimic for the comfort of my career, not even sonically, just the freedom, it would be Björk or Sade, because they do whatever they want to do.”

In the studio, SZA eschews preparation for a free-styled approach. “I don’t believe in doing more than one take or drafting,” she says. “If the song isn’t the way I want it before I leave, it’s probably not going to get there.” There’s definitely a zen-like attitude to her process. “I want to stay organic and honest, not take myself too seriously, just be,” she explains. “You put it out there, people may fuck with it, they may not. If they do, that’s awesome, but if not, I still have a chance to put it in the universe.”

She describes her writing process as “conversational,” relying on real or imagined dialogues, either with herself or with people learning about her, for her lyrics. For example, she points to the absurd, tongue-in-cheek lyrics of ‘Aftermath’: “…I am not human / I am made of bacon / fairy tales, pixie dust, I don’t feel / I hung myself, I didn’t die / I’m omnipotent…”. “The first verse is about me being annoyed and angry about how people view you or talk to you like you’re inhuman,” she says. “It’s a condescending thing. Wouldn’t you love to believe that I was made of bacon or that I had no feelings or was made of pixie dust… that’s what you really believe, right?”

SZA is definitely not alone in exploring the triple point of R&B vocals, pop songcraft, and hip-hop beats, and she’s been grouped with a “hodgepodge” of comparisons: Purity Ring, a female Frank Ocean, “kind-of” The Weeknd, Solange, and Kilo Kish, to name a few. For those exploring similar fringes, there’s a tendency for artists to be pigeonholed as Other, but she seems to take it in stride. “I have no intentions of being King Bey, or Rihanna for that matter,” she laughs. “If there was someone I could mimic for the comfort of my career, not even sonically, just the freedom, it would be Björk or Sade, because they do whatever they want to do: they disappear, they come back, they chill out, they have kids, they smack reporters, it’s whatever.”

In just a year, SZA has gone from her first performance at CMJ to some big — if secret — plans for 2013. “Everything has been coming a mile a minute – somethings I don’t want to jinx,” she teases. “There’s going to be a surprise for everyone. I’m surprised, shocked and appalled and excited. I’m having a blast.”