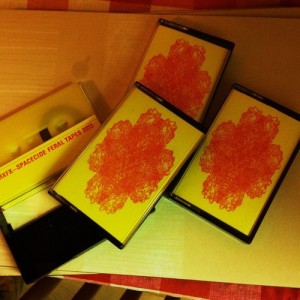 Dave Henson has been quietly industrious for years now; creating and releasing music as Nochexxx on labels as far ranging as his own (now defunct) Tripel Records, Werk Discs and Ramp, his output has steadily grown weirder and wilder over time.

A striking split cassette with Ekoplekz on Further Records last year saw him take on a new pseudonym as CHXFX to make Exoferric, followed quickly by an album of modular synth experiments, The Unhaptic Synthesizer. However, it is on his latest release Spacecide for Feral Tapes that CHXFX has come into its own as a project.

The album is a fragmentary journey of musique concrète, tracks ranging from 14 seconds to 8 minutes in length and varying drastically in density and focus. Particularly satisfying for the discipline is Henson’s ability to arrange and coordinate these into some semblance of narrative over the release; a notable sequence is the jump-cut breath of shock and sickening thump that end ‘Space Dusting’, unexpectedly sidestepping into the spaceship hoover blast from ‘Saucer Bump’, only for its brief aggression to be quickly subverted by the floating entry of ‘Stratosphere Men’’s winding, frosty synth melody.

As the titles suggest, allusions to Henson’s love of UFO culture and general oddity – always a staple of his sound – remain. It can get a little over-familiar in places, such as the meandering, heavily delayed kosimiche of ‘Sit_Tilt_Hover’, triplet sawtooth arpeggios of ‘Escape From Breeders Colony’ and ’60s distortion melody of ‘Touch Baze’, but overall Spacecide shows an admirable grasp of directing this potentially kitschy, retro element into fresher territory, much as Broadcast managed with their seminal Microtronics EPs.

Highlights include the plunking patterns and tape-speed melody of ‘Self Watering Botany’, the Oneohtrix Point Never synths and violent thumps of ‘Space Dusting’, and the straining flight of arpeggio circles in ‘Mandeltots’. ‘Skesiscide’ is a menacing mixture of floating scream tones and found sound broadcast, ‘Parked Beneath Outer Layers’ crashes and flows like a helicopter breaking orbit, and ‘Aquadicinal Hunger Force’ rewards the listener’s trip through squealing jets and sine tones with a recording of some truly wonderful bubbling liquid.

While the proud sci-fi influence may not be for everyone – including, it should be said, me – Spacecide is every bit as good as Exoferric in technical execution and realising of truly madcap ideas, and makes for an interesting juxtaposition. Even better, however, is that finale ‘When Orbs Attack’ may also be the funniest piece of music I have heard in years: Henson constantly interrupting a cringe-worthy recording of people fleeing ‘UFOs’ in their car with monstrous, explosive noise. Although I guess you have to hear to it.