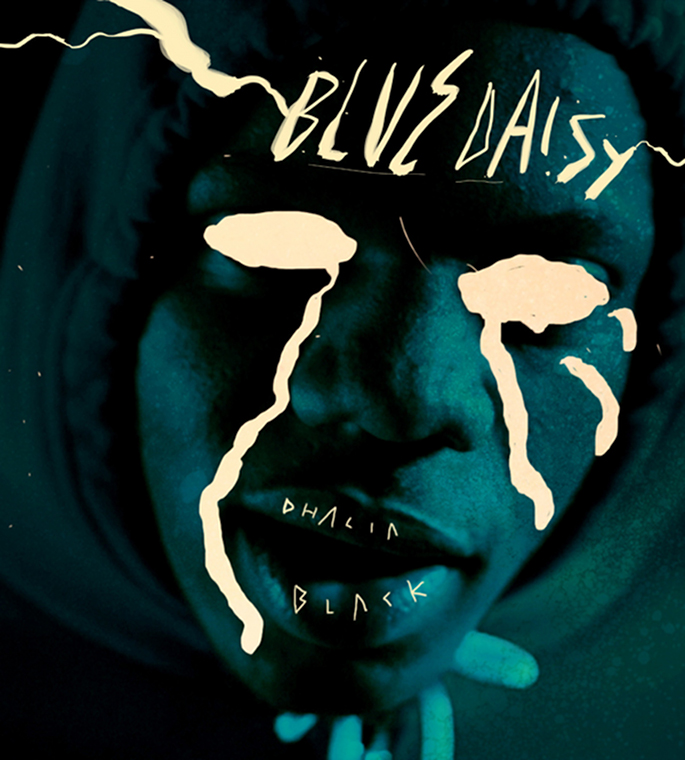 Daisy – aka Londoner Kwesi Darko – has been Black Acre’s resident dreamweaver since 2009, putting out a string of EPs and singles of trip-hop and head-nod. 2011′s cinematic The Sunday Gift, meanwhile, saw him take to the full-length format like a phoenix to fire water. Work with the mysterious (and, brighter brains than us have mooted, fictitious) ∇nknown ShΔpes has followed – but his biggest breakthrough has arguably come with ‘Fuck A Rap Song’, released under the Dahlia Black moniker. As we once put it, “Dahlia Black is to Blue Daisy as Venom is to Spiderman” – a pantomime villain making a churning, drug-damaged approximation of the classic Three 6 Mafia sound.

Having just dropped the Used To Give  A Fk EP on Black Acre, credited to Blue Daisy and ∇nknown ShΔpes, Darko took some time to speak to FACT about his current projects. As we discovered during our exchange, the inaugural Dahlia Black mixtape is currently in the works.

According to the producer, the tape will “cover a lot of ground”, offering a fusion of “Greek mythological, Goth, punk-rock [and] minimal rap”. ‘Fuck A Rap Song”s horrorcore crush looks set to continue, with subject matter on the tape ranging from “fucking hindu chicks to threesomes”. The as-yet-untitled tape will arrive in June.

Used To Give A Fk is out now; the disorientating title track is available to stream below. The Dahlia Black tape, meanwhile, will follow in June. Scroll down to read our full chat with Darko.

What inspired the transformation from Blue Daisy into Dahlia Black?

There has not been a transformation, Dahlia Black is not an alias, it’s a movement, a movement which spreads further than just music. A movement yet to develop into it’s full potential, there’s a lot more to come from this. The “rap” world, especially the UK “rap” world, inspired this rebel movement of “used to give a fuck” individuals that aren’t here to make allies but here to say fuck your “Rick Ross” chat and “I’m a trapstar” swagger, like fuck you are, don’t get me wrong, there are a few peeps out there who do it well even if they ain’t, I.E. Rick Ross but as much as I listen to Ross, I ain’t him and DB are here to say we are who we are, like it or go Fuck your fucking rap songs!

What can we expect from the Dahlia Black tape?

Greek mythological, Goth, punk-rock, minimal rap . I feel like we cover a lot of ground on the tape, anything from death to psychedelic trips, fucking hindu chicks to threesomes. There’s a lot to expect!

‘Fuck A Rap Song’ was clearly a nod to the darker end of US rap; what is it about that sound you find compelling?

I tend to find my source of inspiration from a dark source within me, so I figure it is a natural connection I have with that side of rap, no one in UK is really pushing the boundaries within the “hip-hop” scene, I see peeps trying to but it’s like a weaker duplication of some one else, my production has always derived from the dark realms and all I have really done, to be honest, is incorporate what was already the Blue Daisy sound into a dark rap direction and become vocal about my thoughts rather than putting them all through the medium of instrumentals.

You’ve now amassed your fair share of aliases – what different creative opportunities does each one afford you?

The US/UK beat scenes continues to thrive and surprise. Which beatmakers are you currently taking inspiration from?

SKYWLKR is a boss, there’s a dude called Whoarei who is ridiculous aswell, my Dahlia Black fam from SD/LA “Feend”, he’s on a some different tip too, a madness!  Erm, SpaceGhostPurrp, Strange VIP and the darg Darq-E-Freaker. These are a few I’m really feeling at the moment.