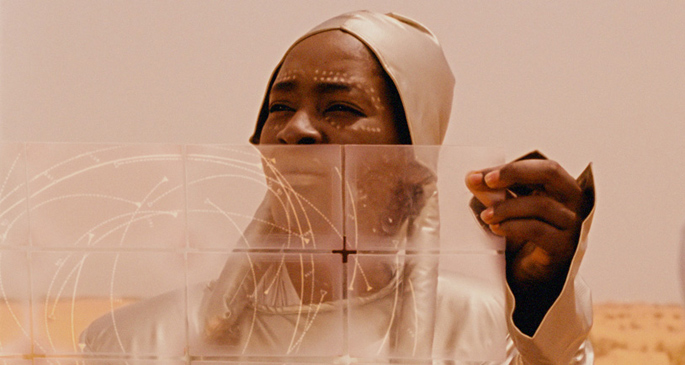 Soul of the Sea.

German filmmaker Simon Rittmeier has pieced together a short film that is likely to be of some interest to dedicated followers of Detroit techno music. Entitled Drexciya, it isn’t the history of the fabled electro innovators, but rather a science fiction short that appears to be influenced by the duo’s Afro-futuristic inspirations.

From what we can gather the film appears to be set in a world in the not too distant future, and finds a man who makes his money smuggling European refugees to Africa in search of a better life shipwrecked and washed up on the continent’s shores. From there he encounters three young Africans Sisay, Kanchebe and Dylis, who are in search of the technologically breathtaking city of Drexciya.

This sounds to us pretty far from the Drexciyan back-story we gleaned from the duo’s extensive liner notes; we can’t see any reference to the “water-breathing aquatically mutated descendents of those unfortunate victims of human greed”, but not having seen the whole film there’s no reason why it won’t link back. From the trailer and the synopsis, we can’t help but think it looks a little more like Black Panther’s Wakanda than Drexciya.

It’s not the first time that Drexciya have been used as the inspiration for a short film, in 2010, Ghanaian filmmaker Akosua Adoma Owusu made an award-winning short film also entitled Drexciya which focused on an abandoned swimming pool known as Ghana’s first pleasure beach. While this might not have been science fiction, its post apocalyptic vision certainly ties in well with Drexciya’s haunting mythos. [via Darkfloor]