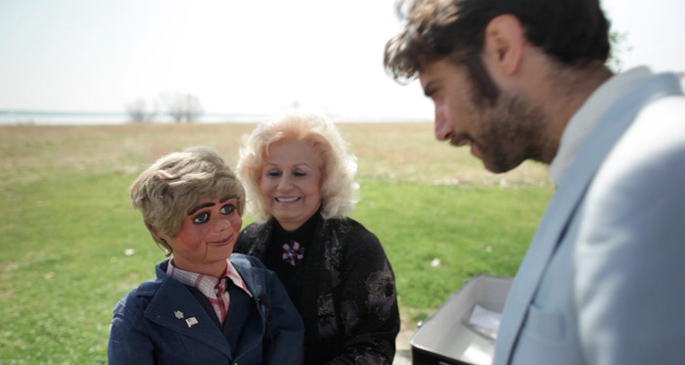 As is so often the case, it all started with a girl.

The girl in question was a Christian ventriloquist on the cover of a dusty LP, and ten years ago when filmmaker Joseph Fletcher came across the record, he picked it up thinking that it reminded him of his girlfriend. To cut a long story short he ended up with a broken heart, sold all his possessions, and embarked on a journey through the American South to discover where the hell that peculiar record came from. Trawling through thrift stores the filmmaker discovered that this privately pressed gem was far from a one off, and he managed to quickly amass an enviable collection of bizarre and endearing LPs all of which seemed to carry some kind of story or other.

We only get a brief look at the film in the handful of clips that have surfaced online, but shot brilliantly it seems to capture a rarely seen Lynchian side of a much maligned part of the world. Beneath the comical sleeves and behind the often very twee music are stories that simply couldn’t be made up (cannibalistic dogs, transsexuals and murder?) and if that doesn’t warrant a closer look, we don’t know what does.

Fletcher has set up a Kickstarter to raise the final funds to get American B-Side finished and there are plenty of good reasons to donate, ranging from MP3s and CDs to having the man himself DJ at your very own party.

Since returning to the UK, Fletcher has found a use for some of the music and started piecing together his own BBC radio show Southern Tracks, you can listen to parts one and two on iPlayer now.