And this one time… The best Bandcamp releases of the month: May 2013 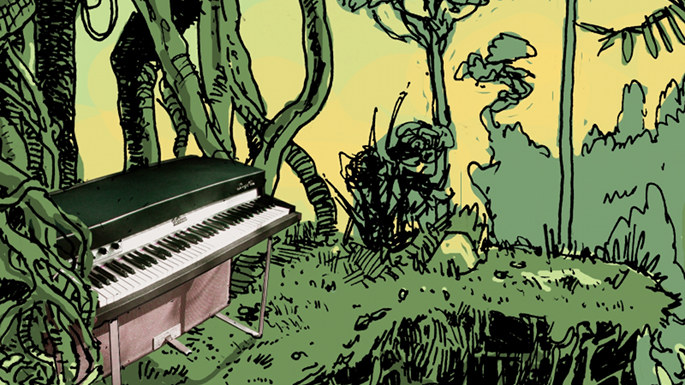 It’s a refrain we should all know by now: the music industry is no longer what it is. The future is still blurry and in flux. Artists have more control (if they want it). The internet will save everyone (just not right now).

The truth, as always, lies somewhere in the middle: between the overblown claims of the old industry’s death and the overstated healing powers of the latest internet solution.

In the five years since its launch Bandcamp has proven itself to be one of the more realistic solutions to some of the industry’s woes. It’s done this by offering a believable blueprint for artist / fan relationships, one that appears more viable with each passing year and which in turn has made the site one of the best places online in which to browse, discover and support indie music.

The idea behind Bandcamp is nothing new. If anything the process of buying something directly from an artist, and the pleasure that comes with it, is a more streamlined, easier version of buying CD-Rs, 12”s and tapes directly from artists or small labels via music forums and then Myspace back in the pre-social network era of the 2000s. The potential of this simple idea is best summarised, in true internet fashion, by a comic from The Oatmeal.

The music industry of tomorrow is still taking shape in front of us, and while Bandcamp is no panacea it has proven itself a worthy tool for artists to cutting out the middlemen and deal directly with their audience – so much so that it’s now home to not only myriads of unknown bands and artists but also more established names and a growing amount of quality indie labels such as London’s One Handed Music, Brussels’ Vlek Records or Ann Arbor’s Ghostly International. If there’s one stat worth dropping it’s this one: to date people have paid 38 million dollars to artists and labels via the website.

With this in mind, this new monthly column has a simple aim: showcase music available on Bandcamp from artists both known and unknown, music that might fly under the radar of today’s unrelenting news and consumption cycle and which isn’t always easily available outside the platform either. The idea is to bring you as diverse a selection as possible (I’m only one man, so, you know…), hopefully turn you onto some new stuff and in the process invite you to go and support the artists more directly. As it happens the launch of this column also ties in with Bandcamp’s recent homepage relaunch, which is well worth checking out. On with the show…

STICK IN THE WHEEL
EP1

Back in the late 00s, Various Production released a series of 7”s that featured one of their trademark blistering electronic production on one side and a folk track on the other. These curveballs were the handy work of Ian Carter, a London-based producer and musician who these days goes by the name EAN for his solo work and who also plays guitar, writes and produces a folk band called Stick In The Wheel alongside two female vocalists, Rachel and Nick, who appeared on the aforementioned Various releases.

The band’s debut release is a four track EP that includes a traditional London folk song alongside three of the band’s own. Written, performed and recorded in living rooms and kitchens the music is as authentic as it comes, at times brutally honest and grabbing.

Available as handmade CD or digital.

The Machina Muerte collective have put out some interesting music over the last few years and this release by Humansuit is as good a place as any to start discovering them.

Composed of founding members Isaiah Toothtaker (who dropped an EP produced by Sixtoo last year) and Mestizo (who’s been around the LA hip hop underground for close to a decade), Humansuit’s self-titled debut is a hip-hop album with little boundaries, alternating between neck-snapping bangers, bleak street raps and emotive songs with ease. There’s a stand-out cut in the shape of the Crimekillz collaboration (which brought me to the album in the first place), an 8-bit, punk meets hip hop tale of emotional woes.

I discovered those guys via a Twitter recommendation from a friend about a month or so ago, at which point the Bandcamp had little more than the music to offer as an explanation. Since then the page has been updated and it would appear that Manj is the result of a two-year recording process by a Santa Cruz quartet featuring a string of guests on vocals and additional instruments.

An expert blend of organic instrumentation and studio production, the album is a sunny slice of feel-good hip hop, soul and rnb with lush composition and vocals that offers quite a few cuts ideal for the summertime.

London trio LV have always been a sure bet when it comes to keeping you on your toes. Following their second album for Hyperdub last year, two thirds of the trio have split out to form Swami Million, inspired by a desire to build on unpredictability, swing and errors. The project functions in both the live and studio environment, trying to capture in the latter the best parts of the spontaneity inherent in the former.

The debut release on their own Alter ID label is Sours, a two-track single of epic hip-hop proportions. Crushing drums, fizzy melodies, sound system heavy bottom end and grooves so dysfunctional they should come with a health warning.

Electric Jalaba is one of the more striking meetings of traditional and modern music I’ve had the pleasure to discover in recent years, combining Morocco’s Gnawa music with electronic production and live improvisation. The band was formed when London producers Soundspecies, who’ve previously worked with the likes of Foreign Beggars, Om Unit, CDR and more, met Moroccan Gnawa master Simo Lagnawi at a festival. They soon found themselves jamming and booked a studio session, the results of which form this first official release as well as the backbone of their ongoing live shows (which really must be seen to be believed).

Introducing Electric Jalaba is fitting of its description as space age Gnawa experimentations. It’s a heady trip from a group of talented and versatile musicians, a trip that makes beautiful musical sense of a wealth of influences and traditions, and even manages to circumvent that dreaded “world music” tag by giving you something honest and striking. Think Maga Bo with a Sun Ra twist.

Available as CD or digital.

If you like compilations, Bandcamp is the proverbial candy store. This particular volume from the Sonic Boom series by New York’s Giant Step is a stand out from recent months, bringing together a selection of dance and hip-hop music united by a soulful leaning and slick production.

Vol. 3 puts forward some established names, including the Madlib-produced ‘Burgundy Whip’ by MED and Blu and new tracks from Stacey Epps and Shafiq Husayn, alongside a string of artists I’m new to but who stand their own quite well, making this more than just a fillers-with-a-few-killers offering.

As mentioned before, Bandcamp’s been adopted by a fair few established artists, and interestingly enough there seems to have been an increase in electronic producers coming to the platform, perhaps energised by the possibilities afforded by speaking directly to their fans. One of these is 4Hero’s Marc Mac who added his Omniverse label to the website last year. Their latest release is The Third Adam, a new album from Marc’s Nu Era moniker.

Based on the five tracks currently available to stream – the whole thing drops on May 20 – it’s quite clearly both a celebration of the producer’s love for electronic music in its various shapes and the gear used to make it. Analogue warmth pervades throughout uplifting productions, with Marc’s clear penchant for soulful music shining throughout.

Available as gatefold CD and digital (released May 20).

Every month one release will be highlighted based purely on a random (or as random as I can realistically get) tag search on Bandcamp. This might be as good a time as any to admit that the idea was partially inspired by Adam Harper’s essay on Bandcamp published by Dummy last year. So thank you Adam.

First up is an album by Fuckwalker, which I came to while browsing the “sound art” tag. It was the cover that grabbed my eyes, and based on that I was expecting it to be some fairly experimental stuff. As it turns out it’s quite an “easy” listen and, without taking anything away from it, it’s perfect background music

There’s no information on the page, with the tags providing the only clues, including the location (Los Angeles and Argentina) and part of the music making process (“1 take” and “free improvisation”). At a guess I’d wager those latter tags refer to the bass on some of the tracks as well as some of the non-rhythmic instrumentation, but ultimately it doesn’t really matter. Fuckwalker_33.om is a gentle listen, one that sounds and feels like a product of the technology that brought me here in the first place.