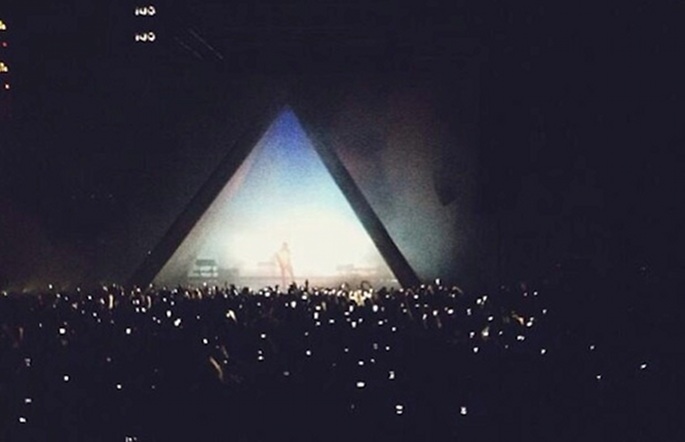 The rapper made an unexpected appearance at Adult Swim’s Upfront event at NYC’s Bowery Ballroom. Performing inside a giant pyramid, he unleashed a clutch of new tracks on a crowd of willing guinea pigs. Clips of the new material are available to watch below and, as per those snippets unveiled by Hudson Mohawke, suggest a tougher and ravier sound than Kanye’s last record, the sky-scraping My Beautiful Dark Twisted Fantasy.

As Complex note, the set also featured one of Kanye’s vintage rants, this time directed at the paparazzi – read a scabrous excerpt below, or scroll to the bottom of the page to watch:

“I ain’t no motherfucking celebrity. I ain’t running for office. I ain’t kissing nobody’s motherfucking babies. I drop your baby and you sue me and shit. I’m trying to make some music that inspires people to be the best they can be. I don’t want nobody to ask NOTHING ELSE OF ME. Don’t ask nothing else of me. Motherfuckers chasing you down ’bout to make you crash and shit. And all they want is one nigga to laugh and shit. Hell nah I ain’t doing no motherfucking SNL skits, this my goddamn life. This ain’t no motherfucking joke. That’s it. Stop that shit right there.”

Kanye’s sixth studio LP is expected in late June, although no release date has been officially confirmed as yet.