Piracy and the downturn: are Britain’s music festivals becoming unaffordable, corporate and middle-aged? 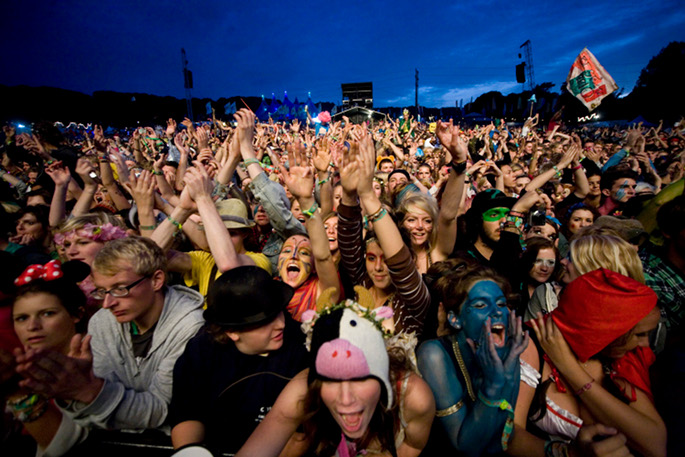 According to last week’s poll conducted by MSN for Gigwise, 60% of young people are unable to go to a music festival this year as they have become prohibitively unaffordable.

The survey also revealed that the average age of British festival-goers is now over 35, presumably because the less-affluent, younger punters make up proportionately less of the crowd these days. The survey of 2000 people reads more like an MSN press release than a robust piece of research, but its statistics contain a kernel of truth: festivals are less affordable than they used to be.

But why have prices in a festival market that has become so much more competitive over the past decade not got, well, more competitive? One good example is Glastonbury which has doubled its ticket prices in 10 years.

Music industry analyst Mark Mulligan says that the main reason is that artists now demand higher fees due to the declining sales of physical formats. “The big background trend is that since Napster came along the sacristy of recorded music has disappeared so live music is the one scarce product the music industry has to sell,” he explains, “Teenagers and people in their early 20s increasingly can’t afford to go to festivals. The harsh reality is that festivals like Glastonbury can thrive without them if they need to because there’re so many 30-somethings who are willing to pay the money.”

Mulligan says that UK festival owners are getting hit by the greater fees demanded by artists and promoters, who now face profit margins that are much more slender than they were in the past.

“Not only can young people not afford to go to festivals, they can’t afford to do anything.”

“Our bill for DJs this year has at least doubled on last year,” he says, “Promoters run very tight ships these days and they sometimes get away with not spending anything on creative for their shows…Five years ago new bands used to charge around £150 to play. Now some charge thousands.”

With a greater number of festivals competing for talent, it’s become a sellers’ market for artists. According to Gorham, these days some bands are doing fewer festivals because they know they can make the same amount of money in a year for fewer shows.

Gorham says that as long as the sun is shining Bestival still runs at a similar profit margin as it did five to ten years ago. He says that ticket price increases – around £10 a year – are down to the bill for talent going up as well as other costs including insurance, security and infrastructure. He says the police have also gone from seeing Bestival as a nuisance to seeing it as a cash cow.

“We don’t scrimp on making the festival look great. My wife spends six-figure sums making the show look incredible,” he says, referring to everything from the festival’s hand-made Indian tents to its pyrotechnics, “We always sweat about putting prices up, we want to keep them the same but at the end of the day it’s just economics.”

FACT spoke to several festival managers who all said that they face cost increases over and above inflation on ticketing, security and the health and safety provisions associated with keeping their festivals up with industry-wide regulations, which have become tighter after recent tragedies. Despite this, the managers said that their profit margins had either stayed the same or decreased and that they take more of a hit on these costs than festival-goers do.

“With a greater number of festivals competing for talent, it’s become a sellers’ market for artists.”

One of them is Chris Greenwood, veteran of the UK festival circuit and owner of Croatia’s Stop Making Sense festival. “Raising prices could price me out of the market,” he says. “Everyone has tightened their belts.”

“DJs want to make hay when the sun shines because they rely on live sales and don’t necessarily have careers as long as they used to,” he explains. “When they’re hot they really milk it.”

UK festivals have become less squeamish about turning to corporate sponsors due to cost pressures, says Greenwood. “Before Stop Making Sense I did 80 festivals for Bacardi,” he said. “I used to run the B-Bar which was probably one of the first brands to take dance music to traditional festivals like Oxegen, Reading, Glasto and T in the Park.”

“The first time I did Glasto we nearly got tarred in feathers! ‘Bacardi at Glasto?! Shock horror!’ But now it’s all a brand-fest.”

The economic downturn has resulted in less sponsorship money to go round and with UK festivals facing tighter margins they are increasingly all too happy to sign up to sponsorship deals when they do come along.

The downturn is arguably also the most important reason behind the results of the MSN survey, says Steve Machin, founding director of specialist ticketing consultancy firm Stormcrowd. “The survey claimed that young people were saying they don’t have the spare cash to go,” he explains. “It drew an assumption that the cost of festivals is the reason.”

Machin thinks that macro-economic factors are the biggest reasons for young people finding festivals unaffordable, namely youth unemployment and the cost of other things that young people spend their money on, for example food and housing. This could explain why the average age at UK festivals has gone up as older, more affluent punters replace younger attendees.

He suggests that the “inflection point on the macroeconomic cycle might have been hit where young people can’t afford a whole host of things including music festival tickets.”

The true story behind the MSN figures is a mixture of piracy pushing up the price of live music and a generation of younger people that is likely to be poorer in real terms than the one that preceded it.

In many ways the news may be worse than the MSN survey suggests: not only can young people not afford to go to festivals, they can’t afford to do anything.

Head here to read FACT’s How To…Run A Festival And Not Go Bust guide, featuring contributions from the founders of Glastonbury, Sonar, Exit, Dimensions, MUTEK and many, many more.