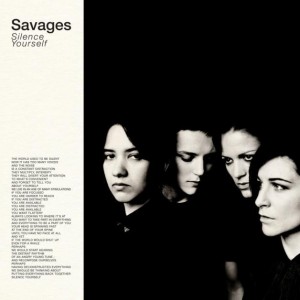 There’s not much about Savages’ music that you could call wildly original. Like their Matador labelmates Cold Cave and Interpol, they can be derivative to a fault, but unlike those bands their music is backed up by a strong ideology and compelling personality. That’s part of debut album Silence Yourself’s appeal: though Savages wear their influences proudly, they have an individual voice. In that sense, Silence Yourself isn’t just a technical throwback to post-punk and no wave, but also to a time when music had something to say, when bands had names like Gang Of Four and Joy Division.

That last is the most obvious of Savages’ inspirations, but The Birthday Party, Mission of Burma, Wire, Die Form, Siouxsie and the Banshees and Bauhaus are others that spring to mind immediately upon hearing Silence Yourself. It’s in the coarse, stark, blunted instrumentation; the moody, any-colour-as-long-as-it’s-black aesthetic; the snarled vocals and the grimacing attitude. But where the earlier bands took their lyrical and thematic cues from an anarchic, subversive politics or inner darkness and failure, Silence Yourself addresses the dynamics of human relationships, sexuality, violence and the self (rather like Throbbing Gristle in this respect). It’s something both the poem-like announcement on the album’s cover (actually lyrics from opening song ‘Shut Up’) and the manifesto that accompanies the album underline. “If the world would shut up,” the cover reads (in ALL CAPS, naturally), “Perhaps / We would start hearing / The distant rhythm / Of an angry young tune.”

‘Shut Up’’s title alone should indicate how Silence Yourself doesn’t obfuscate but packs all the blunt force of a kick to the solar plexus. The chorus – “If you tell me to shut up / I’ll tell you to shut up” – evokes both the fierce will to independence and truth to the self that constitutes the album’s ideological lifeblood. Where ‘Shut Up’ is precise, ‘City’s Full’ is a maelstrom of distortion, and ‘I Am Here’ is all vocal and brutal tom-drum until distorted guitars explode for the chorus. The messiest, most abrasive song on Silence Yourself,  the one-take live track ‘Hit Me’, clocks in at just over one and a half minutes. “Tell me I’m miserable now… he hit me / And that was the best I ever had” sneers frontwoman Jehnny Beth, inverting the victimisation of The Crystals song whose title the lyrics recall; the power, unexpectedly, is in the hands of the masochist. The intimacy of ‘Hit Me’ becomes alienation in ‘Husbands’. Opening with the line, “I woke up and I saw the face of a guy / I don’t know who he was”, Beth adopts a Patti Smith shriek for the chorus (“My house / My bed / My husbands, husbands, husbands, husbands, husbands, husbands, husbands”) that divorces word from referent, effecting distance where you would expect closeness.

‘Dead Nature’ and ‘Marshal Dear’, look inward, though what they lack in primal urgency they make up for with ominousness. The drones and church bells of ‘Dead Nature’ sound as if they’ve been recorded in a dank cave and ‘Marshal Dear’ is the only song on the album to feature a piano and a sax. Beth’s voice here recalls To Bring You My Love-era PJ Harvey’s silken-yet-raw howl as she yelps the refrain “Silence yourself”, hammering home the need for honesty to the self.

Part of the manifesto sent out with the album reads as follows: “SAVAGES is not trying to give you something you didn’t have already, it is calling within yourself something you buried ages ago”. It’s the closest you’ll get to an apology for unoriginality from a band that doesn’t apologise. Whether you’ll enjoy Silence Yourself depends largely on your taste for post-punk and no wave; Savages may draw inspiration from some of the best alternative music of the last thirty years but they can be derivative to a fault. That said, their obvious musical talent and distinctive voice make Silence Yourself an uncompromising and very enjoyable paean to individual agency.