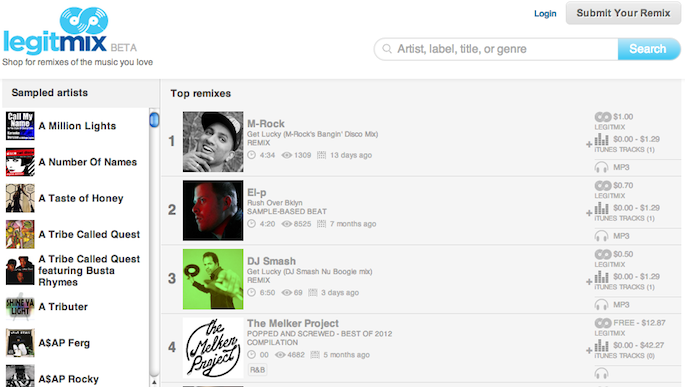 Company promises a legal way to remix without having to go through the traditional sample-clearance process.

First launched last year, Legitmix has announced a new digital storefront and a remix-only search engine dubbed Discovery. Legitmix allows remixers to sell their work, while ensuring that sampled artists get credit and payment, and Discovery aims to aid in that process.

“The traditional sample-clearance process makes it impossible for most remixes to be released legitimately, so the remix community built and underground ‘economy of free,'” the company says in a statement. “Unfortunately, this has led to a feeling that remixes have no value. We believe people will pay for remixes to support remixers and the artist they sampled if given a way to do so.”

Citing Diplo, El-P, and moombahton creator Dave Nada among their supporters, Legitmix calls Discovery a “Google for remixes.” In the browser-based search engine, each remix links to sampled tracks, allowing users to use the original tracks in their own creations; if they don’t have the song, Legitmix sends users to iTunes so that remixees can get paid. The Discovery service is running now on Legitmix’s site.